The Hierarchy of Incidents and Learning: Part I 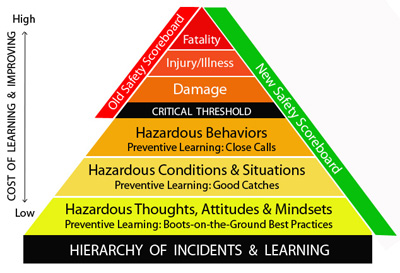 You just want to do the job right and go home unharmed today, but things don’t always go as planned, incidents happen, and the lessons your team learns don’t always change the way you’ll do the job tomorrow. This can leave you feeling frustrated and helpless to improve the things that keep your team from reaching its full potential.

You deserve a framework that allows you to continuously improve your operations and team morale. In this two-part article, we’ll use the hierarchy of incidents and learning to identify and rank the different parts of an incident. As we work through all six levels of the hierarchy – the first three in this article and the next three in the follow-up article – we’ll discuss things you and your team members can do to support a continuous growth mindset. The ultimate goal of all this is to learn and improve so that we can identify and mitigate the potential for error as soon as possible and reduce the impact of incidents on our people, projects, company and customers.

The first three levels of the hierarchy – and the three levels with the lowest cost of learning and improvement – are hazardous thoughts, attitudes and mindsets; hazardous conditions and situations; and hazardous behaviors. Now, the cost-of-learning concept centers on the idea that the higher up the hierarchy’s pyramid you go, the greater an incident’s direct and indirect costs to workers, the project, the company and the customer. For example, the cost of changing individual and team thoughts, attitudes and mindsets – found at the lowest level of the hierarchy – is less than the cost of a root cause analysis, systems and procedures inventories, and companywide change associated with incidents that harm people, places and things.

Hazardous Thoughts, Attitudes and Mindsets
Let’s take a closer look at the first level of the hierarchy. Our thoughts determine our attitude about someone or something. My attitude turns into a mindset. My mindset eventually leads to behavior, which creates reactions and results in the world around me. That cycle continues, becoming deep-rooted, for better or worse. A positive mindset helps lead to positive reactions and results, but a negative mindset, at best, prevents us from reaching our full potential. At worst, it can lead to devastation.

Leading Indicator Learning and Improvement
We can battle hazardous thoughts, attitudes and mindsets by bringing them into the light, talking about them and countering them with the positivity associated with industry best practices. But first, we must recognize them. Negativity often shows up in meetings and throughout the workday as sarcastic or cynical comments made by workers who have an ego-driven, production-only mindset that sounds something like, “I know better. We don’t need to follow those rules and procedures. If we do it like that, we’ll never get anything done.” Or, there’s that kind of worker’s complete opposite, the helpless victim, who has a “There’s nothing we can do about this, so why try?” mindset. Both types complain about people they have no intention of confronting and conditions or situations they either cannot or will not improve. That’s what we call gossip, and it’s a cancer that eats away at team morale and limits our ability to (1) see and hear the good around us and (2) recognize the hazardous conditions and situations that can lead to damage, injury, illness and death.

However, we can proactively counter hazardous thoughts, attitudes and mindsets with positive reinforcement of boots-on-the-ground best practices that are captured in our daily coordination meetings, after-action reviews, safety group crew visits and weekly safety meetings. By sharing those best practices, we’re able to reinforce what’s right – the way we do things around here –thus fertilizing and watering the good operational grass so that a positive, healthy lawn can choke out the weeds. We’ll discuss exactly how to deal with negative individuals a little later in this article.

Respect is a key word when it comes to recognizing hazards. It’s based on an individual’s assessment of value, which determines how much time and effort they’re willing to expend on understanding and mitigating a hazard. The more the individual sees the hazard as a risk to accomplishing the mission, the more time and effort they’ll be willing to invest in mitigation. How do we show respect? We stop work if it’s already begun, identify the issue, create a plan for mitigation and communicate it to everyone affected so we can overcome the hazard. We’ll see the concept of respect come into play more in the next level of the hierarchy, hazardous behaviors.

Hazardous Behaviors
In this context, a “behavior” is how we act toward the job before us, in the conditions and situations that surround us. Hazardous behaviors are rooted in disrespect toward yourself, your co-workers, the project, the company and the customer. Now, because hazardous behaviors don’t always lead to damage, injury, illness or death, it can sometimes be tempting to dismiss them as unimportant, but that creates what’s called confirmation bias, which is a fancy way of saying, “This didn’t cause a problem yesterday, so I’ll do it again today, and tomorrow I might push the limits a little further.” This leads to an ever-decreasing level of respect for the surrounding world, which eventually can end in disaster.

Leading Indicator Learning and Improvement
We can battle hazardous conditions, situations and behaviors by dealing with them in a clear, concise and timely manner. When it comes to learning so we can improve, we want to capture hazardous conditions and situations as good catches (i.e., we caught them before anyone was exposed to risk) and hazardous behaviors as close calls. Both should be centrally collected by the safety group, organized into lessons learned, and communicated to the entire company as a part of the weekly safety and daily coordination meetings.

However, while good catches and close calls are effective at helping workers self-correct, there are times when a leader must directly deal with the hazardous behaviors of an individual or the entire team. We will want to consider three things – timing, audience and content – when doing this.

Audience
Is this a behavioral issue involving one or two workers that should be handled privately, or is it a team issue that needs to be handled in a full crew meeting? Keep in mind that on occasion, even individual or small-group issues need to be addressed with the entire team because they’re already well-known and eating away at team morale. In my experience, though, it’s best to try to deal with these situations in private and then reinforce the desired behavior within the entire team.

Resolving problems that involve ignorance and/or disrespect of hazards often requires training and motivation work. Make the hazards real for workers through stories and testimonials from people who once thought the way they’re now thinking, disrespected the hazards around them and paid a high price; it’s vital to do so if you want to see improvement. Additionally, when it comes to having a conversation with a worker on the topic of disrespecting hazards, I usually begin with this question: If your son or daughter were hired onto the crew tomorrow, would you let them do what you just did? The answer is usually no. Then I remind that individual that they’re someone else’s loved one, and that person is counting on them to do the job right and go home unharmed today. At the end of the conversation, I ask for an agreement from the worker that they’ll do the job right from there on out.

Disrespect of processes and procedures may require additional training, coaching and motivation work to help a worker turn expectations into execution. They must understand that following tried-and-true processes and procedures leads to long-term consistency that makes the individual and crew more valuable. I usually end a conversation on this topic by discussing with the worker what they might need to be able to transition to doing things the right way. I also ask for a commitment from them that they will work to continuously improve themselves and their work practices.

Disrespect of people is flat-out unacceptable, and that needs to be made clear to all workers from day one. It should be reinforced on a daily basis by demonstrating appreciation for the value each worker brings to the job. Everyone matters because every task matters. I usually end a conversation on this topic with something to the effect of, “There are a lot of things we can say and do as we interact with each other today, but disrespecting someone isn’t one of them.” And then I ask for the worker’s commitment to treat people with respect going forward.

Next Steps
To get to the next three levels in the hierarchy of incidents and learning – damage; injury and illness; and fatality – we must cross a critical threshold: the one between potential issue and direct harm. The latter historically has been considered the scoreboard (lagging indicator) by which we measure our level of safety. We’ll tackle all of that in the second part of this article.

In the meantime, by staying mindful of and continuously addressing the bottom three levels of the hierarchy of incidents and learning, you can lower the likelihood that damage, injuries, illnesses and fatalities will occur on your crews. And that means both you and your workers have a greater chance of going home happy and unharmed today.