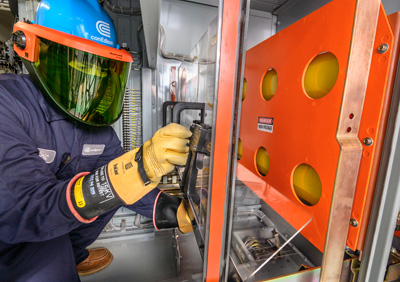 All of us who work with electricity know how hazardous it can be. During a stint with my previous employer, a co-worker and good friend was electrocuted and killed when he made contact with energized switchgear components. Another co-worker at the company also was seriously injured. Safety is always a part of our job; it’s something we talk about and practice every day, but given what happened to my two former co-workers, I felt that more needed to be done to establish a zero-accident workplace – more than just job briefings, using human performance tools and “living safely.” When it came to working with switchgear, it was necessary to develop a tangible safety device that could be paired with work practice improvements.

Several years later, after starting my current employment at Con Edison – a regulated utility that provides electric, gas and steam service to customers in New York City and suburban Westchester County – a simple request to pursue a solution prompted an effort to reform switchgear work practices. The result has made those practices both safer and more efficient – not just at Con Edison, but potentially for the industry.

At Con Edison, a team of subject matter experts on medium- and high-voltage breakers meets quarterly. The team is involved in ensuring the reliable performance of the utility’s breaker fleet. During one of the quarterly meetings, Joe Szabo, a senior engineer in the Equipment and Field Engineering Department, raised a concern about recent operating incidents in which cubicle maintenance had been identified as a contributing cause. Discussions in the peer team meeting evolved into a much more regimented approach toward maintaining switchgear cubicles. At the time, however, Con Edison’s work practices required bus section outages. Since those outages reduce system reliability, our team determined that implementing our desired comprehensive cubicle maintenance program was highly unlikely.

So, how could we avoid bus section outages and perform cubicle work while increasing the safety of our mechanics? The team decided an improved maintenance barrier was the solution, which would prevent mechanics from making inadvertent contact with live bus work. Szabo, the team’s facilitator, asked for volunteers to support the development effort, expecting hesitancy due to the effort required, but I immediately asked to participate. My mission was to help develop this tool in honor of my fallen co-worker from my previous job.

A skilled fabricator was then needed to help develop a prototype. Szabo knew exactly who to call within Con Edison: Matt Johnson, a senior designer in Construction Services, who has a special ability to bring ideas to life. Johnson worked diligently with the team for more than 18 months, developing and testing multiple prototypes to reach the final design.

The CIRS Device
The result of all those months of work is the Cubicle Inspection & Repair Safety (CIRS) Device, which provides a safer work environment within switchgear cubicles by eliminating the risk of accidental contact with energized bus components. Proven to be safe and reliable at Con Edison, the device enables mechanics to safely perform inspections, preventive maintenance and corrective maintenance on most components within the cubicle without a bus section outage, which would require coordinated de-loading and field switching. This results in:

Mechanics inspect cubicles, visually examining the work area for dirt and debris. They look at the bus components – where possible – for signs of pitting, arcing and wear. The mechanics also are responsible for removing old grease, re-lubricating components and performing operational checks of the racking/shutter mechanisms. In addition, components inside the cubicles sometimes fail and need to be repaired or replaced. Secondary blocks, auxiliary switches, heaters and racking mechanisms/chains/linkages occasionally require attention. All of these tasks take place in cubicles that are very tight on space; only one mechanic can enter or work in a cubicle at a time.

The problem with doing this kind of work is that you can’t safely and effectively see behind the shutters without taking an outage or installing a safety barrier such as the CIRS Device. Also, much of the inspection and repair work inside a cubicle requires assuming unnatural positions in a small space, which can easily expose a mechanic or an electrician to an electrical contact, a shock or an arc flash. The smallest hairline crack in a feeder tube or bottle surrounding the energized bus could be the difference between life and death.

To summarize, prior to the development of the CIRS Device, safety barriers for cubicle inspection and repair were inadequate, not application specific, and unsafe or inefficient while the mechanic operated the racking/shutter mechanisms. Unstable and constructed flimsily, the barriers blocked access to components requiring inspection and occasional repair, thus necessitating bus section outages.

The CIRS Device developed at Con Edison effectively protects workers from the unknown, allowing them to work safely on components without the need for bus section outages.

Research and Development
Sergo Sagareli, a senior engineer in Con Edison’s Research and Development Department, helped support the team throughout the development of several CIRS Device prototypes, field testing and trials. The final proof of concept was eventually tested in a simulated worst-case scenario. Sagareli and the team brought the CIRS Device to DNV GL laboratories in Chalfont, Pennsylvania, where testing was performed on the material properties to see how the device would handle a 63-kA arc flash event.

The full-simulation testing was performed with the CIRS Device installed in a switchgear cubicle. A 63-kA fault – Con Edison’s specified short-circuit rating for substation equipment – was applied to the bus (i.e., three phases of bus were tied together with bonding wire). A mannequin wearing standard issue 12.4-cal/cm2 HRC 2 FR coveralls, a hard hat and gloves was placed in the cubicle. The mannequin was used to simulate a mechanic performing corrective maintenance, such as replacement of a MOC/TOC (auxiliary) switch or a secondary block repair/replacement. The test exposed the cubicle, device and mannequin to a >63-kA flash for an approximate six-cycle (94-millisecond) duration.

The goal was to prove that an installed CIRS Device would not contribute additional harm to a mechanic working within a cubicle if a high-energy arc flash event were to occur. The data showed that the generated arc flash blast was approximately 7 megajoules. During the blast, the three polycarbonate panels of the CIRS Device separated from each other; however, the panels themselves remained intact despite exposure to an extremely high level of energy. The majority of the molten copper and heat was absorbed by the device’s polycarbonate material (copper splatter and carbon soot covered the exposed areas). Although the mannequin was pushed out of the cubicle by the pressure of the blast, the device acted as a shield, significantly lessening the potential damage from the blast and molten metal.

Field Application
The first field application of the CIRS Device took place in January 2019 at one of Con Edison’s 13-kV substations, where a bus section was taken out of service to replace a failed transformer. While attempting to restore the bus section, the circuit breaker wouldn’t charge. As a result, it couldn’t safely be closed. When the circuit breaker was removed from the cubicle, a visual inspection revealed that the secondary contact block was damaged, with burned pins and wires requiring repair.

Working as a team, the mechanics, operator, supervisors, planner, safety specialist and I made sure everyone understood the instructions on how to use the CIRS Device. It was installed and used to safely and efficiently complete the repair without the need for a bus section outage. All of our goals to improve safe switchgear work practices were achieved: high hazard injuries were avoided, system reliability risk was diminished, and there were significant cost savings for the utility.

In total, the CIRS Device was used by Con Edison 15 times in 2019 for corrective maintenance repairs to enhance safety while avoiding a bus section outage.

Next Steps and Cost Savings
Our goal for this effort is to change industry culture and the workforce’s mindset regarding the way switchgear cubicle inspections, maintenance and repairs are performed. We want to make sure that our employees and anyone else working in switchgear cubicles can do so safely – every day, every time, in every situation.

Our team was fortunate to connect with Con Edison’s Innovation Hub and Eric Davis, a senior analyst, whose support as business development lead and co-project manager has taken the CIRS Device effort to the next level: working toward commercialization. Con Edison is currently working on a partnership to manufacture the CIRS Device for all switchgear applications, both for us and our industry peers.

The first application was designed specifically for General Electric PowerVac and Powell Industries Power/Vac applications. The CIRS Device was designed and patented (pending) to be scalable. With simple modification of its size, this innovation can easily be applied to all motor control center, low-voltage and medium-voltage switchgear applications. The next iterations – the Hyundai HVF switchgear application followed by the General Electric Magne-Blast – underscore the possible use of the CIRS Device for all switchgear.

Lastly, using the CIRS Device for corrective maintenance has saved Con Edison $5,000 to $50,000 per use, depending on the case. The device is now regularly used by the utility for inspections and preventive maintenance, resulting in long-term equipment performance improvements without the work activities adversely impacting system reliability. Most importantly, and why this is such a passion project for our team: Our co-workers in switchgear cubicles are now safer, which is priceless.

About the Author: Eric M. Fell is a specialist in EH&S Safety at Con Edison, working on the development, analysis and implementation of safety technology and innovation improvements to reduce injuries and achieve a zero-harm environment. In addition to his role in EH&S, Fell has several years of experience as a substation operations and maintenance supervisor and as a field engineer throughout the industry. He can be reached at felle@coned.com.

Eric M. Fell is a Specialist in EH&S Safety at Consolidated Edison Company of New York (Con Edison) working on the development, analysis and implementation of safety technology and innovation improvements to reduce injuries and achieve a zero-harm environment.  Prior to being a specialist, Eric was a Substation Operations Supervisor providing oversight and execution of operations, maintenance & construction activities within transmission and distribution substations (13kV – 345kV).  Beyond his normal duties, Eric is considered a subject matter expert (SME) in Low and Medium Voltage circuit breaker maintenance and troubleshooting at Con Edison.  He brings a wealth of knowledge from his experience as a Substation Supervisor at New York State Electric and Gas (NYSEG) and as Field Engineer for General Electric Industrial Solutions.  Eric holds a Master’s Degree in Renewable Energy & Sustainable Systems from Penn State University and a Bachelor of Science from Roger Williams University.