Take Your Time and Follow the Rules – Or Pay the Price 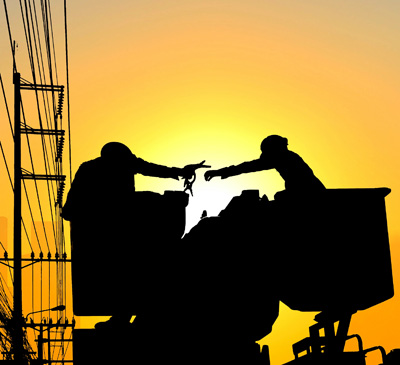 The last time we met Bob the foreman and his crew, they saved the day when a vehicle hit a utility pole on a busy roadway in Safety County, New York (see https://incident-prevention.com/blog/safety-concerns-when-setting-wooden-utility-poles).

These days, Bob and his crew are still in action, working for Sunshine Electric Co. At Sunshine, following company safety rules and industry best practices is as normal as breathing air. On this particular day, we find Bob prioritizing the unending string of planned field work assigned to his crew. His first priority for Sunshine’s customers is the list of new services and reliability jobs. As a supervisor, he also has priorities for the safety of his crew. But that’s not all. Because of his training, he knows that safety compliance to protect his employer is another one of his responsibilities as a supervisor. That is a lot of responsibility, but Bob and his crew were safely trained by Sunshine, and Bob has communicated his expectations to the crew for their safety.

Bob selects a job from the list that involves installing a new transformer on a replacement pole. The existing pole is too short to accommodate the additional facilities that must be attached, including the new transformer to feed a customer’s premises. A new, taller pole must be installed. Bob gathers his crew and explains what the job is all about. He then releases the paperwork so that the linemen can gather the new pole and all the other materials necessary for the job. He will meet them on-site in a little bit.

The crew knows that no-nonsense Bob – a foreman with many years of experience – is a tough and demanding but very compassionate guy. Over the years, his co-workers have nicknamed him “By-the-Book Bob” and the “S&P Boss” – “S&P” standing for “safety and productivity.” Now that the linemen are getting ready to head to the job site in their fleet trucks, they know Bob’s expectations and, by habit, follow Bob’s basic CSS rule. The three components of the rule are:

When Bob gets in his pickup truck and drives to meet everyone at the work site, he makes himself an example by following his own CSS rule. Upon his arrival, he meets up with his crew and the assigned, certified flaggers. Bob and the group then proceed to discuss the daily job briefing. He will not allow a dull, plain briefing from his crew members, so he encourages all personnel to actively participate and ask questions. Bob also assigns a junior lineman to moderate the briefing and to later fill out the daily job briefing form. The point of these actions is to ensure group discussion of all job site risks, hazards and mitigation efforts.

Fall Protection, Hazard Communication
After the briefing, all crew members, including the flaggers, sign the briefing form to acknowledge their understanding. Bob then reminds the linemen about fall protection, making sure they remember to:

At this point, Frank, a senior journeyman lineman, contributes to the meeting by reminding the group what they learned in their last weekly safety meeting: “Duty to have fall protection” (OSHA 29 CFR 1926.501) was the No. 1 most-cited OSHA violation from 2014 to 2019.

With those reminders fresh in their minds, Frank and the rest of the crew begin digging the hole for the new 50-foot pole. About halfway through the task, they encounter rock croppings in the hole. They stop their work and discuss with Bob the best way to address the issue. It is eventually decided that the crew will use a chemical solution that splits up the rock. Mike, a junior journeyman lineman, is assigned the job of bringing the product to the job site.

After he does so, Mike proceeds to examine the labels on the container. He is aware of how important it is to read and follow the instructions found on a chemical’s material safety data sheet, which lists hazards and protective measures. Bob commends Mike for his diligence in adhering to safe work practices. After all, Bob is aware that failure to follow regulations found in 1910.1200, “Hazard Communication,” was the No. 2 most-cited OSHA violation from 2014 to 2019.

Next, Mike and his crew apply the chemical solution to the rock and wait for it to do its work. The group then removes all the rock fragments and continues digging the hole to its required depth. After the hole is dug and covered, the crew safely breaks down the setup and takes their lunch break.

Scaffolding, Respiratory Protection, Lockout/Tagout
While taking his break near the job site, Larry, a 7th-step apprentice, notices an unlevel scaffold that’s being used by construction workers across the street as they brick point a wall façade on a new building. The scaffold is hanging from a parapet wall at about 15 feet above the ground. In addition, guardrails are missing; weak, bowing planking can be seen; and the construction workers are not wearing adequate personal protective equipment. As Larry observes the scene, he also realizes that the scaffold has been erected too close to a nearby energized electric power line – fewer than 10 feet away. He recalls that improper use of scaffolding (see 1926.451 in Subpart L, “Scaffolds”) has been the No. 3 most-cited OSHA violation in the last six years and chooses to inform Bob about what he has seen. Bob then makes a visit to the construction site to alert the crew there of the problems and potential hazards that both he and Larry noticed.

After the lunch break is over, Bob’s entire crew returns to the job site. Proper rubber-up work is done on all energized electric lines, phase conductors are spread out, a pole cover is placed on the new pole, and then the digger derrick truck is grounded to the system neutral and barricaded. The new pole is lifted, guided to the hole by the linemen wearing their PPE, and set and tamped in place.

While the crew works on transferring the conductors to the new pole, Bob realizes that there is a change order in the job folder for building a new secondary riser. Since the secondary conductors go into a nearby manhole, and two linemen must enter the underground structure to set up the cable pull, Bob wants to make sure that all underground entry procedures are accurately followed. He knows that in order to protect the employees from entering a potentially hazardous manhole environment, respiratory protection is required. Workers must be fit tested and qualified to work in such situations. In the last five years prior to 2019, failure to adhere to the rules of 1910.134, “Respiratory Protection,” was the No. 4 most-cited OSHA violation. So, Bob arranges for the structure to be properly ventilated to assure that the linemen can enter the manhole to do their jobs safely.

Once the secondary riser cables are pulled and the steel riser pipe is grounded, the conductors are attached to the leads off the new transformer already placed on the pole. Before the transformer primary leads are connected to the energized 13-kV primary circuit, Frank reminds the crew that the electric control center must be called to sign on the feeder. Lockout/tagout procedures need to be followed to control hazardous energy and ensure the safety of the linemen working on the feeder. Bob agrees and mentions that lockout/tagout procedures that are not done properly – or not done at all – represented the No. 5 most-cited OSHA violation in the five years prior to 2019.

Conclusion
Everyone would like to have a “Bob and his Sunshine crew.” This story is lighthearted, but the consequences of a workplace without Sunshine’s perfect storyline are serious. Not only does a culture of safety afford a purposeful safety performance that will reduce employee exposures, but the activities of the crew also protect the employer from serious business consequences. If Sunshine is a contractor, a bad safety record can put the company and crews out of business. In 2020, the maximum cost per OSHA penalty is $134,937 for a willful or repeated violation; $13,494 for a serious/other violation; and $13,494 per day beyond the abatement date. In addition to the high cost of penalties, contractors with bad safety numbers don’t even get to bid new jobs. So, as Bob the foreman always says, “It is much better to follow the rules, take your time to do the job right the first time – no shortcuts – and return home from work with all 10 fingers and all 10 toes.” That’s good for everyone.

About the Author: Luis Ortega, CUSP, previously worked for Northline Utilities LLC as a safety specialist. Prior to assuming his last role, he retired from Consolidated Edison Co. of New York after a 30-year career. Ortega holds a technical certificate from Power Technologies Inc. and earned a bachelor’s degree in civil engineering from The City College of New York. He can be reached at ortegal1957@gmail.com.