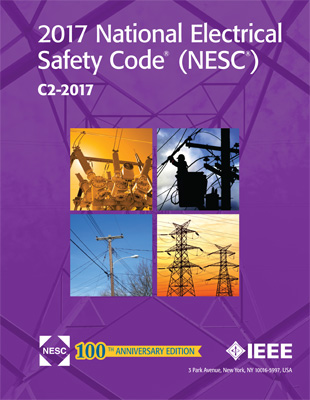 The National Electrical Safety Code is a referenced standard to OSHA 29 CFR 1910.269. A referenced standard means it is a voluntary consensus standard that OSHA recognizes as a means to help the employer meet the requirements of the OSHA rules. OSHA will not cite an employer on the basis of an NESC provision, but the agency may use the NESC as evidence the employer knew a hazard existed and may have been prevented using the provisions of the NESC.

The 2017 edition of the NESC was released earlier this year. It has been reorganized for easier use and includes a number of changes and exceptions to rules, as well as the introduction of some new, useful tools to help users more easily access and utilize NESC content. The latest edition follows a tradition to ensure the continued practical safeguarding of persons and utility facilities during the installation, operation and maintenance of electric supply and communication facilities. NESC Part 4 is the pertinent section for lineworker safety, and it has been revised fairly extensively. The following summary of the changes can be a useful guide for those directly impacted in their daily work.

Arc Hazards
NESC Part 4 rules include a section on arc hazards that was updated in the 2012 edition. At that time, a new low-voltage arc flash table was added that coincides with the rules in the code related to arc hazard analysis. This table has been further modified in the 2017 edition of the NESC. The table, numbered 410-1, is based on recent industry testing performed with the Electric Power Research Institute and Pacific Gas and Electric Co., and now includes more detailed information, primarily on 480-volt arcs.

Revisions have also been made to Rule 410A3 to help ensure that employers perform an assessment to determine the potential exposure to electric arcs for their employees when they go to work on energized lines or equipment. This rule is used to help determine the flame-resistant and other types of personal protective equipment that is necessary. Exception 4 has been added to the rule to help employers and employees understand when protection is needed for the head and face.

Fall Protection
The 2017 NESC includes changes to Rule 420K for fall protection. These changes are important because OSHA introduced revised fall protection requirements in 2014. In addition, information was sourced from IEEE 1307, the guide for fall protection issued by the IEEE Engineering in the Safety, Maintenance and Operation of Lines (ESMOL) subcommittee, as well as other industry expert sources. Notably, Rule 420K requires employees to use appropriate fall protection equipment while climbing or working on poles and towers unless doing so is not feasible or creates a greater hazard than doing so without such equipment.

Minimum Approach Distances
Another major change to the 2017 NESC are revisions to the minimum approach distance rules. Specifically, this is Rule 441 for electric utility workers and electric supply workers. Terminology has also been added that better defines and clarifies the meaning of the terms “reach” and “extended reach,” which came about due to comments and questions received during the review cycle.

Rule 441 has been revised to include new and improved rules for working on lines energized at 72.5 kV and above. This is important because live-line work is always of interest to people, although the NESC includes rules in Part 4 addressing both energized and de-energized line work. Again, efforts were made to align with OSHA rules in this area, as well as IEEE 516 – “IEEE Guide for Maintenance Methods on Energized Power Lines” – a standardized guide that, among other things, addresses minimum approach and how to calculate it. As a result, Rule 441 now provides very clear and understandable language for electrical workers to follow. What’s more, the corresponding tables, primarily focused on AC live-line work, have been updated based upon new calculations that came out of the IEEE ESMOL subcommittee, as well as OSHA.

Default Table 441-1 reflects the minimum approach distances for performing AC live-line work and is aligned with Tables R-6 and R-7 in OSHA 1910.269. Minimum approach distances have increased fairly significantly for voltages over 169 kV compared to the previous table published in 2012. Table 441-1 is a default table. Unless specific calculations are performed for voltages 72.5 kV and above with a calculated (known) maximum anticipated per unit overvoltage factor (T), the distances expressed in this table would apply.

A new table has been added to Rule 444 that addresses de-energizing equipment or lines. Rule 444 has been expanded and the new table, 444-1, lists minimum clearances for air gaps. This addition came about because utility workers are known to protect themselves from being energized from other sources by opening taps to create open air gaps in lines. When opening a tap and de-energizing a line segment, a question arises: How much separation should exist between open taps on an otherwise energized line? This information is expressed for voltages between 1 kV and 72.5 kV.

New Ancillary Materials
Something completely new and useful for the latest edition of the NESC is the upcoming introduction of the NESC 2017 App, which will be available for iOS, Android and Windows, providing easy access to the code via a mobile device or tablet. For those in the field, the new app is a handy and comprehensive reference source that includes all of the content of the printed code with enhanced features, including:
• Easy access to all Parts, including Front Matter of the NESC.
• All referenced diagrams, charts and drawings.
• Instant access to formulas, equations and calculations with context.
• Ability to quickly look up terms using the Dictionary feature.
• Access to media related to the NESC.

Another important and useful ancillary item for the 2017 NESC is the 2017 NESC Handbook, Premier Edition, which includes commentary by contributors and represents a next-generation tool for professionals who want to improve their understanding of the NESC. It includes a representation of NESC text and gives users insight into a history of the NESC’s rules; insight into how the rules might be applied; interpretations; background interspersed and coincident with the represented portions of code being discussed and highlighted; and responses to change proposals during the past 90 years. Included in the ancillary items are NESC Tabs, a set of 48 durable, self-adhesive tabs that are compatible with both the NESC 2017 Edition and 2017 NESC Handbook. The tabs are color-coded to make locating important information fast and easy. The set includes easy-to-affix preprinted press-and-stick tabs and blanks for individual notations.

These are just a few highlights of the changes to the 2017 edition of the NESC that impact lineworkers. The most recent NESC Workshop was held October 18-19, 2016, in San Antonio, Texas. The purpose of the workshop was to kick off the 2022 edition of the NESC and identify topics for working groups to discuss and develop for the next edition. To learn more about the NESC and related products, visit www.standards.ieee.org/nesc/.

About the Author: Sam Stonerock serves as an Edison Electric Institute principal representative and secretary for NESC Subcommittee 8 on Work Rules. He is also a member of IEEE’s Power and Energy Society and Industry Applications Society. Stonerock has served as Southern California Edison’s principal representative on transmission and distribution and as second vice chair for ASTM International’s Committee F18 on Electrical Protective Equipment for Workers. He is a member of the National Fire Protection Association and ASTM F18’s voting alternate for Committee 70-E on Electrical Safety in the Workplace. Additionally, Stonerock chairs California’s General Order 95/128 Rules Committee, and he is a 30-year employee of Southern California Edison, with a work history in distribution construction, contract development and administration, T&D standards development and state and national regulatory support.

About the NESC: Published exclusively by IEEE and updated every five years, the National Electrical Safety Code sets the ground rules and guidelines for practical safeguarding of utility workers and the public during the installation, operation and maintenance of electric supply, communication lines and associated equipment.