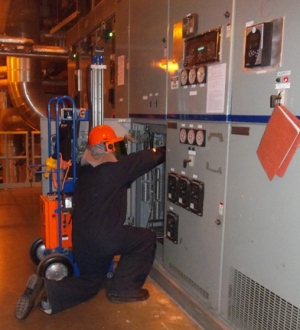 Developing safe electrical work practices for generation personnel is an evolutionary process that can become extremely complex. South Carolina Electric & Gas Fossil/Hydro (SCE&G F/H), which includes nine large generation facilities and several other small peaking gas turbines and hydro units, quickly learned that even the choice of consensus standards – either the National Electrical Safety Code or NFPA 70E – can be a matter of debate when determining electric generation safe work practices. Although SCE&G F/H had an existing electrical safety program, updates in 2012 electrical consensus standards, along with a request from the company’s electrical safety committee for assistance, initiated a program update that eventually resulted in a total rewrite of the existing program.

Prior to the update, the electrical safety program was geared significantly toward electrical and instrumental (E&I) personnel, as they historically performed the majority of electrical installation and maintenance work. Although E&I personnel work on electrical equipment, it was identified that other work groups interact with electrical equipment, possibly exposing group members to shock and arc flash potentials. Identifying all program stakeholders became a main focus of the program update process. The two largest stakeholders were determined to be E&I and operations personnel. Maintenance personnel, contractors and other lesser stakeholders were addressed throughout the process and were also included in the program.

During the development process, it became obvious that a one-size-fits-all approach would not effectively address the specific electrical issues of each stakeholder. E&I and operations electrical work are not the same, so it became important to develop an electrical safety program that would be effective for both groups. Operations personnel are highly trained in the safety processes required to operate the plant 24/7, but they typically have very little advanced training to identify electrical hazards when interacting with electrical equipment. To clearly identify and evaluate the risk mitigation strategies targeted at operations electrical hazards, a focus group was utilized to ensure uniformity among the entire organization. The following information focuses on lessons learned throughout the program update specific to the operations group.

Engineer Away the Hazard
The ideal approach to workplace safety is always to eliminate hazards. Breaker and switchgear technology has changed significantly over the last decade to mitigate the risk of arc flash injury. Management buy-in to employee electrical safety is crucial so that arc-resistant switchgear is purchased when switchgear must be upgraded due to being at the end of useful service, or if the need for an upgrade or replacement is identified through the engineering incident energy analysis.

It is also important to bring engineering and procurement groups on board to ensure the consideration of arc-resistant equipment is included in bid proposals. It is, of course, cost prohibitive to conduct a full-scale swap-out of vintage electrical equipment all at once, so it’s wise to first replace the most hazardous equipment, and then set long-term plans and budgets to achieve the goal of replacing other equipment. In the meantime, engineering controls, such as arc reduction switches, remote racking tools and other remote-operated devices, can be used to mitigate the risk to operations personnel.

Limit the Electrical Task Scope
Culture has changed significantly from the old days of doing whatever it takes to keep a unit running. SCE&G F/H employees are empowered to stop a job if it can’t be conducted safely, even at the risk of tripping a unit. The new electrical safety program limits the scope of electrical tasks that operations personnel can perform. For example, operators can no longer pull or install fuses in energized circuits, although one exception to this rule involves control power fuse blocks that are used in certain large breakers instead of control power breakers. In fact, operations personnel should only open breaker and switchgear cabinet doors for breaker position verification and breaker operation and/or racking operations.

If overloads are to be reset by operations personnel, this must be accomplished only from outside the cabinet door with installed push buttons. The most potentially hazardous electrical operation that should be conducted by this group is racking in/out breakers, sometimes up to 25 kV. Clearly defining electrical job expectations allows SCE&G F/H to target training to tasks that are actually performed by this group, and eliminates the risk of injury due to someone trying to conduct a task for which they are not qualified or rarely have an opportunity to perform. Any normal operation that changes in scope during performance by operations, such as a breaker sticking during a racking operation, is stopped, and appropriate E&I personnel are consulted for follow-up.

Procedures, Training and Qualification
Site-specific breaker racking procedures were developed and documented at each plant for each type of breaker/switchgear in use at that facility. Several plants have older units with many years of electrical upgrades. One plant had to develop 27 different breaker racking procedures because they had that many different types of 480-volt and 4160-volt breakers. To ensure future consistency, the company’s electrical safety committee has been assigned the task of regularly reviewing and updating the procedures.

Written qualification cards were also developed for each type of breaker. Operations personnel must demonstrate proficiency in performing the required tasks to become initially qualified to operate each type of breaker/switchgear. Qualification cards are reviewed at least annually to ensure they are complete, and at least one breaker type is selected for a documented inspection and review by management to ensure personnel understand and are implementing safe work requirements.

Develop and Post Breaker Job Aids
In the past, operations personnel were trained and qualified to operate and perform breaker racking operations with little or no knowledge of what’s hot and what’s not within the breaker cubicle. Electrical safety standards require much more detailed knowledge of exposure voltages and approach distances, so job aids were developed and posted for each piece of 600-volt-class switchgear and above.

Job aids are labeled pictures showing the inside of each cabinet/cubicle that operations personnel must enter to operate/rack (see example below). E&I subject matter experts identified energized components and voltage levels for these job aids because they have much greater knowledge of the breaker/switchgear operation. In most cases, the exposed electrical circuits of 4160-volt breakers/switchgear are limited to control voltages of 135 volts and below. This impacts the associated limited approach shock protection boundary that must be maintained within the breaker cubicle. Additionally, personnel can tell at a glance which specific components are energized and must be avoided by referring to the posted job aid before conducting the electrical task. 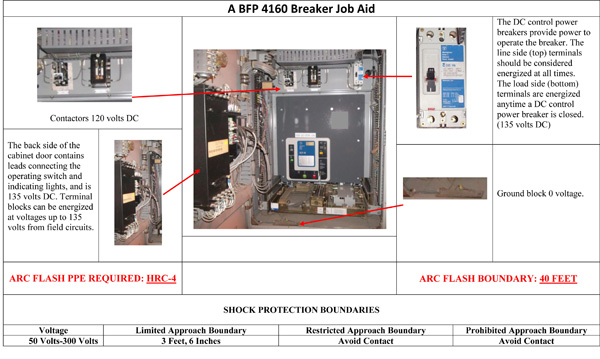 Job aids also assist operations personnel when completing a job briefing at the equipment. The plant operations group performs lockout/tagouts for craft work groups, and some large lockout/tagouts – such as ones for the entire boiler during an outage – may involve racking out and hanging locks/tags on a dozen or more breakers. Documenting an electrical job briefing before racking out each specific breaker was determined to be impractical for these cases. To meet this challenge, SCE&G F/H incorporated the electrical job briefing components of NFPA 70E into a beginning-of-shift, documented safety (pre-) job briefing for operations personnel. Instead of going over each specific shock and arc flash boundary during this job briefing, employees are required to refer to posted job aids prior to operating/racking breakers to review the specific hazards and ensure that appropriate boundaries are maintained during the operation. This is done during a second, undocumented on-site job briefing.

Proceduralize the Tribal Knowledge
Involving operations stakeholders in the electrical safety program development process uncovered some real-world scenarios that were used during program development. Some go above and beyond regulatory requirements, but could save lives if factors lead to an arc flash event.

Unfortunately, an SCE&G F/H employee was involved in a serious arc flash event while racking in a 4160-volt switchgear breaker during the program update process. The adage that PPE is the last line of defense came true. The 40-cal arc-rated PPE he was wearing saved his life. However, as stated in NFPA 70E, arc-rated clothing is only designed to protect against thermal energy. The other effects of the blast are entirely unpredictable. In this case, the force of the blast was strong enough to blow up/off the employee’s 40-cal hood. SCE&G F/H took the opportunity to modify the electrical safety program to require the use of a balaclava under a hood, which could have prevented this employee from receiving any burns at all from this catastrophic event, even though this PPE requirement goes above and beyond consensus standards requirements.

Another action that was turned into procedure following the event was to instruct all employees to take and hold a deep breath before conducting an electrical operation that could possibly lead to an arc flash event, such as operating or racking a breaker. Although completely engulfed within an arc blast between two sets of switchgear, this employee suffered no respiratory damage following the arc flash event. He had been taught to hold his breath as part of his safety training, so an instinctive gasp at the onset of the event was therefore avoided.

Summary
Instead of resisting change, SCE&G F/H employees embraced the process of revising the company’s electrical safety program, especially several from operations who were strong proponents. Their input has made the program undeniably stronger. This, along with management’s commitment to operational improvements, including remote racking and increased dedication to arc flash mitigation strategies, is significantly increasing the safety of SCE&G F/H’s employees.

About the Authors: Randy Fabry is the training manager for the fossil/hydro generation business unit of South Carolina Electric & Gas. He has more than 30 years of power generation experience at fossil and nuclear facilities, with more than half of that time spent in training roles. Prior to working for SCE&G, Randy served as a reactor operator aboard a nuclear fast attack submarine.

Pam Tompkins, CSP, CUSP, is president and CEO of SET Solutions and a 34-year veteran of the electric utility industry. She is a founding member of the Utility Safety & Ops Leadership Network and presently serves as the executive board’s education chairwoman. As a member of IEEE and ASSE, Pam has authored and presented technical papers on high-voltage electrical safety issues at IEEE workshops and national ASSE conferences. She is an OSHA-authorized instructor who specializes in helping small- to medium-sized electric utilities in the U.S. and abroad comply with today’s safety and training requirements.