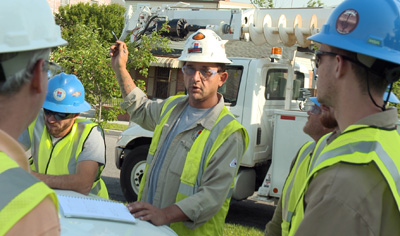 On your way to work today, how many dashed lines in the middle of the road did you pass? What ornaments decorate your dentist’s office? How many people wearing glasses did you see last month?

If you’re like most people, you don’t know the answers to these questions, and that’s a good thing. In his book “The Organized Mind: Thinking Straight in the Age of Information Overload,” author Daniel J. Levitin states that the processing capacity of the conscious mind is estimated to be about 120 bits per second, barely enough to listen to two people talking to you at the same time, yet in our waking lives most of us are exposed to more than 11 million bits of information per second, according to Leonard Mlodinow’s “Subliminal: How Your Unconscious Mind Rules Your Behavior.” Without what psychologists call an attentional filter, we’d be able to recall the minutiae around us, but left without the mental capacity to draw reasonable conclusions about what we perceive, and therefore left without the ability to lead normal lives.

The problem with an attentional filter, however, is that it occurs on the subconscious level. Our brains decide what we notice without any conscious input from us. Of course, we can always force ourselves to notice small details by applying mental resources to count and memorize them, but that only happens with concerted effort.

In a utility setting, our attentional filter can create a conflict between what we do perceive and what we should perceive. Fortunately, the utility industry has an effective solution to our cognitive limitations: the job brief.

The job brief requires utility crews to discuss hazards, energy source controls, personal protective equipment, work procedures and special precautions. By doing so, it helps us overcome some of our weaknesses. The essential function of a job brief, one can argue, is to allow crew members to:
• Identify what must be brought forward from the subconscious and remembered.
• Resolve conflicting expectations and arrive at one set of behaviors everyone will follow.
• Turn the acts of hazard identification, controlling energy sources and the rest into habits.

Noticing and Remembering
What we notice is filtered, but that’s only part of the equation, because even if we notice something we still have to remember it, and – as Christopher Chabris and Daniel Simons point out in “The Invisible Gorilla: How Our Intuitions Deceive Us” – recent research suggests most of us have a gap between what we think we remember and what we actually remember. Our memories do not work like cameras or movie reels. Memories can be influenced by suggestion, by the context in which a memory is recalled and by new information learned long after the formation of the original memory. With the demands of modern utility safety, the quality of our memories is sometimes insufficient.

To appreciate the frailty of human memory, it helps to understand an emerging consensus among psychologists that holds that human thinking occurs on two levels. One level operates quickly and automatically, with little to no effort and no sense of voluntary control; in his book “Thinking, Fast and Slow,” psychologist Daniel Kahneman labels this our System 1. This system is what we use when a deer runs in front of our vehicle. There is no time to consider, so we react, drawing on past experience, assumptions and beliefs to select a response in a very short amount of time.

The other level, which Kahneman calls our System 2, allocates attention to the mental activities that demand it, like a complicated math problem. System 2, according to Kahneman, is what we associate with conscious decision-making, concentration and the ability to reason.

In general, both types of thinking serve us well, but both have imperfections. System 1 is vulnerable to errors that stem from conflicting expectations (see “Exercise 1: Understanding Conflicting Expectations,” below). System 2 is prone to inattentional blindness – also known as perceptual blindness – which is a person’s failure to notice something in plain sight because his or her attention was focused elsewhere (see “Exercise 2: Creating Inattentional Blindness,” below).

A good job brief addresses these issues of memory, conflicting expectations and inattentional blindness. Using a form to guide the conversation keeps important items from being missed, and discussing the same categories daily generates easy recall about their elements. During a good job brief, crew members discuss risk issues and address the differences that exist between a worker’s perceptions and the actual reality of task-related hazards due to distractions, lack of experience or lack of training. The conversation helps to prevent errors that can be committed when an individual assumes the task at hand is routine and ordinary. When the risk of inattentional blindness is high, precautions can be agreed upon to avoid it; for example, during a wire pull it may be prudent to assign one person to watch everything except the line, expanding what the group as a whole has in its sights.

First, lineworkers must prepare for the full range of reasonably possible on-the-job occurrences, including both what they expect to happen and what they do not expect to happen. There certainly are lines to be drawn – few would expect crew members to prepare for a meteor strike, for example – but during job briefs crews must match their expectations to the realities they face, and those include infrequent occurrences. Cars don’t veer into work zones often, but sometimes they do, so crew members must prepare for the possibility.

Second, the job brief must resolve big-picture conflicts in expectations. When crew members allow themselves to be subjected to competing expectations, they must understand that if something goes wrong, the set of expectations they did not follow can be used against them. For instance, if a supervisor directs them to skip setting up a work zone to save time, but the utility’s rules require a work zone, the crew members could be confronted for taking too much time if they do set up a work zone, or for failing to follow company guidelines if they do not. Ideally there is one expectation, one behavior and no conflicts that lead to error.

Habits
In “The Power of Habit: Why We Do What We Do in Life and Business,” author Charles Duhigg explains how neurobiologists define a habit. In terms of what occurs in the human brain, a habit is a three-step loop: cue, routine and reward. Over time, this loop becomes more and more automatic, an advantage because it means we do not have to relearn the behavior every time we need it. In addition, once a habit is fully formed, the cue and reward become intertwined, creating a powerful sense of anticipation and craving.

In a general sense, this biological process serves us well. We rely on our System 2 to learn something new, but once a new routine is established as a habit, it slips into the domain of our System 1 and all we have to do is follow along. Done right, good habits become easy to maintain.

Companies and leaders who recognize the influence of habits take pains to allow good ones to develop. In “The Power of Habit,” Duhigg points to former Alcoa CEO Paul O’Neill, Starbucks and Tony Dungy, once head coach of the Tampa Bay Buccaneers, as examples. O’Neill focused on safety as an institutional habit because he believed that excellence in safety would filter down to excellence in Alcoa’s production, quality control and cost control. Starbucks focused on habits stemming from unpleasant in-store situations because the company’s management believed customer satisfaction would soar once employees became adept at handling the unexpected. Dungy developed habits in his defensive players that reduced their decision-making time by a fraction of a second, and by doing so helped turn a doormat franchise into a Super Bowl contender.

In a utility setting, a focus on converting the elements of an outstanding job brief into habits may lead us to new levels of safety in our industry. If we can develop cravings within our employees to mitigate hazards, resolve conflicts of expectation and prepare for unintended occurrences, we will have ingrained in their very biology the desire to pursue safety to the furthest extent possible.

Conclusion
Over the last 20 years or so, utility job briefs have come a long way. Although OSHA still does not require them to be documented, most utilities consider documentation a best practice and do so to establish a written record that job briefings have been conducted. Many utilities invest significant resources into job brief training, into reviewing and tracking job briefs, and into demonstrating links between poor job briefs and undesired incidents.

At the same time, utility job briefs are still maturing. For many companies, job briefs done by employees address only a fraction of the hazards and conflicts they could address, leaving workers exposed to errors that a simple conversation might prevent. Not only that, but too many utility workers see the job brief as unnecessary busywork completed to limit somebody else’s legal liability when things go wrong.

Nothing could be further from the truth. Job briefs help utility workers overcome attention limitations that are hardwired into all of us. They afford us the opportunity to recognize when error-likely conditions are upon us and give us a chance to resolve conflicting expectations and avoid inattentional blindness. Above all, they may be a keystone habit we can alter to induce an exponential leap in utility safety.

About the Author: Michael Burnham, CSP, CUSP, is safety director at Riggs Distler & Co., an electrical, mechanical and utility contractor based in Cherry Hill, N.J.

Exercise 1: Understanding Conflicting Expectations
In a gathering of 10 or more people, tell the group you’re going to ask them seven questions to which everyone knows the answers; in reality you will only ask four questions, but you will keep the group from catching on to what is happening by telling them you’re going to ask seven. Instruct the group to yell their answers as fast and as loud as they can. Then ask, in rapid succession:

• What kind of tree grows from an acorn?
• What rises from the lit end of a cigarette?
• What company is Pepsi’s main competitor?
• What are the whites of an egg called?

Inevitably, someone in the room will answer “oak, smoke, Coke and yolk,” even though everyone knows yolks are yellow, not white. This human error occurs because you introduced a competing expectation that an individual’s System 1, with its need for speed, will trip over a percentage of the time. If you ask someone only what the whites of an egg are called, they are unlikely to answer “yolk.” But when you first ask three questions whose answers are oak, smoke and Coke, the brain starts to sense that the correct answer to the egg-white question rhymes with “oak” and sometimes makes the associative leap to “yolk” (for more information, pick up a copy of James Reason’s “Human Error”).

If you wish to create human error, allowing expectations to conflict is an easy way to do so.

Exercise 2: Creating Inattentional Blindness
To create inattentional blindness, try this exercise from Daniel Kahneman’s “Thinking, Fast and Slow.” Take 60 index cards and write a different four-digit number on each card. Set a metronome to 60 beats per minute and turn it on, so it clicks once per second. Ask a volunteer to turn over one card per second and to add one to each of the digits shown. For example, the volunteer would see 4617 on the card, but would say 5728; 9350 would become 0461; 6872 would become 7983; and so on.

This is a difficult System 2 task. While your volunteer is conducting it, he or she will often fail to notice unusual things that gradually move into or out of his or her normal field of vision. An example can be seen in this selective attention video from Christopher Chabris and Daniel Simons: www.youtube.com/watch?v=vJG698U2Mvo.