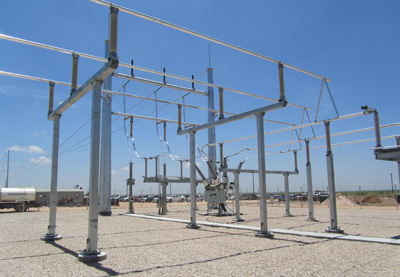 Years ago, a rare event happened in the service area of the company I was working for at the time. Sea fog had rolled in and blanketed most of the system along the coastline where the generation was located. It contaminated the insulators and tripped major circuits everywhere. All of the substation and line crews worked hard to clean the insulators and get the system restored. It took a full day to get the system back to normal, during which all of us learned a great deal about insulation. One crew in particular will probably always remember that day. While they were getting ready to switch out a section of 230-kV bus in a substation, electricity tracked down the insulator right above their heads. Fortunately, no one was injured, but there was a lot of high stepping and gravel flying.

Nearly everyone reading this has worked with insulators of various sizes and shapes. For me, it was in substations. You learn to trust the equipment with your life. What prompted this article was a website discussion I read about best practices for maintaining and cleaning insulators and bushings for testing. There were some interesting suggestions. The question is, how do we know where to get the correct information to help us in our work? Safety is our primary guide. Our second guide should be manufacturer guidelines. In the early years of our industry, we were instructed to “go do it” and not given much direction or specifics about how to perform the tasks we were assigned. So, we used a variety of methods and materials to clean and install insulators. Some were good, others not so much. But today we have the world at our fingertips: websites, phone numbers and access to almost any kind of information from a variety of sources. The problem remains, however – we must know how to determine if we have and are using the correct information.

The data that I acquired for this article was provided by manufacturers, considered by OSHA to be industry experts. Specifically, the two manufacturers I interviewed are the largest producers of insulators in the world. Their engineering managers were a wealth of information and willingly shared their knowledge. Our topics of discussion included basic construction, maintenance, handling and safety of insulators.

Basic Construction
There are two important insulator-related questions that I encourage new apprentices to ask before starting work or changing a process. First, what is the insulator’s design feature? And second, what are its limitations? Answering these two simple questions can keep you from getting yourself into a bad situation.

Determining the design feature of an insulator is simple. It is built to support, suspend or rotate (switch) electrical equipment or conductors and prevent electricity from contacting ground/earth. This can be a power line, substation bus, switch or bushing for transformers or circuit breakers.

Limitations are determined by the manufacturer. For instance, how much weight will an insulator withstand? Here are examples of the limitations of an average porcelain two-unit station-post insulator that is 80 inches tall. It is built to withstand the following:

Based on its design, this unit will take a lot of stress from being pushed, pulled and twisted, but it will not tolerate much side or lateral load. This is important safety information to know when assembling, disassembling or lifting.

Maintenance, Handling and Safety
Manufacturers usually include information about insulators when they are shipped or purchased. If they don’t, the information is likely to be easily accessible via the internet. The question is, how many field personnel take the time to read it in this fast-paced world we live in?

Here are some requirements and suggestions from the manufacturers I spoke with that may help you the next time you work with insulators on the job.

Contamination
Dust, salt, numerous chemicals, petroleum particulates, biologicals (mold in some cases) and flashovers all contribute to the contamination of the metal, porcelain and polymer surfaces of insulators. Routine cleaning helps to promote reliability and longevity. The manufacturers I talked to recommended that insulators be cleaned either by using pressure-washing equipment or washing them with mild soap to remove any residue. Both manufacturers stressed that users should avoid chemicals that may damage the polymer or glazed (porcelain) surfaces, and that they should wipe down polymer with a soft, lint-free cloth.

There are two pressure-washing caveats to be aware of:

Note: A few newer insulators are designed to be lower maintenance. They are made with a surface material that helps to reduce contamination buildup and maintenance.

Handling
Care should be used when handling polymer insulators, which have a hydrophobic surface. The sheds (skirts) of these insulators are vulnerable to damage by various objects, including knives and nails as well as chemicals, oils and petroleum products. The manufacturers I spoke with strongly suggested that insulators should not be stacked or secured with straps across the polymer portion; doing so will damage the surface of the polymer, so it’s best to use shipping crates instead. The insulators must be transported with the ends supported. Never let those ends bend more than 30 degrees. In addition, do not lift, step on or climb on sheds/skirts. The bottom line is that polymer surfaces are vulnerable.

Porcelain should be checked for cracks, broken sheds/skirts and damage to the metal-to-porcelain mating surfaces. When lifting and installing porcelain insulators, use eyebolts attached to terminal-end hardware to hoist them to the vertical position. Assemble and torque each insulator to the correct specifications for the available bolt sizes. Do not use slings that are choked/wrapped to the porcelain. When removing insulators from the structure, do not remove multistack units as a single unit. Separate them and lower each unit separately. This is for safety reasons; porcelain does not take side-loading very well. When working on porcelain bushings (transformers, circuit breakers), do not stand on the insulators as this can damage the surface of the bushings. In addition, do not climb bushings or belt off to them. If a fall occurs, the shed/skirt of the bushing may break and cut the safety strap, causing you to hit the ground.

Heat
Insulators do not do well with extreme heat, such as a flashover or a hot spot on a connection. Porcelain insulators that experience heat in the 150-degree-Fahrenheit range over extended periods will sustain damage to the cement that connects the metal-to-porcelain end pieces. At 200 degrees Fahrenheit, the cement will dehydrate. This typically appears as a black, tar-like substance oozing out of the metal-to-porcelain mating surface.

Porcelain may be cracked or broken due to thermal shock caused by a flashover. If porcelain does have damage, it should be replaced because cracks on the shed/skirt may extend to the core and lead to a reduction in mechanical strength. I asked the two manufacturers about using insulating paint, and both replied that it would not be the same. The paint is unlikely to have a similar ability to deflect surface contaminants and water, and another flashover is likely to occur. The manufacturers stated that newer insulators (i.e., those built since 1970) are constructed of nonporous porcelain. Porcelain older than that is not constructed the same way and should be inspected more often or changed out.

Safety
Hazards associated with porcelain insulators include cuts from broken glass, squashed/smashed body parts and muscle strain. In the case of transformers and circuit breakers, the porcelain bushings may become a glass grenade under fault conditions. If contaminated, cracked or broken in an energized condition, a flashover may be another hazard. Recent service experience also suggests that special attention is needed in very cold weather conditions because even moderately contaminated insulators may flash over under normal service voltage when ice reaches its melting point.

There are a fair number of insulator-related regulations and standards. On the transmission side, the Federal Energy Regulatory Commission and the North American Electric Reliability Corp. now have language on reducing outages by cleaning insulators. IEEE 957 is a consensus standard for cleaning insulators. The National Electrical Manufacturers Association and the InterNational Electrical Testing Association offer guidelines for insulation testing using various test equipment.

Conclusion
Insulators are a critical part of our electrical system. They typically are ignored because it takes a long time for contaminants to build up on them or for something to go wrong. Manufacturer requirements and industry best practices will help to sustain the integrity of the electrical system. Inspect insulators regularly for contaminants and damage. Clean and test when possible. And remember, in the electrical world, trust nothing and verify everything.

About the Author: R. Scott Young, CUSP, is the owner of the Industrial Safety Institute, which specializes in technical training for substations as well as OSHA compliance training. He has worked in the electric utility industry for 40 years and has extensive experience in substation operation, maintenance, construction and testing. Young also is a certified substation and circuit-breaker technician who has developed several substation-related technical and safety training programs. Contact him at info@industrialsafetyinstitute.com.