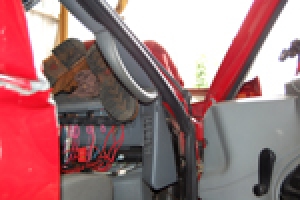 Seat belt use – or the lack of seat belt use – continues to be an issue on the road and on our job sites. It is obvious that some of our employees and even some of our supervisors don’t get it. Seat belt use is a mandatory Department of Transportation safety rule and it does not matter whether the truck is used on a roadway or right-of-way. OSHA 1926.601, which covers vehicles that operate within an off-highway job site, requires seat belts. If the legal argument is not convincing, maybe statistics will be. Not coincidentally, states with the highest crash fatality rates also rate low in seat belt use.

Low frequency of seat belt use and high fatality rates are clearly related. Vehicles that turn over almost always result in an ejection, and the people ejected are killed about 90 percent of the time, most often crushed by the vehicle they were ejected from. You see headlines in the news every week: “Ejected driver killed in crash.” The news articles usually end with something to the effect of “neither occupant was wearing a seat belt.” Don’t read or watch the news? Ask any police officer about seat belts and wrecks. They will tell you that seat belts save lives.

People who are not belted in during emergency conditions are more likely to lose control of a vehicle. The force imposed on an unbelted vehicle operator in an out-of-control vehicle is measured in thousands of pounds, and even higher in rough off-road terrain. Trucks and other high-center vehicles pitch more dramatically during crash maneuvers. Vehicle engineering studies show that unrestrained drivers subject to high-gravity forces in crash maneuvers lose control more often. Hard cornering and braking in emergency maneuvers produce g-forces on an unrestrained driver that interfere with driver control inputs. This makes the vehicle more difficult to control, resulting in more violent crashes.

Since 1940, vehicle cabs have been increasingly designed to provide a survivable space in the event of front and side impacts and rollover collisions. Few crashes in modern automobiles result in collapse of that survivable space. However, if the occupant is not belted in, he does not remain in that protective space.

There simply is no legitimate argument for not using seat belts. It takes more effort to get into a vehicle than it does to put on a seat belt. Considering that every vehicle you enter has the energy to kill you in a violent manner many times over, it seems counterintuitive not to belt in and prevent your possible death.

Raise your seat belt IQ: Be smart, do the right thing, use seat belts.

About the Author: After 25 years as a transmission distribution lineman and foreman, Jim Vaughn has devoted the last 15 years to safety and training. A noted author, trainer and lecturer, he is director of safety for Dillard Smith Construction Company in Chattanooga, Tenn. He can be reached at 423-321-2105 or jvaughn@dillardsmith.com.

After 25 years as a transmission-distribution lineman and foreman, Jim Vaughn, CUSP, has devoted the last 20 years to safety and training. A noted author, trainer and lecturer, he is a senior consultant for the Institute for Safety in Powerline Construction. He can be reached at jim@ispconline.com.
Current Equipment Operations Featured Frontline Fundamentals grounding Leadership Development Management Toolbox Osha Articles ppe Q & A Safety Management Tailgate Topics Train the Trainer 101 underground Voice of Experience Worksite Safety