Train the Trainer 101: Back to Basics: ‘Gentlemen, This is a Football’

I recently spent several weeks studying an incident, trying to understand how it had happened and – more importantly – how it could have been prevented. Maybe the answer was associated with human performance, or maybe culture, or it could have been procedures, or … well, maybe it could have been associated with any number of things. In other words, even with all of my experience and training, I had a hard time finding the singular root cause. This dilemma made me recall a question I missed on an engineer-in-training exam I took in the 1970s. The question had ladder diagrams and loop schematics and required me to determine why indicator light I-107 was off. After a long study of the supporting documents and employing all of my superior intellect, I proudly answered the question 100 miles off. Why? The correct answer was, “The lamp was burned out”; this is probably why I never became an engineer.

The memory of the exam question, in combination with the incident review I struggled with, became the impetus for this issue’s “Train the Trainer 101.” As it turns out, the root cause solution was not high-minded, technical or complicated. And in fact, there was no singular solution; the remediation and prevention were multifaceted, but they were not arrived at by sophisticated application of technical expertise. Instead, the answers were as basic as Vince Lombardi’s approach on opening day of preseason training. It didn’t matter how long you had played football for Lombardi, or even how long you had played the game. Preseason training always began with the same speech: “Gentlemen, this is a football.” Sometimes we just need to take a breath and get back to basics.

A Common Question
How do we accomplish that? It’s a question that employers commonly ask when reviewing OSHA rules. And that is exactly the problem – trying to follow an OSHA rule is often the wrong approach. OSHA training guidelines used to claim that OSHA rules were performance-based, which is not a very good label for “outcome-based” or what you were supposed to accomplish. At least that is how they started. OSHA doesn’t tell us what tools to use or what equipment is required. As I have often said, OSHA has specs for guardrails and includes minimum lumber or steel pipe sizes to help the employer comply with the intent of the standard. But the fact is that you can build your guardrails out of vermicelli and rubber bands as long as they will meet the weight and performance requirements.

If you go to OSHA’s Workers page (www.osha.gov/workers/index.html), you will notice OSHA now states that standards are “rules that describe the methods that employers must use to protect their employees from hazards.” Some rules are outcome-based with no specifically required acts; others do require certain acts that the employer must ensure are performed. The trick is knowing the difference between the two. A colleague and I were once tending to an issue he had and he asked, “How am I supposed to do that?” My answer was, “Well, that’s the wrong question.” The question you should ask is, what is the intent of the rule or what is OSHA trying to accomplish?

Each OSHA rule is intended to prevent injury from a particular exposure. When you understand the intent, your options open up – sometimes dramatically. Here is a contemporary example: OSHA 29 CFR 1910.269(l)(12)(i) requires that the “employer shall ensure that devices used by employees to open circuits under load conditions are designed to interrupt the current involved.” So that means you can’t break load with a hot-line clamp or a non-load-break dropout, right? Many utilities have made dramatic changes to procedures over this rule. I know one that spent two years installing load-break dropouts on every jumper-supplied radial so they could isolate and be in compliance. To meet the requirements of the rule, you have to use a load-break or install a load-break mechanical jumper, remove the hot-line clamp and open the load-break jumper. But what is the purpose of the rule? Is OSHA trying to protect pole tops, prevent unplanned outages or protect the employee? What if the employee was in such a position and at such a distance that, when he lifted the hot-line clamp, a 20-inch load arc slapped the pole top? If the employee was embarrassed and the circuit was relayed, but the employee was not hurt, would that be a violation? Probably not, which is the conclusion OSHA came to in 1997 (see www.osha.gov/pls/oshaweb/owadisp.show_document?p_table=INTERPRETATIONS&p_id=22347). At that time, OSHA stated that if the employee was not at risk, the employer would not be cited for violation of the rule. This is a perfect example of intent of a rule, although OSHA may not answer the question the same way today. If you take a look at that 1997 rule interpretation, you will find a notice that the interpretation may no longer represent OSHA policy, although the notice does not specify which parts of the interpretation have changed, if any. Obviously, not every hot-line clamp load-break has the same issues or risks. OSHA’s answer was not about lifting hot-line clamps or breaking load with a dropout; it was about protecting employees.

The point of all this is that not every written rule has a blanket application to every similar situation, just as every interpretation does not apply to every similar scenario. Safety professionals have to learn to read with understanding, recognizing intent and interpreting the rules relative to a word that is used more and more often: feasibility.

Conditions of Infeasibility
Let’s examine a couple other OSHA interpretations from a December 1997 letter written to Dimitrios S. Mihou of Niagara Mohawk Power Corp. (see www.osha.gov/pls/oshaweb/owadisp.show_document?p_table=INTERPRETATIONS&p_id=22508). Mihou had asked if Niagara’s proposed solutions to some difficult fall protection scenarios the company faced were acceptable. OSHA replied by stating, “A fall protection system anchor point at the level of an employee’s feet may not be acceptable.” Read that again. OSHA did not say it was a violation even though, if you read the standards, you would always try to attach fall protection at the back of and above the employee to an anchorage rated at 5,000 pounds. What if there is nothing above the employee that is rated at 5,000 pounds? In this case there was no feasible means of meeting the regulation’s specified fall protection methodologies. Is it possible to attach at the feet? My company does so under certain conditions of infeasibility. And in 2013 an employee who was dismantling a substation cap bank 20 feet off the ground fell from the top deck. He was anchored at his feet through a retractable with a total deployed length of approximately 18 inches. He did not fall to the ground and was not in any way injured in the event. With a 345-kV circuit overhead and the objective being demolition of the structure from top to bottom, there was no method of rigging conventional fall protection. But that did not mean there was no feasible means of fall protection. During the job hazard assessment, the crew determined they were not going to tie off because there was nothing to hook to. We decided they were going to tie off even if it was to the spread metal or platform brackets, and they did so begrudgingly. Not anymore. Take a look at the photo below; you can see how far the employee fell. Notice that the deceleration device did not even deploy, indicating how low the arrest forces were. 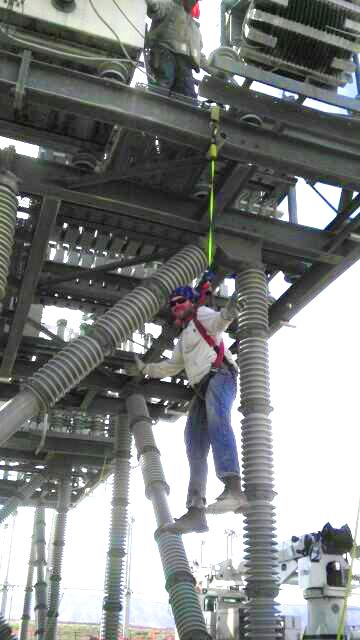 In the same letter of interpretation to Niagara Mohawk Power, OSHA replied to a question about whether or not workers can be tied off to a hook suspended over a substation transformer. Read the answer carefully: “The hook of a crane does not meet the definition of an anchorage, that is, a secure point of attachment for a lifeline, lanyard or deceleration device.”

Does OSHA’s answer state that you cannot use it if it is the only feasible means of a fall protection anchorage? No, but using a crane hook has issues and should be an alternative when there are no other feasible means. By the way, on substation transformers, your fall protection plan should begin with preventing falls as opposed to arresting them. Arrest off the side of a transformer slams you into bolts, hooks, flanges and gauges. It will hurt, it may poke holes in your head and it may even do more damage than a 10-foot fall. Plan on preventing the fall, not arresting it.

Identify the Basics
Getting back to the root cause quest mentioned in the beginning of the article, no one was seriously injured in the incident, which does not need to be described in detail. Essentially, a qualified operator initiated an event that relayed a 115-kV transmission circuit. Two men were assigned to perform a final tightening of structure foundation bolts, a 20-minute task that was mechanical, was on the ground, required two hand tools, was not in an energized environment, although there was a nearby energized line, and was well within their training and capabilities. The men were both described in interviews as highly motivated, very qualified, good at their jobs, dependable and appropriately skilled – or perhaps even above skill level – for their classifications. Both were also electrically qualified and had demonstrated electrical qualification to us, their employer. Ultimately, because of a likely combination of initiative, rushing and some undisciplined motivation, they ended up with a boom in the phase. Everybody on the investigation team knows what happened, but even the ones who were there can’t figure out how the situation evolved from tightening a bolt to locking out a transmission line.

Everyone knows of a case in which someone did something unexpected with unfortunate results. The question is, how do you prevent these cases from happening? Usually the response is to focus on company culture, and that is true. So how do you maintain a culture of safety in such a way that effectively prevents injury events? Let’s begin with human performance. In the incident mentioned in the previous paragraph, it’s obvious there was a quantifiable human performance error in the boom contact, but on whose part? Safety has to be practicable and formulated to achieve one outcome: preventing undesired events by identifying hazards and remediating risks. In other words, it’s about identifying a basic goal with a basic approach. Regulations and standards play an important part in guiding the safety professional toward good policies, but safety is not about trying to dissect OSHA and create work rules to comply with those regulations and standards.

Now, don’t throw out all the work you have done, but perhaps take a fresh look at what you are doing, how you are training workers and what you are trying to accomplish. “Ladies and gentlemen, this is a football …”

About the Author: After 25 years as a transmission-distribution lineman and foreman, Jim Vaughn has devoted the last 16 years to safety and training. A noted author, trainer and lecturer, he is director of safety for Atkinson Power. He can be reached at jim.vaughn@atkn.com.