You have read and heard about all of the related standards for arc flash protection and you still don’t have a program or even a plan for a program, right? In this installment of “Train the Trainer 101,” I will sift through the rules so you can begin a practical approach to creating an effective and compliant program. Obviously, we want to protect employees and well-developed programs accomplish that, but this article primarily focuses on the administrative side of compliance.

The Basics
Arc flash is a recognized hazard and as an employer, you must evaluate the risk and respond accordingly to limit the exposure of your employees. In other words, you have to have a program of analysis, identified risks, remediation and training.

Although there are a lot of consensus standards out there, let’s begin with the rules every safety manager should look at first: the OSHA regulatory standards. The current standard is simple. 29 CFR 1910.269(l)(6)(ii) requires the employer to train employees exposed to flames or electrical arcs about the hazards involved and (l)(6)(iii) states that employees cannot wear clothing that could increase the extent of injury sustained by an employee exposed to arcs. That rule also lists prohibited clothing made from acetate, nylon, polyester and rayon. For the MSHA-regulated mining industry, 30 CFR 56.15006 is a general requirement for the employer to evaluate environmental hazards and provide protective equipment. That rule is generally interpreted as requiring arc protective clothing for electrical workers exposed to arcs.

The General Duty Clause
The simplicity of the requirements of 1910.269(l) does not stand alone. The employer has a general duty to analyze the workplace for risks, take protective actions, and inform and protect workers from hazards in the work environment. It is well known in the industry that arc flash hazards exist and protective gear is available to prevent or limit injury from arc flash. For these reasons, if you have an agency investigation of an incident, you will be cited if you don’t have an arc flash protection program, either by OSHA under the General Duty Clause or by MSHA under general protective equipment rule 56.15006.

The two most-cited consensus standards dealing with arc flash protection are ANSI C2, the National Electrical Safety Code, and NFPA 70E, the standard for electrical safety in the workplace. As a safety manager, you should have and be familiar with the safety sections of these standards; both have good information on arc protective systems. The consensus standards themselves could be used administratively under civil challenges or as general duty citations and yet, as discussed above, neither of them is listed as an OSHA adopted standard in 29 CFR 1926.6 or 1910.6.

New Rules
On June 15, 2005, OSHA published “29 CFR Parts 1910 and 1926: Electric Power Generation, Transmission, and Distribution; Electrical Protective Equipment; Proposed Rule.” This proposed rule unifies the differences between 1926 and 1910.269 and adds significantly to the regulations on electric arc protection for employees. The final rule will be published any day now as we at iP have been saying for years. In any case, the document mentioned above tells us what to expect when the rule becomes final. As you read the following, you will see in parentheses “FR” followed by a five-digit number. These are the page numbers in the document where you can read the entirety of the proposed rule. You can find the rule at www.regulations.gov. In the search box, type “OSHA 2005-0001” and press enter and you will be taken to the document page. Click on the title and you can download a PDF file of the proposed rule.

Expansion of the Apparel Rule (FR34938)
The new rule 1910.269(l)(11)(i) requires the employer to assess the workplace to determine if each employee is exposed to the hazards of electrical arcs. Rule (l)(11)(ii) requires a reasonable estimate of the heat energy and provides an estimation tool – Table 8 in Appendix F – for simplifying the process. In a note to paragraph (l)(11)(ii), OSHA allows the employer to make broad estimates covering multiple system areas provided the employer uses reasonable assumptions about energy exposure.

Rule (l)(11)(v) requires the employer to ensure employees wear clothing with an arc rating equal to or greater than the heat energy estimated in paragraph (l)(11)(ii). This would appear to mean prevention of all thermal burn to an exposed employee, but the expectation of the standard is further explained in the appendices as preventing a second-degree burn (FR34942) in line with the NFPA 70E standard.

Appendix F (FR34940)
Unlike many OSHA appendices, the introduction to Appendix F lacks the nonmandatory declaration, but does refer to the appendix as information to help the employer meet the requirements of (l)(11). Stick work has the same exposure risk as gloving and in some conditions may even be a greater risk. Workers using hot-stick methods do not usually wear rubber gloves and sleeves that have proven indispensable in arc flash incidents. The guidance in Appendix F for estimating arc energy exposure specifically addresses the distance calculation as the minimum approach on the stick minus twice the minimum arc length as a reasonable estimate of distance to be used for calculating heat energy exposure.

The appendix includes Table 8: Available Heat Energy for Various Fault Currents, Clearing Times, and Voltages of 4.0 to 46.0 kV (FR34941) regarding phase-to-ground exposures, but refers employers to NFPA 70E tables 130.7(C)(9)(a), (C)(10) and (C)(11) for exposures not provided in Table 8. Those NFPA tables include lower voltage, phase-to-phase and enclosed arc exposures. Table 8 is shown here for reference, but readers are cautioned that the final rule table may be different than the table shown here. 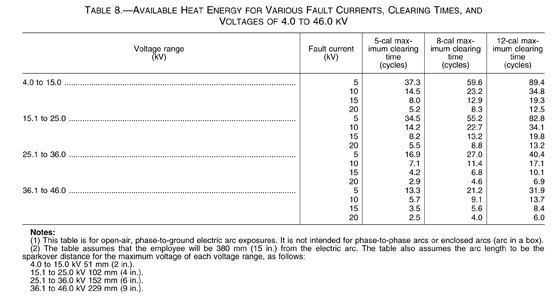 Ultimately, the final rule may be slightly different than the proposed rule discussed here, but the responsibility will remain the same. The employer must evaluate the workplace; estimate the exposure; provide methods, tools or clothing to protect the employee; and train the employee in the program requirements and protective methods adopted.

About the Author: After 25 years as a transmission distribution lineman and foreman, Jim Vaughn has devoted the last 15 years to safety and training. A noted author, trainer and lecturer, he is director of safety for Atkinson Power. He can be reached at jim.vaughn@atkn.com.