Written by Bruce Elfstrom on February 15, 2011. Posted in Safety Management. 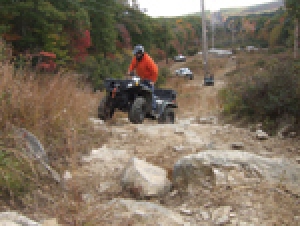 Nobody likes getting stuck in mud, rock, sand, snow or anything for that matter. As a company that maintains more than 1,600 miles of transmission lines in all kinds of terrain, Northeast Utilities (NU) understands this fact all too well. Environmentally it can be a nightmare, logistically it can affect job completion estimates and from a safety perspective it can put employees in harm’s way.

It was these reasons, along with a proactive approach to safety, which led NU to invest part of its safety budget into a 4×4 training and recovery techniques program for its transmission line crews and arborists. The results have been tangible. In 2010, 75 percent of the cost of training was offset by a reduction in stranded vehicle recovery and repair costs, while more than 550,000 miles were traveled without a preventable motor vehicle accident.

NU first reached out to Overland Experts (OEX) in early 2009. After a thorough needs assessment, it was determined that the best approach would be three-day courses consisting of six to 12 students. The main objectives were improved 4×4 operation, mastery of simple and complex recovery techniques, environmental stewardship and a constant emphasis on safety. Satisfying these goals would help to make a more productive and cost-effective work force.

Curriculum Design
A curriculum was developed based on the experience level of the attendees, the needs of NU, and considerations for the vehicle fleet consisting mainly of Ford F150, F250 and F350 trucks. In addition, the training was devised to focus on limiting the environmental impact of NU’s daily activities and increase overall environmental awareness.

An hour-long lecture on four-wheel drive systems kicked off day one of the program and comprised the only time spent in the classroom. Right from the start a step-by-step linear and methodical approach was used to get drivers to think before they drive. They learned that through repetition this method will become second nature; a skill set just like mental muscle memory. After the lecture, attendees thoroughly examined trucks, including transfer cases, suspension types, tires and gross vehicle weights, identifying all vulnerable spots as well as recovery points that could be used. The afternoon of day one was spent learning techniques for handling varying terrain, including how to safely navigate up and down hills, ditches and moderate rock.

Day two’s focus was on recovering stuck vehicles. “Driving is really only half the battle out there on the trails,” said instructor Kevin Lacz. “If you don’t know how to safely and creatively extricate a stuck vehicle, then you are crippled as a driver when the going gets rough. Recovery is not something you do after you failed to drive an obstacle; it’s done beforehand, in your head. It’s part of the plan you make.”

The group first learned the outline for performing any vehicle recovery. Initially, the vehicle being recovered must be fully stabilized and all participants must have on adequate safety gear, including gloves and hard hats where applicable. Second, a full assessment must be done to determine why the vehicle is actually stuck. For instance, you can’t hook up a winch line if a rock under the fuel tank is actually the hang-up.

After performing a full assessment, groups were taught to choose between three methods of recovery: kinetic rope, winch and Hi-Lift Jack. Next, the focus was on executing that choice with a chain of command.

According to trainer Dave Herrle, it’s the “none of us is as dumb as all of us are” scenario. Usually, he explained further, “the more people trying to lead, the less gets done while at the same time causing a dangerous and confusing situation.” Lastly, the group learned the importance of continued reassessment during all recovery scenarios. All uncontrolled movements, noises, or safety concerns require stopping everything and re-evaluating.

After learning the theory behind recovery, OEX staff set up numerous stuck vehicles and worked with the group to formulate proper extrication plans. Hi-Lift Jacks were used in high-center situations, such as a vehicle that gets hung up while crossing a log or rock. Kinetic ropes were used to quickly extricate vehicles stuck in mud and sand, while winches were taught on the hill section.

Day two’s morning recovery section proved useful in the afternoon as the group began navigating more challenging terrain. “One of the benefits to training with OEX is that they operate on closed courses with purpose-built trails,” said Eriks Surmanis, manager of transmission line construction and maintenance crews at NU. “They can teach the technique and then allow for repetition mastery in a safe, predictable environment. Everything was taught in a direct fashion and then our team members were allowed to execute, often running into recovery scenarios that they had already been prepared for in the morning session.”

OEX spent day three with the groups on their own transmission lines running through rural Connecticut. Having consulted with NU, OEX was aware that environmental issues, especially in wetland areas, were at the forefront of concerns. For example, the teams were shown that reducing the air pressure in tires would reduce environmental impact by decreasing the likelihood of wheel spin, which can lead to erosion. Additionally, they were taught preventive measures for preserving the environment, such as using bridging ladders before entering wetland areas.

Working with Nature
Surmanis, who participated in one of the first OEX classes, said, “The fundamental core of this training program is that all driving activities are carried out at slow speeds and with the lightest possible footprint, meaning that we operate with respect for the driving surfaces that we must cross to carry out our job responsibilities. Bruce Elfström is a biologist and it shows. One of his mantras is, ‘What’s good for the environment is good 4×4 technique. Good driving works with nature, not against it.’”

One thing that became increasingly clear throughout the course was that NU teams did not have all of the right equipment to use if and when they got stuck. To address this need, OEX worked directly with NU’s safety department to design and procure a standardized recovery kit for their vehicles which included Hi-Lift Jacks, chains, shackles, straps and portable air compressors, all of which were in short supply on the trucks that were sent to OEX for the initial class.

In an ongoing effort to merge the training NU received with its current operating procedures, 14 of the department’s vehicles were supplied with the proper recovery gear by OEX. This has ensured continuity between the training the teams receive and their ability to implement those techniques in the field. OEX has also consulted with NU to upgrade its fleet. As a result, several older F150s have been swapped out with new Jeep Rubicon models which were at a similar price point as the F150s, but with much greater off-road capabilities.

To date, eight groups from NU have been trained by OEX and another six are scheduled in 2011. The reduction in vehicle recovery and repair costs has proven to NU that the training works.

Tony Johnson, who brought seven arborists from NU to the program, summed it up saying, “What you taught was priceless. Without this knowledge I would have been calling for assistance, but instead was able to get out of a recent predicament safely and effectively in less than an hour.”

About the Author: Bruce Elfstrom is the CEO of Overland Experts. The company operates facilities in East Haddam, Conn. and Orange, Va., and offers on-site training anywhere in the contiguous U.S. For more information, visit www.overlandexperts.com.

Editor’s Note: In an effort to service more utility companies, OEX will be holding two open houses for utility professionals during the month of April. For more information, e-mail utilitytraining@overlandexperts.com or call (860) 873-9640.