How Six Sigma Can Improve Your Safety Performance

Six Sigma is the evolution of statistical quality improvement processes that have been used extensively to improve manufacturing and other process-related industries. How good is Six Sigma? It is a statistical measure of variability or standard deviation. The Six Sigma process calculates to 3.4 defects per million opportunities. Needless to say, that is near perfect execution of a process. Although not often used in the safety arena to full potential, Six Sigma tools can help produce significant and sustainable improvements in safety performance, injury reduction and associated pain.

Total Quality Management
To gain an understanding of Six Sigma, it is helpful to have some historical knowledge of the original statistical improvement tools or the Total Quality Management (TQM) concept. Original quality pioneers such as Walter A. Shewhart, W. Edwards Deming and Kaoru Ishikawa worked with Japanese manufacturing companies in the 1950s to significantly improve the quality of products. The original concept, TQM, has been defined as a management philosophy that produces continuous improvement of products and processes.

One of the most powerful tools that came out of TQM is the Plan/Do/Check/Act (PDCA) continuous improvement wheel. In this concept, plan to do something, do it, check for the effectiveness and, if it’s not performing as planned, act upon that by making changes. Then, on an ongoing basis, “turn the wheel” or plan, do, check and act again. This produces continuous improvement. The concept of PDCA is still just as powerful today as it was when first proposed.

A safety application of PDCA at both a strategic and an operational level is shown in the following diagram. 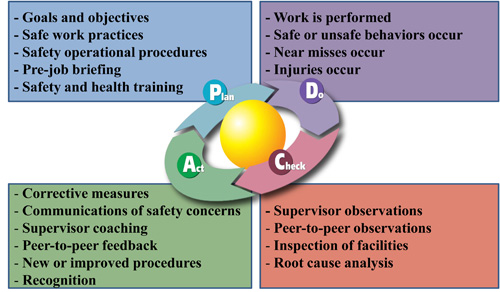 Six Sigma – Quality on Steroids
Although TQM provided significant quality improvement for users, there were still opportunities to improve the concept. That is why Six Sigma came to be. The Six Sigma management concept was originally developed by Motorola USA in 1986. In 1995, Six Sigma became more visible when Jack Welch made it a focus of business strategy at General Electric. Today, the Six Sigma concept has become the standard process for quality improvement in many industries. The objective of Six Sigma is to improve the quality of processes by identifying and removing the causes of defects. In safety, these process defects can be unsafe behaviors, incorrect procedures or equipment failures, all of which can result in injury.

A Formal Improvement Process
The original TQM used a number of statistical tools, but there was no formal process for integrating all of these tools and developing a complete process improvement solution. Six Sigma uses DMAIC, a clearly defined five-step improvement process that consists of the following: 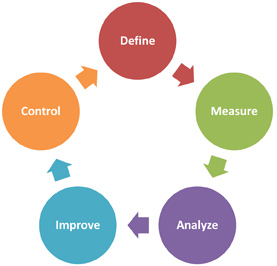 Define Stage – What Are We Working On?
In the Define Stage, clearly identify the scope of the project or what it is that needs work. Also determine what the target performance should be. It will be necessary to understand what process is failing and resulting in what kinds of injuries.

By applying this tool to safety, one can see how some of the suppliers and inputs – which are normally not considered to have an impact on safety – can indeed have impact. For example, the SIPOC tool helps demonstrate that the people who design the project, design the standards or determine the specifications of the materials should consider safety implications when doing design work.

Measure Stage – Is the Data Correct and What is it Telling You?
In this stage, the data being used is extensively assessed and interpreted. First, ensure that the data is valid and accurately measuring the desired subject. This can often be an issue when analyzing behavior observations. Behaviors such as use of safety glasses are easy to document and address. More controversial items, such as adequate cover-up, are not always documented and addressed. As a result, when combining all of the observation data, since some of it is not valid, the overall observation results may not reflect actual performance.

Often in this phase, charts and graphs will provide directional information stating that performance has improved or degraded, but this may be misleading. Many charts and graphs reflect averages, and important information can be lost in averages. There are a number of tools used in this stage to identify whether it is truly statistically improving or if it just looks better on a chart. Tools that are used in the Measure Stage include histograms, Paretos and process capability.

Analyze Stage – Identifying the Root Cause
In the Analyze Stage, use the data collected and validated in the Measure Stage to determine the root causes of the process defects or injuries. A few of the tools that are used in the Analyze Stage include Cause & Effect Fishbone Diagram, Five Whys and Correlation Testing. The fishbone diagram is familiar to most people because of its extensive use in identifying the root cause of accidents. The importance of this stage cannot be understated because if the root cause is not validated, the corrective measures – tied to that root cause – will not provide the desired results.

Improve Stage – The Corrective Measures
After completing the Analyze Stage, potential corrective measures often become evident. During the Improve Stage, it is most important to test the potential corrective measures to see if they will address the root cause. In the safety arena, that does not mean to wait and see if another injury occurs. The root cause needs to be prevented, not the injury. In the case of eye injuries, the identified root cause may be the employees not wearing safety glasses or employees wearing improperly fitting safety glasses. In this case, the Improve Stage would include a process for fitting glasses and providing them to employees. In this stage, pilot trials or other forms of testing effectiveness can be used.

Control Stage – Make it Sustainable
The primary objective of the Control Stage is to monitor results and ensure that the expected improvements are being achieved and sustained. One of the biggest challenges, especially when implementing safety improvements, is ensuring that those improvements will be sustained. Far too often, events or injuries occur and upon analysis, corrective measures were recommended and implemented several years ago for a previous event, but are not working or are not in place for various reasons.

One reason for this could be that a good process was not in place to sustain corrective measures. Actual examples include:
• A safety improvement memo was sent out, but there was no follow-up to ensure that people implemented it.
• A new, safer tool was specified and purchased, but the older, unsafe tool is still found throughout the system. In the case of safety glasses, the employees are no longer using the ones they were fitted with.

Of all of the stages in the DMAIC process, I feel the Control Stage is the most important and most overlooked.

Conclusion
This represents only a small example of the tools and methods that are typically used in the DMAIC process. There is no question that use of Six Sigma and the DMAIC process requires trained facilitators to assist in providing desired results. The results, though, can be substantial if the process is properly followed. If an organization has access to someone with these skills, they can be very helpful in identifying the root causes of injuries and developing sustainable corrective measures. Appropriately utilized, Six Sigma can be an important component in creating an injury-free workplace.

About the Author: Ted Granger, CSSBB, CUSP, is an independent safety consultant affiliated with the Institute for Safety in Powerline Construction. He provides training, lectures and safety consulting services. Prior to his current role, Granger served in various managerial positions during his 37-year career at Florida Power & Light Company. These included T&D operations, human resources, logistics and safety, where he utilized his Six Sigma Black Belt certification. He can be contacted at tedjgranger@gmail.com.