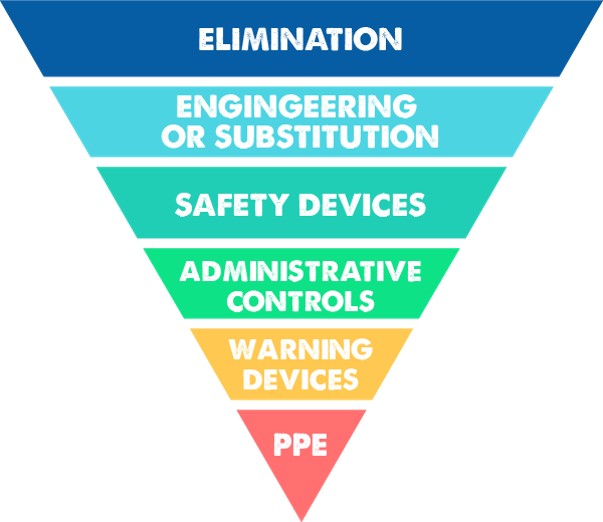 “Get us a bucket truck, a rock and a hard hat. The rest of the class and I will meet you outside in 10 minutes.” Those were my instructions to a participant who, during a recent Frontline program session, challenged me as I was teaching the hierarchy of controls and explaining why PPE should be considered the last line of defense.

The participant was adamant that he had always been trained that PPE is your primary protection and that if you are wearing it, you are protected and can work as you want. The rest of the group validated that was how they understood their training. This put us at an impasse because I firmly believe safety boils down to your ability to identify and control hazards, and I am extremely passionate about using the hierarchy of controls as a decision-making tool to control hazards to the fullest extent possible. I also believe overreliance on PPE is a serious and growing problem, and that far too often, hazards are identified but tolerated or not properly controlled.

After about 10 minutes of failed examples and discussion with this Frontline group, I decided to go another route and requested the bucket truck, rock and hard hat. The participant who had challenged me gave me a quizzical look and replied, “What?” I told him that per his understanding of PPE, if there was a hazard that involved me dropping a rock from a bucket raised 30 feet in the air, he was OK standing underneath the bucket as long as he was wearing his hard hat. I then gave him three choices: eliminate the hazard (I don’t drop the rock); eliminate the risk (he doesn’t stand underneath the bucket); or I drop the rock and he relies on his hard hat for protection.

Suddenly it became obvious to the class why elimination is the first choice in hazard control and PPE is the last line of defense. We then had an amazing and exciting discussion about the hierarchy of controls and how the group was going to change their training. More importantly, the class talked about how they were going to approach hazard mitigation in the future.

As a side note to this example, I have seen industry statistics that indicate about 20 percent of injuries result from being struck by falling objects. Gravity always works, and if you consistently stand underneath others working at elevated positions, eventually something will fall and hit you. As simple as it sounds, we could potentially eliminate a fifth of injuries in this industry by being aware of where we stand.

How the Hierarchy Works
The hierarchy of controls is a valuable tool that provides a structured framework to control hazards. It starts with elimination and ends with PPE. In between are engineering, substitution, safety devices, administrative controls and warning devices. The hierarchy will prevent hazards from causing harm if it is used correctly.

With a fundamental understanding of the hierarchy of controls, it can be used to achieve safety by design and defense in depth. Here’s how it works: Start by asking if the hazard can be eliminated. Too often an assumption is made that this is not possible. The beauty of hazard elimination is that if it is accomplished, you are done. You cannot get electrocuted if the electricity is gone. You cannot get hurt by a cave-in if you design the job so work is performed outside of trenches. You cannot get cut by a knife skinning wire if you use a stripping tool. You cannot have a backing accident if you don’t back up. Safety by design means eliminating the hazard or exposure to the hazard. If elimination cannot be accomplished, move to defense in depth.

Defense in depth essentially means having multiple layers of protection. Warning devices have value, but they afford a worker no protection; safety devices and PPE do that. Administrative controls, such as training, procedures, work methods, lockout/tagout and worker rotation should always be incorporated into hazard mitigation. Engineering and substitution are preferred methods of hazard control as they result in significant reduction of hazard potential.

In order, consideration should be given to elimination, engineering, substitution, safety devices, administrative controls, warning devices and PPE. Imagine for a moment that you are a soccer coach developing your defensive strategy for the big game. Elimination would be your first preference. If the other team does not take any shots on your goal, they cannot score. You’re also going to have a goalie and defensive players with specific assignments. Your team is going to practice and run plays. Referees and umpires are administrative controls in place to ensure rules and procedures are followed.

Your team wouldn’t need a goalie if you could keep the other team from taking shots (safety by design). You can’t do that, so you establish multiple barriers that keep shots from going in the goal, with the last line of defense being the goalie (defense in depth).

In closing, every time you identify a hazard, ask yourself what the hazard is, how it could harm you, how badly it could harm you and how you can control it. Apply the hierarchy of controls to control the hazard to the fullest extent possible, starting by determining if the hazard can be eliminated.

About the Author: David McPeak, CET, CHST, CSP, CSSM, CUSP, is the director of professional development for Utility Business Media’s Incident Prevention Institute (www.ip-institute.com). His experience includes operations management, safety and training roles. McPeak holds multiple safety and training certifications and has received numerous awards. He also has served as chairman of Task Team One of the OSHA ET&D Partnership, as a member of Incident Prevention’s editorial advisory board and as a member of the North Carolina Apprenticeship Council. Reach him at david@utilitybusinessmedia.com.

About the Author: David McPeak, CUSP, CIT, CHST, CSP, CSSM, is the Director of Education for Utility Business Media’s Incident Prevention Institute (ip-institute.com) and the author of “Frontline Leadership – The Hurdle” and “Frontline Incident Prevention – The Hurdle.” He has extensive experience and expertise in leadership, human performance, safety and operations. McPeak is passionate about personal and professional development and believes that intrapersonal and interpersonal skills are key to success. He also is an advanced certified practitioner in DISC, emotional intelligence, the Hartman Value Profile, learning styles and motivators. Reach him at david@utilitybusinessmedia.com.