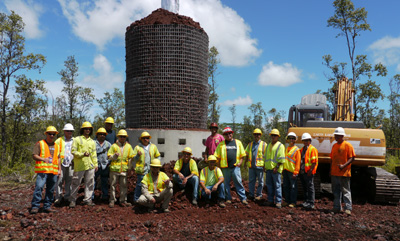 The state of Hawai‘i is located in the middle of the Pacific Ocean, about 2,000 miles away from the coast of the continental United States. This isolated geographic location, combined with the state’s clean energy initiatives, continues to pose unique challenges to Hawaiian Electric as the company strives to meet the demands of customers and the state’s Public Utilities Commission for lower bills and increased levels of renewable energy.

In an effort to meet these demands, the company has moved toward aligning work practices and programs across all three utilities. For the safety divisions – which are located on three separate islands – this has resulted in the need for increased collaboration when developing safety programs. In the past, due to the physical distance between the utilities, their safety departments had, for the most part, operated independently of one another.

Combined, Hawaiian Electric, Maui Electric and Hawai‘i Electric Light employ about 2,800 people. More than 2,000 of those employees work at Hawaiian Electric, while Maui Electric and Hawai‘i Electric Light are much smaller organizations. The difference in the size of each utility has made it challenging to develop safety programs that provide clear guidelines yet offer enough flexibility for each organization to implement them in a manner that fits and addresses their specific needs. For example, all three organizations are in different stages of implementing their safety observation programs. The stages range from a recent introduction of the program to one utility’s workforce all the way to enhancement of the original program, which Hawai‘i Electric Light implemented in July 2013.

A Valuable Safety Resource
Some of the challenges of trying to align the safety programs at the three different utilities have been addressed with the formation of a Directors Council. “We meet monthly to discuss safety-related items that have an impact on all three companies,” said Rick Ravelo, Hawaiian Electric’s director of safety. “Having a formal process in place ensures that we maintain communication, and it provides us with an opportunity to learn more about the safety issues each island faces. This allows us to better determine what programs we should develop on a tri-company level.”

Robert Motooka, CUSP, director of safety at Maui Electric, appreciates the opportunity that the Directors Council provides to work more closely with his counterparts on the other islands. “Developing programs with Hawaiian Electric and Hawai‘i Electric Light has been really valuable because we’re able to share information and resources,” he said. “I especially like that by working together more, we get a good look at what does and doesn’t work on the other islands.”

Taylor Smith, Hawai‘i Electric Light’s director of safety, agreed with both Ravelo’s and Motooka’s sentiments. According to Smith, “Knowing that differences exist, the tri-company Directors Council meeting provides an opportunity for us to network in a way that will go beyond the basics, where we can discuss the most up-to-date information, resources and best practices related to electric utility safety.”

Responding to Iselle
The need to continue to better align work practices among all three organizations becomes more apparent when employees from every island must collaborate on a project, typically when a natural disaster occurs. Each island operates a standalone grid and is therefore vulnerable to the impacts of tropical storms and hurricanes. Hurricane season in Hawai‘i begins in July and lasts through September.

In early August 2014, Hurricane Iselle hit the state. Hawai‘i Island suffered the most damage, and 25,000 customers lost power at the height of the storm, most of them in remote locations. On the island of Maui, 8,000 customers were also left without power. Line crews from Hawaiian Electric and Maui Electric were sent to assist Hawai‘i Electric Light with their restoration efforts. In addition, outside contractors that were already in Hawai`i as well as crews from Kaua‘i Island Utility Cooperative were sent to Hawai‘i Island to assist.

The three utilities faced several challenges while working to respond to the storm. Vehicles and equipment had to be sent over the ocean via barge. Other issues arose because each utility is structured differently due to their operational needs and requirements. For instance, the size of Hawaiian Electric’s construction and maintenance department is about the size of Maui Electric’s entire company. As another example, Hawaiian Electric has separate underground and overhead crews while line crews on the other islands perform both underground and overhead work.

Although the Hurricane Iselle storm restoration response exposed logistical challenges and differences between the three companies, safety remained the No. 1 priority for all responders and those coordinating their efforts. The experience helped to illustrate the importance of developing a cohesive alignment between the three companies while maintaining each company’s style and structure, so that each organization can be both safe and efficient.

Lava Flow Threat
Soon after recovering from Hurricane Iselle, Hawai‘i Electric Light had to determine how to handle an impending lava flow from Kīlauea, a volcano on Hawai‘i Island, which is the only Hawaiian island where an active volcano can be found. Due to the unpredictable nature of the lava flow, Hawai‘i Electric Light worked closely with Hawai‘i County Civil Defense and other agencies when developing plans to maintain power to the affected areas. There was also a strong focus on maintaining the safety of employees and community members.

Beginning in August 2014, the company started to work on the design process for protecting the utility infrastructure. Then, in early October, crews were sent for the first time to experiment with a method of protecting poles from the intense heat of the lava in an effort to maintain service to customers. The design was the result of a collaborative effort between Hawai‘i Electric Light, the University of Hawai‘i at Hilo and the U.S. Geological Survey’s Hawaiian Volcano Observatory. The poles were partially encased in a heat-resistant dispersive material that was wrapped around the bottom half of poles that were in the path of the lava flow. Hawai‘i Electric Light’s Smith, along with his team of safety administrators, also developed job safety analyses that included exposure monitoring plans for air quality as well as site safety assessments for employees required to work within the hot zone and on an active lava field.

Finding Common Ground
The operational and safety challenges that Hawaiian Electric, Maui Electric and Hawai‘i Electric Light face are unique not only in comparison with other utilities on the mainland, but also in comparison with one another. What the three companies have found as common ground is the drive to continuously improve their safety programs and to drive toward a culture of safety excellence that aims at zero injuries. Developing and implementing safety programs that take each company’s individual culture, structure and work practices into consideration is helping Hawaiian Electric as a whole push toward its goal of being one of the safest places to work in both the U.S. and the world.