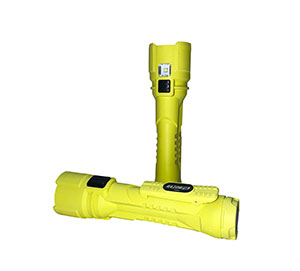 KOEHLER BRIGHTSTAR LLC has announced a new ergonomically designed flashlight, the Razor FSL. It offers a dual beam that helps to prevent slips, trips and falls, and a Class I, Division 1 safety approval.

The Razor FSL’s forward light has a high mode of 325 lumens, carries a seven-hour runtime and projects 236 meters. On the low mode, it has 125 lumens, carries a runtime of 24 hours, and the beam reaches 167 meters. The downlight for the Razor FSL operates either in combination with the forward light or separately. When operated independently, the downlight carries 150 lumens, runs for 20 hours, and the beam shines down as far as 63 meters. When combined with the forward light, the dual beam shines with 300 lumens, has a 10-hour runtime and projects a beam of 167 meters.

This flashlight includes two magnets for hands-free lighting; one magnet is on the integrated belt clip, and a second magnet is at the base of the light. Technicians can place the light on a steel surface either pointed down at the ground or forward to illuminate a spot area at a distance. It carries a 1-meter drop rating and is IPX7 rated waterproof to 1 meter. The Razor FSL is a lightweight 8 ounces, operates on three AA-cell alkaline batteries and is available in a high-visibility yellow color.