Don’t Leave Employees to Fill in the Blanks 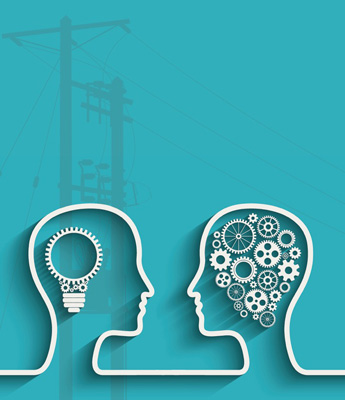 Early in my marriage, my wife asked me to pick up some groceries on my way home. This task seemed easy enough; after all, I had been feeding myself for years. How hard could it be? We needed food and the grocery store had food for sale. The path to success appeared to be pretty well laid out. All I needed was a method of payment and a shopping cart with four functioning wheels.

As I negotiated my way up and down the aisles of the grocery store, I put great thought into what I added to my cart. I made sure to get the basics, including bread, milk and eggs, and I rounded out the cart with some other reasonable dining options. Mission accomplished – or so I thought. When I returned home and we began to unload bags full of bachelor staples, such as chicken wings and Cap’n Crunch, my wife came to realize that my future trips to the grocery store would require more specific guidance. It was clear that my idea of “mission accomplished” was vastly different from hers.

How did a task that seemed so simple go so wrong? Why was it that my wife’s job-specific expectations did not align with my understanding of how I should successfully complete the task? Was this misalignment a failure on my part or was poor communication to blame? When I was given every option in the grocery store to choose from, could my wife truly be upset when I filled in the blanks and chose the options that looked right to me?

The Supervisor’s Perspective
Let’s consider this issue in the context of our working lives. As a supervisor, do you sometimes send messages that are open to interpretation? Do you enable others to fill in the blanks with their definition of the right and safe way to do things? If your answer to both of these questions is yes, can you honestly be upset when someone performs a task differently than you imagined?

If you’re like most people, you have gained a wealth of experience during the course of your lifetime, and part of that experience was paid for in bumps, bruises and blood. Essentially, you’ve learned a lot of lessons the hard way, but now you’re more knowledgeable and better for it. Each of your workers, however, has had a different set of experiences. So while the process for completing a task may seem obvious to you, others won’t necessarily complete that task the same way you would if you do not give them specific guidance. Remember that there’s a reason you’re in a supervisory position. Presumably, you have the experience and good judgment to choose the safest, most efficient method for getting a job done. It’s your responsibility to narrow the number of options for your crew so they can avoid the hard lessons you had to learn in the past. Think about this: Did you ever report to a supervisor who, at one time or another, muttered “What were you thinking?” after you made an error? How great would it have been if that supervisor had expressed very specific expectations before you began your work and saved you from having to fill in the blanks with your best judgment at the time?

There are times when it may not seem like it, but it is rare that someone goes to work thinking, “I’m going to mess things up today.” Workers try their best to perform the tasks assigned to them by drawing from the information provided by their supervisor and then filling in the gaps with their best judgment. This judgment does not include their supervisor’s experience if that experience is not clearly communicated. The bottom line: Don’t leave blanks for your workers to fill in. It bears repeating that your workers are not you. They are independently thinking organisms. Without your guidance, they are going to look at all the options laid out before them and choose the one that makes the most sense to them. If you, as their supervisor, can eliminate most of these options, the chances of them performing the task as you anticipate greatly increase. Be complete and specific in your directions. Don’t just tell them to do a job; rather, inform them about how to do the job safely and successfully. This is not micromanaging. You are establishing standards and expectations to help set up your employees for success.

I want to share a story a past supervisor told me. He once instructed a new loading dock worker to clean up an outside dolly so it could be used inside the building to move office furniture. The supervisor wanted it to have a fresh coat of paint but didn’t want the wheels or plastic handles to get paint on them. He told the new worker to tape up the dolly and spray-paint it red for use in the office building. Some of you may have already guessed how this story ends. When the supervisor returned to check on the worker’s progress, he found that the dolly was wrapped in tape from top to bottom and the tape was spray-painted red. To the supervisor’s credit, he recognized his role in this outcome. “I couldn’t even be mad,” he told me. “The worker did exactly what I said. I thought about it and realized that this guy had spent very little time in the office area of the facility. He had no idea what they did or why they would need a completely taped up and spray-painted dolly, but he was going to give them what they requested.” The worker had filled in the blanks that his supervisor had left open for him. Of course, every worker has a responsibility to ask questions if he or she feels unsure about the task to be performed, but recognizing and admitting a lack of understanding is often difficult.

The Worker’s Perspective
Let’s now reflect on this issue from a worker’s perspective. As a worker, do you ever find yourself attempting to fill in the blanks? Can you recall a situation in which you found there were multiple ways to complete a task and you weren’t sure which one to choose? Do you sometimes find yourself trying to use your best judgment to meet your supervisor’s expectations, but you aren’t 100 percent sure what those expectations are?

Effective communication is a two-way street. Your supervisor may assume you know the best course of action. You may think you know, too. But if you don’t take a moment to question your actions or to fully understand your role, you are setting yourself up for failure. You have to be your own advocate. You need to speak up and ask for specific guidance or solicit some operating experience from your supervisor. Understand that most supervisors would rather answer 100 so-called dumb questions from you than answer that one hard question from company leadership: Why did this incident occur on your watch?

When you are given guidance, make sure you completely understand the expectations. It’s not enough to know what to do; you also need to know how to do it. If you find yourself with several options to complete a task, stop and get clarification from your supervisor. Don’t try to fill in the blanks.

Create the Right Environment
If workers are going to do what we ask of them and seek further guidance, then supervisors have to ensure that they create an environment in which questions are welcomed. Workers – especially those who are newer and inexperienced – are in a tough position. We are asking them to first recognize what they don’t know, and then to admit their ignorance. They don’t want to disappoint their supervisors and they certainly don’t want to seem incompetent to the rest of the crew. They are motivated to seem capable and effective for the sake of their job security and the esteem of their co-workers. And yet effective supervisors are easily approached with even the simplest of questions. They recognize that it takes a lot less time and effort to ensure a worker knows what to do and how to do it than it does to complete rework or handle an incident and its aftermath. Not only should supervisors be open to every question, no matter how basic, but they should thank their workers for asking them. A worker who asks a question may have just saved his supervisor a great deal of time and – more importantly – may have protected himself, his co-workers and company equipment in the process.

It’s important that we take the time each day to think about how we communicate with each other. Ensure you are giving your employees direction that is specific and not open to interpretation. Simply saying “be safe” is not enough; give people actionable guidance, such as, “On this job you need to keep your hands out of the line of fire by …”; or, “Make sure you use the following PPE for this task …”; or, “Here are the human performance tools we are going to use on this job …” Be complete, be specific and don’t leave any blanks for your workers to fill in.

The lessons described within this article are ones my wife and I learned the hard way with my ill-fated “get some groceries” outing. My trips to the grocery store these days now involve detailed lists – some of which look eerily similar to a work package – and generally some direct supervisor engagement.

About the Author: Dave Sowers is the director of performance improvement at Knowledge Vine LLC (www.knowledgevine.com), a human performance training and consulting organization. He is a veteran of the U.S. Navy’s nuclear power program. Sowers has more than 25 years of industrial experience gained through his work in the military, semiconductor manufacturing, commercial nuclear power and hydro-electric generation. He holds a bachelor’s degree in resources management and a master’s degree in both management and emergency management and homeland security.

Dave Sowers is the director of performance improvement at Knowledge Vine LLC (www.knowledgevine.com), a human performance training and consulting organization. He is a veteran of the U.S. Navy’s nuclear power program. Sowers has more than 25 years of industrial experience gained through his work in the military, semiconductor manufacturing, commercial nuclear power and hydro-electric generation. He holds a bachelor’s degree in resources management and a master’s degree in both management and emergency management and homeland security.