Arc Flash and the Benefits of Wearing PPE 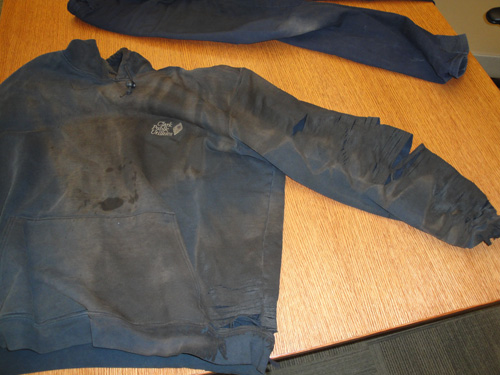 Clark Public Utilities is one of the proactive utilities. We performed our arc hazard analysis in 2007-2008, and our employees have been in full arc-rated clothing since then. The hazard level for the majority of our system is 8 cal/cm2, and this is the minimum level of arc-rated clothing that our employees wear. We do have higher arc hazard levels in some sections of our system. For instance, the level is 25 cal/cm2 and higher in our substations, and it’s also 25 cal/cm2 in our 277-/480-volt commercial secondary and commercial metering systems. Our engineering group was able to reduce the hazard levels in our substations when they installed an arc flash switch, which effectively reduced the arc hazard level to below 8 cal/cm2. However, when we engage the arc flash switch, we open ourselves to a miscoordination of the system. We provide an increased level of arc-rated PPE for our employees while they work on the metering installations and secondary systems and, if possible, we de-energize for employee protection.

As we are aware that PPE is our last line of defense in the prevention of employee injuries, we prefer that engineering controls be implemented in order to create a safer workplace. The reality is that sometimes those controls are not enough. For our part, we have a good group of line employees who want to do a good job and work safely. They take the time to tailboard and discuss eliminating as many hazards as possible. However, as we experienced at our company not that long ago, sometimes in their desire to complete work assignments in a timely manner, things can go sideways.

Before I explain the incident that occurred, I have to ask: Who knows exactly what their employees are doing in the field at all times? Does the crew always follow the work plan as initially discussed? I expect that the answers to these questions are much the same as mine. First, we cannot possibly know everything about what our employees are doing in the field if we are not there with them all of the time. And many times they deviate from the initial work plan, which should not come as a surprise to anyone. I know that when I was working in the field as a journeyman or foreman, I sometimes changed the work plan for a variety of reasons. Most times my supervisor did not know this was happening until he showed up on the job or I informed him at the end of the day. From my experience, this is pretty much a standard operating procedure for a line crew.

Origins of the Arc Flash Incident
In September 2012 our utility created a new position: the system reliability inspector. He is a journeyman lineman armed with an infrared camera who inspects one feeder at a time from the substation out to the end of each tap line. Follow-up work is coordinated with various supervisors in order to repair problems as they are identified; they are then placed on a priority list. It was during one of these system maintenance jobs in February 2013 that we experienced an arc flash.

One of the problems our system reliability inspector found was a hot connection in a three-phase pad-mounted switch cabinet on the 600A T body side. The crew was assigned the maintenance job on February 19, 2013, and the weather was clear and sunny when they started work on the switch cabinet at approximately 1 p.m. The crew consisted of a working foreman, a journeyman lineman and a lineman apprentice. The crew had previously discussed the process they were going to use to complete this work, and the decision was made to use hot sticks – a two-piece pliers stick and a shotgun – a long Allen wrench, a torque wrench and a socket wrench on another hot stick. The lineman on the crew had successfully used these tools and this procedure to fix another hot spot, so this process was discussed in the morning before they left the shop and then again during the tailboard at the work location.

The crew foreman called for his hold tag (one shot) before starting the work. There was a switch order written to switch out and establish a clearance on the switch cabinet, but he chose not to de-energize the switch cabinet because the previously discussed work plan did not require it. The dispatcher gave the foreman the requested hold tag but did not question if the switch order was going to be worked. The crew commenced to fix the hot spot with the 600A T bodies still energized. The crew removed the dust cover on the outer side of the T body. They inserted the long Allen wrench with the pliers hot stick. They used the socket hot stick to seat the Allen wrench and torque the connection. When they were satisfied that the connection was torqued to the correct value, they reversed the process to remove the Allen wrench and reinstall the dust cover.

Mitigating Effects of PPE
The crew thought they fixed the problem T body so easily that as long as they were already there and set up, they would check the other five T bodies. Everything went well for four of the five remaining T bodies. On the final T body, something went wrong and the crew experienced a primary 7,200-volt phase-to-ground fault. Because of the arc-in-a-box effect, the ensuing arc flash came out at the lineman who was standing in front of the switch cabinet, and he took a pretty good blast. The two other crew members were standing to the side and behind the switch cabinet door, so they were effectively out of the arc flash. The substation breaker relays operated as they should and, seeing the fault, opened the substation breaker, de-energizing the circuit.

The work location was approximately 3,800 feet from the substation. The line was 397 MCM AL armless construction up to where it went underground. The fault was single-phase line to ground and was calculated at 4,891A in ASPEN OneLiner, a PC-based short-circuit and relay coordination program used by our engineers. The substation event log recorded an A phase-to-ground fault at 4,900A. Clearing time was 0.5935 seconds (35.6 cycles). Our employee was wearing all of the PPE we required at the time. A hard hat protected his hair – it was only singed on the side and back – safety glasses protected his eyes, his leather boots were not impacted at all, his gloves protected his hands, and his arc-rated sweatshirt and pants performed well and took the brunt of the arc flash. Our employee was wearing an NSA 14-ounce Reliant Fleece arc-rated sweatshirt (EBT 28 cal/cm2), Riverside Westex-fabric pants (ATPV 12 cal/cm2) and cotton undergarments that were covered by the outer layer of arc-rated clothing. The only place our employee received injuries was to his face, which sustained first- and second-degree burns.

The arc flash impact was most evident on the left side of his body, which was closest to the arc flash. From there, it worked around both the back and front of his body before the arc was extinguished. The arc-rated clothes were brittle where they took the brunt of the arc flash. Other areas showed evidence of flame burnout as the arc wrapped around his body. If he had not been wearing his entire arc-rated clothing set, he would have sustained severe burn injuries due to the severity of the arc flash. The outer layer of PPE performed as expected and there was no evidence of damage or impact of any kind to any other part of his body or the undergarments he was wearing.

He was taken by a supervisor to the local hospital where he was treated and released. During the initial treatment, the hospital contacted the burn center in Portland, Ore., and sent pictures for them to examine. It was decided that the burn center would do a follow-up the next day. As a result, our employee remained off work for one week.

Immediately after the incident, the company’s operations director issued a statement that any 600A equipment would be de-energized before any work was to be done. This work practice was discussed with the line crews the next morning during a whiteboard discussion of the incident.

We determined that communication between the supervisor and crew foreman did not specifically identify the preferred procedure for the work. We also identified a lack of communication between the foreman and the dispatcher. The foreman did not inform the dispatcher of the work to be performed, and the dispatcher did not question the foreman on the need for the hold tag. A switch order was written for the work, but it was not used to clear and de-energize the switch cabinet prior to starting the maintenance. The T body should have been de-energized and the connection taken apart in order to complete a visual inspection of the hot connection.

Unfortunately, the investigation did not turn up an exact location where the fault started. There certainly was evidence of arcing and ground wire/case damage, but we could not find the origin of the arc. The employees were interviewed, but none of them could identify exactly what happened. The employees reported that the process had been successful five times prior to the incident, and this last phase was not treated any differently than the other five.

The Elastimold T bodies were removed and returned to the factory for testing but no defects were found. The switch cabinet was cleaned and put back in service.

The Joint Safety Committee recommended that:
• Anytime a hot connection is found, the device shall be de-energized, taken apart and inspected for damage.
• Any 600A equipment that needs to be worked on will be de-energized.
• Employees in all departments that complete live-line work will be informed of this incident and the committee’s recommendations.
• Supervisors and employees working to improve system reliability will meet to discuss how the repairs will be made. This information will be shared with all line department employees before the new process is implemented.
• Employees shall wear arc-rated face shields rated at a minimum of 12 cal/cm2.
• Injured employees shall be transported to the hospital by ambulance.
• The utility should enforce and maintain a clear access area in front of and around underground electrical equipment, providing a safe work area.

Conclusion
The day of the incident started out with a crew discussion about a well-intentioned method to speed up the work assignment, and it ended with one of our employees being injured. Our line crew and employees were very fortunate that day, and we all learned from this incident. One very positive element emerged from this incident, which is that when arc-rated PPE is properly used and worn, it can help prevent or limit the extent of an injury.

About the Author: Michael J. Getman, CUSP, MBA, is safety manager at Clark Public Utilities. He has more than 40 years of utility industry experience in roles ranging from line apprentice to acting general manager. Getman is a member of ASSE and the Clark College Power Utilities Advisory Committee. He also serves on the executive board of the Utility Safety & Ops Leadership Network. In 2013, Getman was named the recipient of the Carolyn Alkire Safety Advocate Award.