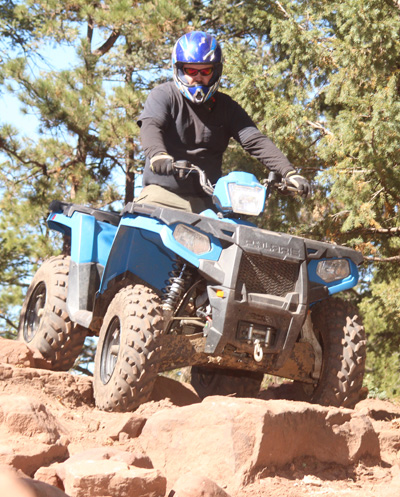 The need to safely access hard-to-reach areas continues to be a struggle in numerous industries, including utilities. Historically, people have pushed the limits of machinery and designed better tools in attempts to access such areas. In the early days of automobiles, for instance, enthusiasts modified and improved the designs of their vehicles, enabling them to travel farther across terrain on which the vehicles were never originally designed to travel. As technology and industry continued to progress, manufacturers began to design vehicles specifically intended for off-road applications, which led to the development of a new vehicle category: the all-terrain vehicle (ATV). Over time, the ATV label – which originally applied to Jeeps – became synonymous with four-wheelers, or quads. As even more time passed, ATVs eventually became useful not only as recreational vehicles but as staples of off-road transportation for industrial uses as well.

While ATVs were first produced specifically for utility use in the early 1980s, the utility task vehicle (UTV) – also known as a side-by-side – was initially launched by Kawasaki in 1988 as the MULE, an acronym for multi-use light equipment. The UTV provides features that cater better to industrial applications, such as more seating and cargo capacity. ATV-type vehicles existed long before the 1980s, but they were designed and used almost exclusively by the recreational market. Since utility use of ATVs and UTVs did not exist before the 1980s and became more commonplace in the 1990s, the market and technology are still relatively new from a regulatory standpoint. However, due to significant advancements in the functionality and reliability of these vehicles, industrial use has grown dramatically in recent years. That has prompted an increase in the need to identify proper use of these machines as transportation to access job sites or as tools to aid workers in performing tasks.

Vehicle Challenges
Employee safety is an important consideration when selecting off-road access equipment, such as ATVs and UTVs, and identifying proper usage techniques. However, ATVs and UTVs pose a unique challenge compared to most other workplace equipment. They are extremely capable machines, as proven regularly by recreational enthusiasts. Employers and safety managers can easily fall into the trap of viewing workers simply as who they are at work and ignoring their recreational interests. It is common to find utility employees who spend much of their personal time engaged in high-adrenaline hobbies, including riding ATVs and UTVs – the same machines that may also be entrusted to them at work. These employees know exactly what the machines are capable of and likely have pushed them to their limits and beyond during their free time. This creates a need for employers and safety managers to ensure that these employees can handle ATVs and UTVs in a safe manner when using them for work purposes, and that they understand the expectations of the company. This can be especially challenging because these vehicles typically are used in remote and hard-to-reach areas that often are outside immediate managerial supervision.

There are a couple other challenges to be aware of as well when it comes to these machines. The first is that a utility likely employs some workers who have absolutely no experience operating them. Second, it is easy for both users and management to assume that ATVs and UTVs operate just as any other piece of equipment does, and that anyone should be capable of operating them. The fact is that the handling characteristics of ATVs and UTVs are quite different from one another, and they are vastly different than those of a road-driven car or truck.

Due to the various challenges that ATV and UTV operation present, it is critical to ensure that every worker who comes into contact with the machines has received the training necessary to safely and successfully operate them.

Safe Off-Road Operation
Strong off-road driving skills typically take years to develop. One skill in particular that can pose a challenge for new ATV/UTV drivers is selecting a proper line on a trail and then successfully placing the vehicle exactly where intended. The ability to execute this type of task may be simple for a driver with a lot of off-road experience, but it has proven to be tough for operators who are new to driving these vehicles.

As an example, on a trail with a deep rut running down the middle of it, an experienced driver usually can choose a line that will keep the vehicle level throughout the area. New drivers, however, can get into dangerous situations in that same area simply by choosing a slightly different line or missing their intended path by a foot or two.

Acquiring the skill to properly select a line and stick to it requires significant time behind the wheel, which often is not available to drivers through on-the-job training by itself. In addition, if a new ATV/UTV driver is solely learning to select safe lines while on the job, safety can be compromised, and reaching the job site will take extra time due to the extra supervision requirements and mistakes that will be made along the way. It is critical during those times that the employee is closely supervised and that the learning process is not rushed.

Safe off-road operation of a motor vehicle requires a developed feel for the vehicle. While it takes an extensive amount of time to develop this feel, the payoff is that it can help users determine what the machine will do in different situations, including anticipating when a maneuver might go wrong – before it’s too late.

The feel of a machine closely relates to selection of a line, and it also pertains to throttle control. The average driver of an on-road vehicle thinks little about the effects of applying the throttle; to go faster, they simply push down harder on the gas pedal. On off-road terrain, however, applying more throttle has significant implications. As a vehicle accelerates forward, its center of gravity is shifted rearward, decreasing the weight on the front of the machine and causing it to rise. Conversely, decelerating shifts the vehicle’s weight forward and causes the front of the machine to squat. With the soft suspension of off-road vehicles, this shift alone can affect handling and control, even when driving in a straight line. When the throttle is applied while climbing up or down steep slopes, or traversing hills, operators with an underdeveloped feel for throttle control can find themselves in precarious situations.

Keep in mind that an ATV’s stability relies heavily on the operator’s movements and the location of their center of gravity. A UTV, on the other hand, does not respond much at all as an operator’s weight shifts around. So, similar to throttle control, this requires an operator to develop a feel for how their off-road vehicle will respond to their input. An employee who typically operates a UTV might not consider the necessity of shifting weight around if they are provided with an ATV instead. Of course, it’s also possible that an operator who usually drives an ATV might choose a line where shifting body weight would keep an ATV stable, without realizing that such a shift does not affect the UTV much and can result in a dangerous situation due to unfamiliarity with the machine. When analyzing case studies of ATV accidents, it is not out of the ordinary for improper body position for the terrain to be identified as the immediate cause of an accident. It is common to see inexperienced ATV operators standing on the rear rack of an ATV or sitting on the front rack while attempting to climb a steep slope. These are dangerous riding positions that violate manufacturer procedures and often lead to accidents and injuries.

From Conservative to Complacent
Both experienced and inexperienced operators face one similar challenge as they spend more time on ATVs and UTVs: complacency associated with an increased comfort level on the vehicles. Whether a machine is used recreationally or industrially, the one thing that tends to hold true with operators is that they become less conservative with their driving choices as the day progresses and more willing to push the limits of the machine. Unfortunately, this behavior often continues until the machine’s limits eventually are reached, leading to a potentially dangerous way to learn a lesson.

Ultimately, an employer who chooses to provide ATVs and/or UTVs as transport for employees must identify the hazards associated with the machines and train workers accordingly. Many techniques and maneuvers that are commonplace in the recreational off-road driving world are unacceptable in the workplace, and it is up to the employer to emphasize proper procedures and expectations before allowing workers to use these machines. While selecting an experienced worker as an operator is an excellent starting point, it is necessary to establish safe parameters for ATV/UTV operation since experienced operators likely exceed the safety limits when they operate similar machinery in recreational environments. In order to gain the experience necessary to safely operate ATVs and UTVs, it is strongly recommended that both experienced and inexperienced operators attend dedicated training before workplace use. This will help them develop the skills necessary for safe operation that complies with industrial standards, and develop the proper feel for specific machine types in a controlled, supervised environment.

About the Author: As a senior instructor at Safety One Training International Inc. (www.safetyoneinc.com), Steve Andreas leads classes on a variety of topics, including ATV/UTV safety, snowcat operations and at-height training. He is an enthusiast in the off-road community with extensive experience in mechanics, operating machinery in difficult terrain and metal fabrication for off-road applications.