Voice of Experience: The Value of Worker Training

Many recent articles I have read in other magazines and via social media emphasize the importance of worker training. I couldn’t agree more. It is both important and valuable that employers invest in training for new employees entering the industry as well as current employees. While the return on investment cannot always be accurately measured and calculated, the ROI does exist nonetheless – just imagine what injury and fatality statistics would look like if we did not train our workers.

One of an employer’s training-related responsibilities is to investigate cases of failure to follow training that result in property damage, injuries or fatalities. OSHA also obligates employers to report any accident that requires medical attention beyond first aid, if the accident is work-related. And risk management professionals and certified loss control professionals are required to investigate property damage involving employees for insurance purposes. Loss control can be difficult to track because damage is not always immediate, and the cost of damages may not be directly attributable to failure to use proper training. In addition, a bad underground splice or a failed connection on primary or secondary that results in property damage may or may not be recorded by an employer as a failure to use proper training.

I understand that we are human beings, and because we are human, we make mistakes. And yet, I would like for all of us to think about the possibility of following all rules and regulations all the time – in short, I want all of us to strive to operate excellently. By adhering to what we learn in our training and using the correct procedures to perform our work, we can protect lives and prevent property damage.

With that said, I am now going to revisit two events that I was personally involved in. I want to discuss these particular events because they demonstrate how serious the outcomes could have been if workers had not followed their training.

Event One
The first event involved the simple method of checking out a new service. In this case, a short was discovered by a worker before any property or equipment damage occurred. The discovery was the result of employee training that had been developed, provided and reviewed over the years because of past damage to customer property. In this event, the employee didn’t create the hazard; he discovered it while utilizing training that had been provided to him. 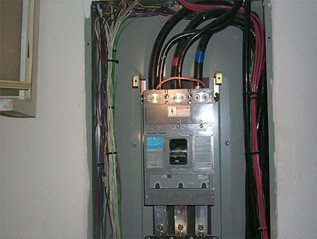 As you can see in the picture above, a jumper was installed by an electrician to heat up all circuits in a building that had been remodeled. The electrician completed his work by pulling a piece of Romex from the temporary pole and making temporary connections at the service entrance. When he completed checkout, he put the cover back on the distribution panel, rolled up the Romex and left. The electrical inspector inspected the completed job, signed off on the equipment and issued a permit of approval for reconnection.

The utility employee then stopped by to install the current transformers for the meter and connect the quadruplex services to the customer’s equipment. This employee connects hundreds of meters and services every year, but this service was a surprise.

His first procedure was to “ring out” the service with a fluke meter to ensure no shorts or loads were present on the new service. The procedure was a check between neutral to A phase, neutral to B phase and neutral to C phase. All of those were clear. Next was a check of A phase to B phase to C phase, and then B phase to C phase. Everything was still clear. When checking A phase to C phase, the employee received an audible alert about a dead short. He went back to double-check and it was still there. The employee then called me, and I went to the site to assist him. He showed me what he had found and proceeded to verify for the third time that a short may be present. We went into the unoccupied building and removed the panel cover, where I took the picture seen above.

The question is, what would have happened if the employee had not followed his training? The result could have been a blown transformer fuse, damaged customer equipment or possibly a fire. Just the simple fact that the employee acted upon his proper training prevented an outage and perhaps a damage claim.

Event Two
The second event happened a long while ago, but it is an example of how two employees who followed their training prevented an electrical contact that could have been serious enough to kill them.

After using trouble-locating equipment, it was discovered that the communication company had used horizontal drilling when installing telephone cables. They had drilled through one location where four services crossed the street. All four services were damaged. The other three services had not completely failed, and there was enough contact in the damaged location to energize the service that had been disconnected. Had the crew not followed all the rules and verified the absence of voltage as they had been trained to do, there would have been an electrical contact.

These are just two examples of close calls that can happen in our industry. In these instances, what was the value of the workers’ training? How much loss and injury were avoided simply by the workers following the training they had been given?