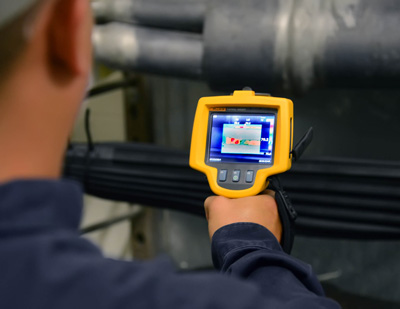 For more than 100 years, Commonwealth Edison – commonly known as ComEd – has been powering the lives of customers across Northern Illinois, including those in Chicago, a city that has thousands of circuit miles of medium-voltage distribution cables installed in conduit and manhole systems.

Over the decades, ComEd’s underground cable splicers have experienced failures of distribution cable system components, including cables, joints and terminations, while employees were working in manholes and vaults. A large number of cable system failures occurred at cable joints in underground manholes. Some of these failures were due to degradation of the electrical connection inside these joints.

One of the hazards associated with a cable system failure is the risk of employee exposure to an electrical arc flash. This type of event can result in temperatures in excess of 35,000 degrees Fahrenheit, producing a blinding flash and causing aluminum and copper cabling components to instantly expand. If an employee is working adjacent to equipment affected by the blast, the heat generated can cause third-degree burns, and the pressure wave can damage hearing and throw the worker into the surrounding structure.

According to OSHA 29 CFR 1910.269(t)(7)(i), “hot localized surface temperatures of cables or joints” are an abnormality that may be indicative of an impending fault. Unless the employer can demonstrate that the conditions could not lead to a fault, “the employer shall deenergize the cable with the abnormality before any employee may work in the manhole or vault, except when service-load conditions and a lack of feasible alternatives require that the cable remain energized.” However, “employees may enter the manhole or vault provided the employer protects them from the possible effects of a failure using shields or other devices that are capable of containing the adverse effects of a fault.”

Because ComEd has an unwavering commitment to make the safety of our employees and customers the No. 1 priority, we believe there is no job or task so important that we cannot take the time needed to do it safely. Thus, based on a company review of technologies that can supplement visual inspections, ComEd now requires the use of hand-held infrared (IR) thermography cameras to improve the safety of its underground workers. Toward the end of the 1990s, a proliferation of rugged, lightweight, low-cost thermography cameras became available. The dramatic lowering of camera costs made mass deployment of thermographic technology feasible.

What is IR Thermography?
IR thermography is a technique used to translate heat radiated by an object in the IR spectrum into the visible spectrum.

Visible light is electromagnetic radiation with a wavelength of approximately 400 to 700 nanometers. These wavelengths can be detected by the human eye; we perceive the various wavelengths as different colors. The longest wavelength – which corresponds to the lowest frequency – is seen by humans as the color red, followed by the other known colors of the rainbow: orange, yellow, green, blue, indigo and violet. Violet has the shortest wavelength and highest frequency.

IR light is electromagnetic radiation with a wavelength longer than visible light, and can be produced by electrical hot spots that radiate heat. IR cameras can assign a color or shading based on temperature.
• Color: Red is hot; blue is cold.
• Grayscale: Bright is hot; dark is cold.

ComEd initiated a routine IR thermography program to assess cable accessories installed within substation cable spaces. The thermography program and subsequent joint analysis identified the following series of common factors contributing to the observed overheating of pre-molded joints that were installed within the substation cable spaces:
• Failure to remove the oxide layer on aluminum conductor by wire brushing.
• Removal of oxide inhibitor from the connector prior to crimping.
• Failure to fully insert the conductor into the connector.
• Partially severing the outer strand layer of the conductor when performing the cable insulation cutback.
• Inadequate number of compressions on both sides of the connector.
• Inadequate depth of compressions.

Thermography of cables and cable accessories involves an indirect temperature measurement because there is considerable thermal insulation between the conductor or connector and the surface seen by the IR camera. The thermal gradient depends on the amount of thermal insulation and how hot the internal problem is. In ComEd’s underground system, various forms of arc proofing also may be applied on some medium-voltage cables, as well as on joints in distribution manholes and vaults to protect them from arc flashes resulting from faults on adjacent cables or joints. The arc proofing adds to the thermal insulation, but it does not necessarily inhibit the ability to detect internal problems.

A current flowing through a high resistance caused by a poor electrical contact between two surfaces results in an electrical I2R loss appearing in the form of heat. This heating may only be present during the last 10 percent or less of the cable accessory’s life.

Based on industry specifications, such as ANSI C119.4, connectors should experience lower operating temperatures than their respective conductor. This means that any time the temperature of a connector is greater than the temperature of its respective conductor, a higher-resistance connection exists, and a failure can be expected but not precisely predicted. However, it is probable that degradation will occur faster with increased load.

Worker Safety vs. Equipment Reliability
ComEd underground employees asked for a distinction in the thermography action criteria as it related to equipment reliability versus worker safety. Compensatory action was requested while underground employees are working in manholes. While manholes vary in size, they are small structures, and cable and joints surround the employees in close proximity.

NFPA 70B, “Recommended Practice for Electrical Equipment Maintenance,” provides guidance on performing an IR scan. The guidance is based on the ANSI/NETA Standard for Maintenance Testing Specifications for Electrical Power Equipment and Systems. The specifications provide guidelines to determine when immediate repair is required by comparing the difference in temperature (ΔT) between similar components under similar loading.
• ΔT of 1°C to 3°C can indicate possible deficiency and warrant investigation.
• ΔT of 4°C to 15°C can indicate deficiency; repairs should be made as time permits.
• ΔT of 16°C or above can indicate major deficiency; repairs should be made immediately.

For a given load condition, the higher the temperature rise, the worse the problem.

Corrective Actions for Rise in Localized Temperature Differentials (ΔT)
• ΔT of 1-3°C (1-5°F):
o Place feeder on suspension of reclose.
o Monitor every one to two hours to account for changes in loading.
o Priority 40 repair: Work shall be completed not to exceed the predominant maintenance cycle interval. Impact on SAIFI/CAIDI reliability indicators would result only if the condition degrades.
• ΔT of 4-14°C (6-25°F):
o Exit workspace and de-energize before re-entry.
o Priority 30 repair: Typically completed within nine months and should not exceed one year. These items have a moderate probability of affecting CAIDI or SAIFI if not addressed within a year’s time frame.
• ΔT of 15°C and above (26°F and above):
o Exit workspace and de-energize before re-entry.
o Place “abnormal condition” tags at the top of the enclosed space at each entrance.
o Priority 20 repair: Typically completed within 14 days and should not exceed 30 days. These items have a high probability of affecting CAIDI, SAIFI or safety.

Precautionary IR thermography scans can be performed by a trained employee when working for an extended time frame – typically 15 minutes – within an enclosed space containing cables or cable accessories energized at 4 kV, 12 kV or 34 kV. Upon entering an enclosed space, employees first perform a visual overview of the equipment and structure to determine if any conditions warrant immediate exit of the space. Once it is determined that it is safe to continue occupying the space, an IR scan of the various components is performed.

An IR scan is not required if the scan would take longer to complete than the actual task to be performed, or if work is performed in a de-energized enclosed space.

Additionally, to account for daily load cycles and routine switching activities, IR thermography scans shall be performed every four hours and recorded on the job brief.

Employee Training
A thermographic survey can only be conducted by a person who is proficient with the scanning equipment. Camera settings will impact the readings obtained and are critical to understanding if an issue exists and whether corrective action or further investigation should take place.

ComEd conducted instructor-led training to review camera settings that provide the best images to help identify any areas of concern that may be present.

Employees are taught to slowly scan cables from the point they enter a structure to the point they exit the structure. Excessive surface temperature may indicate that the cable is operating at or above its maximum conductor temperature rating, well above load rating. A localized temperature rise in about a 1- to 2-inch area over the prevailing temperature of the rest of the cable may be a sign of possible deterioration that could lead to a future failure.

ComEd employees also are taught to scan cable accessories and compare their temperatures with the adjacent conductor they are connected to or adjacent phases of the same feeder at similar loads. Feeder load imbalances can cause variability between phases. Additionally, due to daily load cycles, cable accessories that display elevated temperatures, but are below an action threshold, should be monitored every two hours while working in an enclosed space.

At ComEd, employees actively work to address safety concerns and improve work practices. The thermography best practice described within this article is now being shared with peer utilities within the Exelon family of companies, including Atlantic City Electric, Baltimore Gas and Electric Co., Delmarva Power, PECO and Pepco Holdings.

About the Authors: Peter Tyschenko is manager of distribution capacity planning at Commonwealth Edison. He earned a bachelor’s degree in electrical engineering from the University of Illinois at Chicago and joined ComEd after graduation. Tyschenko’s activities have included field testing, design, work management, reliability and engineering equipment standards. Reach him at peter.tyschenko@comed.com.

Michael Meathe is executive assistant to Commonwealth Edison’s chief operating officer. He has been involved in a broad range of activities, including cable splicing, work management and management of regional electric operations. Meathe also led ComEd’s Underground Forum to trial and implemented the routine use of thermography in underground structures. He can be reached at michael.meathe@comed.com.