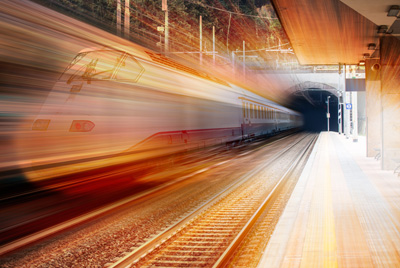 Last summer my extended family planned and hosted a long-overdue family reunion. This one was particularly special because my Uncle Roy, who is now in his 80s, was there, and it was the first time in many years that I had the opportunity to see and spend time with him. Prior to his retirement, Uncle Roy was a railroad engineer in charge of and responsible for driving a freight train engine. From a safety perspective, I should explain a few details about trains before I continue. First, a typical freight train can be 120 to 140 cars or approximately one-and-one-half miles in length. Second, if a train is traveling at a moderate speed of 55 mph, it will take more than one mile – or 18 football fields – before that train comes to a stop. And finally, a train can’t swerve to avoid an object in its path. The aforementioned facts should give you a clue as to where we are heading with this article.

After getting reacquainted with Uncle Roy at the reunion, I asked him to tell me about his days as a train engineer. His face lit up at the question, and he proceeded to tell me about his love for the railroad. Uncle Roy probably could have gone on for hours, but at a certain point – and I’m not entirely sure why I did this, except that I have spent quite a bit of time focused on safety efforts in diverse organizations – I asked him if he’d ever hit anything while driving a train. Uncle Roy’s demeanor changed as he described the multitude of times his train had hit objects on the tracks, including animals, chairs, coolers, camping equipment and even cars. In one instance, the driver of a car was clearly trying to get across the tracks as the train approached, even though the gates were down and the lights were flashing. Unfortunately, the driver was not successful in his attempt and another unnecessary fatality occurred that night.

As I clearly envisioned the devastation of that scene in my mind’s eye, I was only able to mumble something to the effect of, “That must have been quite the accident.” To this day, what Uncle Roy said next is still one of the most profound and memorable statements I have ever heard in the safety industry. In a firm, matter-of-fact voice, he said, “Neil, that wasn’t an accident. That was an on-purpose! The gates were down, the lights were flashing, I was sounding my horn repeatedly, and yet that driver decided to ignore all of those signals and tried to beat a fast-moving train weighing hundreds of tons. No, Neil, that wasn’t an accident. That was clearly an on-purpose.”

The notion of “on-purpose” has stuck with me as I have read report after report about people and their behaviors. You, too, have likely heard stories about someone who became angry because he didn’t get the proper change from a soda machine and began to rock the machine back and forth until it fell and crushed him. Or maybe it was a woman who was driving too close to the car in front of her and couldn’t stop in time to avoid a crash when the other driver had to slam on his brakes. Or perhaps you’ve heard about an individual who learned about gravity the hard way by trying to hang a picture while standing on a rolling chair. In fact, you could probably offer some similar stories from reports you have filed over your years of work in the utility safety industry, am I right? The question we should all be asking is, how can situations like these be referred to as accidents when any reasonable person knows they could have been prevented? Based on the actions people engaged in that resulted in their injuries, even referring to these instances as incidents seems to be too generous. But I digress.

The Power of VABEs
In June 2015, I successfully defended my dissertation for a Ph.D. in industrial and organizational psychology. While this six-year journey was arduous at times, the majority of the experience – during which I learned about human psychology and why we do many of the things we do – was fascinating and helped to explain the sometimes inexplicable behaviors of people in the context of safety. One such psychological phenomenon is what I refer to as the “above the line” and “below the line” elements of the information-synthesis-decision process we all go through with regard to the hundreds of decisions we make every day.

The above-the-line elements relate to the mechanics and operational side of the decision-making process, such as putting on PPE before entering a hazardous work area, performing the circle of safety before backing up a vehicle, and following lockout/tagout procedures before engaging in service or maintenance activities. To put it simply, above-the-line decisions pertain mostly to the conscious thought process. Unfortunately, especially for those of us responsible for safety, the majority of human behavior is not the result of above-the-line or conscious thought. Indeed, more than 95 percent of all human behavior originates at the below-the-line level. This is the level that professor and author James G.S. Clawson, in a 2009 Management Decision article titled “Level Three common sense” (see www.emeraldinsight.com/doi/abs/10.1108/00251740910946723), refers to as “VABEs” – the values, assumptions, beliefs and expectations that develop within people as a result of their upbringing, education, work experiences and hundreds of other life experiences.

VABEs influence every aspect of a person’s life and serve as behavioral navigation tools. They inform moral and ethical judgments, and when to say yes and no. They also guide the multitude of priorities established and decisions made by an individual every day. VABEs are so influential that common-sense options (like wearing your PPE even when it’s hot outside) that run counter to an individual’s VABEs (such as someone believing that nothing bad will happen if they don’t wear PPE because they’ve performed the same task hundreds of times) will seldom be considered or acted upon. If they are acted upon – for instance, when the boss is watching – they will be done with a tone of compliance rather than commitment. Sound familiar?

The concerning part for those of us who work to encourage safe employee behaviors is that VABEs operate on semiconscious and subconscious levels and are so much a part of who a person is that the VABEs may only be partially visible or available to him or her. This might explain why people don’t always behave consistently with what they say they believe or value. What is vastly more concerning in high-risk work environments is the fact that, according to data provided in Bruce H. Lipton’s “The Biology of Belief: Unleashing the Power of Consciousness, Matter & Miracles,” the subconscious mind processes information thousands of times faster than the conscious mind does. In essence, by the time the incredibly slow conscious mind has processed information through some logical, often learned process, the subconscious mind has already decided what it will do and may have already started the unsafe action or behavior, potentially leading to another lost-time accident or injury (LTA/LTI). The next time you ask yourself what someone was thinking after they’ve made a poor decision, keep in mind that the person may not have been thinking at all – at least not on a conscious level.

The Danger of Routine Work
I first recognized the significance of above-the-line and below-the-line decision-making after observing the actions and behaviors of utility personnel who worked in high-risk or safety-sensitive occupations during storm season. While these individuals performed during some of the worst possible weather conditions, under higher-than-normal stress and pressure, and often lacked regular breaks and/or sleep, LTAs/LTIs approached zero. This paradox can be easily understood if we first acknowledge that during storm season, there is heightened awareness of risk and a greater emphasis placed on safety by supervisors and co-workers, thereby forcing decision-making from the below-the-line semiconscious or subconscious level to the above-the-line or conscious level. Once decision-making is at the above-the-line level, all safety training – which is frequently developed for the logical, rational and conscious mind – can be fully utilized as it was intended to be.

So, if decision-making isn’t typically a problem for workers during times of crisis, when is it a problem? You guessed it – it’s during those routine times when our awareness isn’t at a high level, when we aren’t experiencing a great amount of stress and there’s no special emphasis on being careful. Statistically, a much greater number of decision-making errors occur on typical workdays. When workers operate on autopilot, they are vulnerable to making those subconscious safety-related decisions that impact whether or not they go home intact.

Allow me to pose another question: If a worker’s most vulnerable time is when he or she is in a normal, routine operating mode, are there some proactive steps that management can take to better prepare and protect workers? The answer is yes, and many organizations have already moved in this direction with encouraging results.

Most safety training, at least up to the early 2000s, focused on above-the-line decision-making, and great gains were made in keeping workers safe. However, we have not made as much progress since, and closing the remaining gap has proven to be a challenge. One possible reason for this is because many safety training initiatives are still focused on above-the-line concerns when all the aforementioned research on VABEs suggests that below-the-line issues might be the real culprit. To put it simply, we won’t fix a below-the-line problem with an above-the-line approach.

Here’s the good news: VABEs can be programmed, and while the process for this is beyond the scope of this article, let me share a valuable nugget that will get you started. Groundbreaking research – which is detailed in a 2014 Scientific American article titled “Good Habits, Bad Habits,” authored by researchers Ann M. Graybiel and Kyle S. Smith – has confirmed that the brain, in an effort to save energy and valuable processing time, can store chunks of neural activity and call upon those chunks from the subconscious when they’re needed, such as in the case of an emergency. The researchers found that with a simple trigger or cue, we can condition our brains to quickly access the right, appropriate and safe chunks. An example of this comes from my good friend Steve, an airline pilot. When I asked him why he uses his vehicle’s turn signal as he’s turning into his driveway on our small, six-home cul-de-sac, even when there are no other cars around, he replied that he doesn’t make important matters “situational.” Steve believes that if he performs the right action every time, regardless of the situation, he won’t forget to do it when it’s important. That’s sage advice, no matter the circumstances.

About the Author: Neil Dempster, CSP, MBA, Ph.D., is a consultant, keynote speaker and trainer. He is the author of several comprehensive training programs that have been delivered to tens of thousands of managers, leaders and employees. With a background in mechanical engineering, a master’s degree in business administration, and a Ph.D. in industrial and organizational psychology, Dempster’s formal education is strategically aligned with what is required to enhance human performance within diverse workplace settings. He can be reached at neil@clearviewperformance.com.