Written by Arthur Seely and Steve Andreas on September 11, 2017. Posted in Worksite Safety. 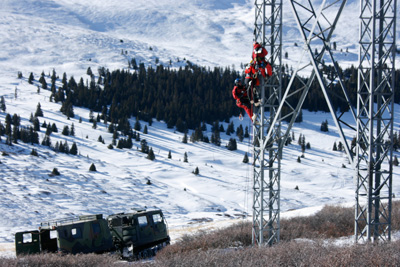 Outdoor workers – including lineworkers and communications technicians – routinely work in hazardous environments. Most of these hazards are well-recognized and understood by the workers and their management, but that is not always the case with cold-weather injuries, such as hypothermia and frostbite. Until workers receive specific and relevant training from medical professionals with cold-weather experience, they may lack the basic understanding of just how suddenly cold weather can kill.

Although there are numerous types of cold-weather injuries, this article will address the most common one: hypothermia, or the human body’s attempt to manage a drop in its core temperature. The core includes the brain, heart, lungs and neck. When managing body core temperatures, keep in mind that more blood flows closer to the skin in the neck than anywhere else in the human body.

Any drop in the temperature of the core blood will trigger a response from the hypothalamus in the brain, which is responsible for all body thermoregulation. The hypothalamus has three separate and unique methods that it will use, in sequence, to respond to a lowered core temperature, referred to as stage 1, stage 2 and stage 3. Failure to recognize the differences between the stages can immediately be fatal to a hypothermia victim.

The Three Stages
Stage 1 hypothermia occurs when the body’s core blood temperature first drops. The hypothalamus initiates two major responses to this temperature drop, only one of which the victim is aware. The first response is the hypothalamus triggering the major muscle groups – those in the arms, legs and face – to shiver. This is mild at first but then progresses to severe and uncontrollable shivering. The second response, which the victim is unaware of, is the brain triggering the release of larger quantities of sugars and insulin into the bloodstream. This is necessary to support the hard muscular work involved in shivering.

The good news is this dual response is effective in reversing the drop in the body’s core temperature approximately 99 percent of the time. Think about this: Have you ever been cold and shivered hard? Are you alive now? That makes you a hypothermia survivor. Well, it makes you a survivor of stage 1 hypothermia anyway. The problem with shivering major muscle groups to produce heat to warm the body is that, as noted above, the activity uses extremely large quantities of sugar and insulin. The body cannot keep up with this rate of sugar and insulin depletion, and thus – if the shivering does not reverse the drop in the body’s core temperature – it must move on to stage 2.

Stage 2 hypothermia begins when the body’s core temperature dips between 92 to 95 degrees Fahrenheit. At this point, the hypothalamus modifies the response mechanism to help ensure survival. The brain’s strategy becomes one of conserving energy and core heat, which results in the slowing and eventual stopping of the shivering response. It attempts to conserve core heat by gradually shutting off circulation to the limbs and extremities, starting with the fingers and toes; this is accomplished by shrinking the blood vessels that supply blood to those extremities. The logic is that this is where the most heat is lost in a cold environment, and by reducing blood flow to the extremities, the body will better be able to retain core heat.

Shunting blood flow to the core has been proven successful unless the hypothermia victim is dehydrated, exhausted, wet or exposed to wind. As the body’s heat loss from the extremities is reduced, the core blood warms up to normal and circulation to the extremities gradually is restored. It is vital that individuals who are with the victim are able to recognize the symptoms of the second stage of hypothermia. Incorrect handling of a stage 2 hypothermia victim can result in sudden cardiac arrest and death of the victim.

Stage 3 hypothermia begins at body core temperatures of around 88 degrees Fahrenheit. The primary difference from the stage 2 victim is that the stage 3 victim is unconscious. Pulse and respiratory rate continue to slow to alarming levels. Some surviving patients had pulse rates of one to two beats per minute and respiratory rates of less than one breath per minute. Records continue to be broken for lowest core temperature to be successfully resuscitated, and survival body core temperatures around 60 degrees Fahrenheit are now common. Almost all hypothermia survival victims recover with no permanent brain damage.

External Heat Warning
It is critical that workers in remote environments – more than 30 minutes from advanced medical care – are able to accurately recognize the symptoms of stage 2 and stage 3 hypothermia. A victim in either of these stages can be killed instantly by a mistake in handling by co-workers.

If a co-worker attempts to assist a victim in the second or third stage of hypothermia by applying any type of external heat to any part of the victim’s extremities, it will trigger an often-fatal response from the hypothalamus. The nerves in the extremity that is warmed will send a signal to the hypothalamus that the environment is now warm. The hypothalamus will then trigger the sudden reopening of previously restricted blood vessels in the victim’s extremities. The result will be the sudden return of the cold and toxin-laden blood from the extremities to the heart. Upon reaching the heart, this cold, toxic blood can trigger an immediately fatal ventricular fibrillation. This type of ventricular fibrillation is referred to as intractable, as it typically does not respond to drugs or defibrillation.

Sudden shocks or jarring also should be avoided while managing a victim with stage 2 or 3 hypothermia. Either occurrence can trigger ventricular fibrillation in the victim.

For remote cold-weather workers without training in the specifics of safe core rewarming techniques, the only available treatment option is to remove the hypothermia victim’s cold, wet clothing and replace it with cold, dry clothing. Carefully transport the patient to safety while avoiding any shocks or jarring and attempting to keep the patient lying flat on his or her back. Without proper training, the risks are too high for an untrained person to attempt anything else.

Heat Loss
Lastly, let’s talk about heat loss. It is important for workers to understand how body heat is lost in a cold-weather environment. Through understanding of the mechanisms of heat transfer, as well as specific actions that can be taken to reduce them, the worker can mitigate these cold-weather hazards.

Conduction
Heat loss occurs through conduction anytime a warm object comes into direct contact with a colder object. A simple example is an individual grabbing a cold metal wrench with his ungloved hand. He immediately loses heat from his hand, which flows into the wrench. Another example is when a fully clothed individual sits directly on snow. The heat in his body will be conducted away and into the snow.

In both cases, the solution is fairly simple. The worker inserts an object – for instance, a glove or ground pad – between himself and the metal wrench or snow, and conductive heat loss is dramatically reduced. The common objects most likely to cause conductive heat loss are those that are most conductive of heat. Prime examples are fluids, which can conduct heat away from the body 25 times faster than air at the same temperature, or metals, which can conduct heat away 17 times faster.

Convection
Convection deals with the heat transfer from a warm, solid object into the surrounding air. Typically it is not a major threat to the worker until you speed up the surrounding air, resulting in what we commonly call wind chill. There are numerous charts and graphs available that estimate the effects of wind chill on the human body. One often overlooked fact, however, is that once the wind speed reaches 40 mph, any further increase in that wind speed causes negligible additional cooling effects.

Evaporation
Evaporative heat loss is poorly understood by untrained workers. Any fluid that is allowed to evaporate off of any surface (e.g., skin, clothing) creates cold. In cold-weather environments, typically we deal with relative humidity factors that are very low relative to warmer temperatures. These low relative humidities in the surrounding cold air accelerate the evaporation process of any fluids exposed to this dry air.

Most workers are familiar with the cooling effects of evaporating sweat on their skin. They can sense this cooling and adjust their clothing to reduce this factor. In a cold-weather environment, the evaporation of sweat from the skin is not the most significant form of evaporative heat loss. Far more significant is the typically undetectable heat loss from the moist surfaces inside the lungs. Fortunately, workers can be trained to wrap common clothing items around their face to greatly reduce this effect.

Radiation
Radiant heat loss often is called “mystery” heat loss. It is most basically described as follows: Any warm object, no matter how well insulated, will constantly radiate its warmth into the surrounding cold environment. The only practical way to control this type of heat loss is to use a mirrored surface, such as a space blanket, to reflect the radiant heat being emitted back toward its source.

Radiant heat loss can be safely ignored during clothing selection due to its relatively minor contribution to overall heat loss while the worker is active and generating ample heat. However, if that worker is forced into a stationary cold-weather survival situation in a truck, snowcat or unheated building, then radiant heat loss becomes much more significant and life threatening. When this happens, properly trained workers can erect a simple “envelope” around their bodies, using space blankets and low-temperature electrical tape. These quickly improvised envelopes have repeatedly proven critical in keeping workers alive in survival situations in unheated spaces.

About the Authors: Arthur Seely is the founder of Safety One Training International Inc. (www.safetyoneinc.com). He has been teaching winter survival medicine and snow vehicle operations full time for more than 30 years, and has authored over 20 articles on these topics. Seely was one of the first paramedics in the U.S., graduating in 1974.

Steve Andreas also contributed to this article. He is a lead snowcat, winter survival and fall protection instructor with Safety One.