Trenching by the Numbers 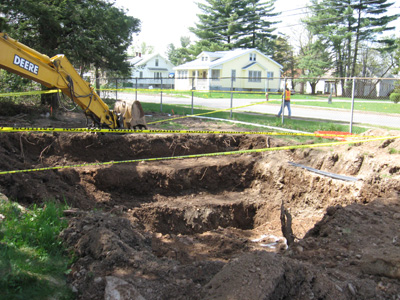 By and large, organizations directly provide the training and other resources needed for the development of their foremen and crew chiefs. Such training tends to be built around two components: following the standards set forth by OSHA and other regulatory agencies, and adhering to organizational policies and procedures.

This is a great approach but perhaps an incomplete one. Truly impactful safety training typically includes a third component: sharing of personal experience. For instance, I once observed a training session in which the instructor drew from his experiences during a discussion about how to troubleshoot problems that can likely be anticipated in the field. Often, this type of training is held in higher regard by trainees than that which simply outlines a standard. Furthermore, workers are more likely to become active participants in training sessions that highlight proven, real-world work practices that they can use to more safely and efficiently execute their tasks.

With this in mind, I began crafting a series of four articles that focus on trenching and excavation techniques and practices. My goal is to present advanced material – injected with my own on-the-job experiences as a safety director and instructor – to the seasoned foremen and crew chiefs who already have some practice working in and around trenching environments.

In this article, the first in the series, I’ll address the OSHA excavations standard and a great way to memorize some of its most important rules, plus I’ll cover a few items that, while not addressed in the standard, must be given due consideration. The second installment of the series will delve into the principles of soil mechanics. In the third article, we will weigh some of the pros and cons of the four major approaches to trenching and shoring. The series will conclude with a discussion of some tricks of the trade that can make the trenching and excavating environment both a safer and more efficient place to work.

Now, with the preliminary information out of the way, let’s get started.

The OSHA Excavations Standard
Found at 29 CFR 1926 Subpart P, the OSHA excavations standard is only about 15 pages long. About two-thirds of the pages are filled with diagrams, tables and images regarding the four primary methods of trenching and excavating. In all, there are only about five pages of actual text.

Here’s an interesting fact: It’s possible to fit all of the major elements of the excavations standard on a single index card. Why would you want to do that? Well, people tend to recall information more easily when there is a system for organizing the information to be remembered. In the case of the excavations standard, measurements are the major points that workers need to remember. For example, they need to be able to recall how deep a trench can be before a protective system is required; the maximum allowable spacing between egress points; and at what depth the competent person needs to consider testing for a hazardous atmosphere. The standard contains all of these measurements, which are designated in feet.

If you are reading this article, there is a good chance you already knew the measurements are designated in feet. So, let’s kick it up a notch and work on an exercise that’s a little more challenging. In the table below are the measurements identified in the OSHA excavations standard. For instance, “2 feet” is mentioned three separate times. See if you can list what the standard requires for each of these measurements:

Except for those individuals who teach this standard regularly, most people don’t achieve 100 percent when attempting the above exercise for the first time. If you didn’t get a perfect score, it doesn’t mean you don’t know your stuff. Rather, it more than likely means that you have never attempted to store and recall this information in this particular way. You probably spot an excavation-related hazard in the field – like spoil piles too close to the trench – and then recall what the standard requires (2 feet from the edge).

Admittedly, remembering the trenching standards in the format posted above does take some practice. But once they are committed to memory using this method, you are much less likely to forget them in the future. If you would like to check your answers and make your own cheat sheet to help with memorization, a copy of the completed table can be found at the end of this article.

Considerations the Standard Doesn’t Cover
I want to take a moment to issue a word of caution to the competent person who oversees the trenching and excavation environment. In addition to the U.S. OSHA standard, there may be other laws and regulations that apply to you and your work sites. Some state plans – such as California’s – may have more stringent requirements than those set forth by federal OSHA. In Canada, there is no national excavations standard. Each province and territory has its own standard, so if you work in one province or several, it is important to ensure you and your crews know the excavation rules and regulations and comply with them.

Following are several other items to keep in mind as well.

Hazardous Atmospheres
The requirements for testing hazardous atmospheres are spelled out in OSHA 29 CFR 1926.651(g). The standard states that testing and controlling the atmosphere in a trench 4 feet in depth or greater must be done if a hazardous atmosphere exists or could reasonably be expected to exist. I have found that very few people are aware of exactly how inclusive a “reasonable expectation” is. Specifically, if you were to dig into the preamble of OSHA’s excavation standard, you would find that the legal rationale details very specific scenarios in which testing and controlling the atmosphere are required based on scope of work, not necessarily condition and location of the trench or excavation relative to a given hazard. For instance, virtually any work activity on a natural gas system requires testing and control.

Notifying Utilities Prior to Excavation
Another legal requirement is to notify utility owners in the vicinity of an excavation prior to beginning the activity. OSHA has its own requirements for this, and the standard also indicates that state and/or local government may have additional requirements that must be adhered to. In addition, plants and other manufacturing facilities may have excavation permitting requirements.

Attractive Nuisances
I have observed on a number of occasions that safety professionals, competent persons and other stakeholders sometimes get tunnel vision when it comes to protecting workers. We sometimes forget that we have an obligation to protect others working in the vicinity of a job site as well as the general public. For instance, excavations near housing developments may create a condition known to the legal community as an “attractive nuisance.” When adults see construction equipment and open trenches, they usually associate those items with work being done in the area and keep their distance. Children, on the other hand, may see this same environment as a playground.

Sadly, many children have lost their lives as a result of playing in unsecured construction areas, causing public outcry in a number of communities and, in some cases, gaining the attention of state legislatures. In response, laws like Massachusetts’ excavation and trench safety regulation (520 CMR 14.00) – more easily remembered as “Jackie’s Law” – have been passed. In the case of Jackie’s Law, excavators are required to take active steps to protect excavations when they are unattended.

Conclusion
As I mentioned earlier, this is the first in a series of four articles written to provide foremen and crew chiefs with an in-depth look at some of the most important elements of trenching and excavation. In this installment, I highlighted the OSHA excavations standard and other important requirements. I invite and encourage you to read the next part of the series, scheduled to be published in the April 2016 issue, in which we will explore the characteristics and behavior of different soil. Until then, stay healthy and stay safe.

About the Author: Jarred O’Dell, CSP, CUSP, is the safety director for Syracuse Utilities and an instructor at Rochester Institute of Technology’s OSHA Education Center. O’Dell has gained 12 years of experience in the construction and utility industries since serving in the U.S. Army. He can be reached at jarred.odell@syracuseutilities.com. 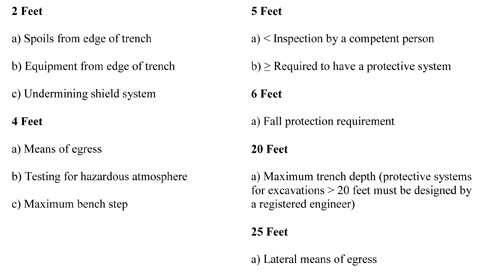