Written by Loralee Pearson on September 19, 2013. Posted in Worksite Safety. 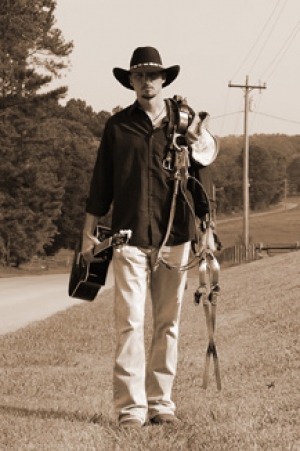 Brandon Wylie grew up with line work in his blood from his father and music in his soul from his grandfather, so it was just a matter of time before the two parts collided. And when you cross line work with a passion for music, you end up with a song that can light up a room and help bring recognition to an entire industry. Wylie wrote the song “Highline Cowboy” to express his love of the electric utility industry, and he can be found working on his music when he’s not teaching safety to lineworkers in his role as a certified safety and training specialist for Electric Cities of Georgia.

But Wylie hasn’t always loved line work. “Being a lineman is not just a job or a paycheck – it’s a lifestyle,” he said. “You live it every day of the year.” That lifestyle frustrated Wylie as a child. His dad would sometimes miss big family events, including holidays and birthdays, to keep the lights on during a storm. Eventually, though, he realized his father’s actions had taught him a strong work ethic that now pushes him to provide for his own family.

Making the Transition
So how exactly did Wylie make the transition from hating his father’s lineworker lifestyle to pursuing the same career? It was primarily through trial and error. He started down a mainstream career path, but realized utility work was in his DNA. Wylie admired his father and wanted to follow in his footsteps, so he blazed a trail into a life that is as strenuous as it is rewarding.

Wylie began his journey as a lineworker around the same time he taught himself to play guitar. It took him about eight years to realize that teaching safety was another one of his passions. While Wylie hasn’t experienced any safety issues of his own, he has lost a couple friends to the dangerous profession.

In addition to being a safety and training specialist with more than 16 years of experience, Wylie is currently a member of the National Utility Training & Safety Education Association and the Georgia Lineman’s Rodeo Association, and also serves as vice chair of the National Association of Journeymen Linemen. He previously served as an APPA Power Lineman’s Competition judge and as master judge for the Georgia Lineman’s Rodeo, and was a competitor in the International Power Lineman’s Competition.

Before serving the different associations, Wylie won the APPA rodeo in 2004 and a second-place finish in 2007. He has seen the industry from all sides and continues to help various organizations with their mission of bringing recognition to lineworkers.

These days, when a big storm hits, Wylie is sent in to fill the general foreman/coordinator role. He said Hurricane Sandy was the most recent major storm he assisted with, stating that it “was the safest storm I ever worked.” He did, however, hear stories of workers who were burned or killed during Sandy.

“We watch each other’s backs because everybody gets tired when working a storm,” he said of his disaster recovery work. Many work 16- to 18-hour shifts for weeks at a time during a storm, and Wylie advises that workers be conscious of their pace and try not to be heroes in dangerous situations. There is an unspoken lineworker bond, and the goal is always to get home safely each night to see your loved ones.

A Source of Inspiration
Storm work was the source of inspiration for Wylie’s song “Highline Cowboy,” which gives much deserved recognition to lineworkers who take risks to put the needs of others before their own. “Linemen work around the clock and many die in the line of duty in order to keep the rest of us comfortable,” he said. “People have become so dependent on electricity that they don’t realize who keeps the power on.”

While on a vacation in Florida, Wylie was thinking about his career and the hurricanes, tornadoes, and ice storms that bring down the lines and put lineworkers in danger. It was then that the words to “Highline Cowboy” popped into his head. Just like a lineman, a cowboy would have to leave his family and spend weeks doing a job in some of the harshest weather conditions in order to provide for his family at home. A cowboy and a lineman both do the work because they have a passion for it, and both face life-threatening risks, not knowing what they might encounter each day. “The song literally wrote itself in five minutes,” Wylie said. “There may be better songs lyrically and musically, but this one came from God and a lineman.”

His grandfather, who was inducted into the Atlanta Country Music Hall of Fame as a mandolin player, would be proud of his grandson’s passions. Wylie enjoys writing more serious songs that pull at the heartstrings, and he is a country music performer at heart. Being part of the utility industry has allowed him the opportunity to play his music at various lineworker rodeos and conventions. His song also is featured in “Storm Soldiers” (www.stormsoldiersmovie.com), a new industry film that pays tribute to lineworkers across the country.

With a wife and a 9-year-old son at home, Wylie knows firsthand how difficult the line career is on families. He’s always trying to practice what he teaches when it comes to safety on the job. “Your family expects you to come home,” he said. Wylie’s father is his hero and role model, and he hopes his son might carry the same lineworker passion in his DNA.

“He loves the music, but he’s not into line work yet,” Wylie said. “I would definitely recommend this career to my son.”

About the Author: Loralee Pearson is a freelance writer. Prior to freelancing, she worked for Huskie Tools for 20 years in various roles including marketing manager, human resources manager, chief operating officer and president.