The Roller-Coaster Life Cycle of IEEE 1307 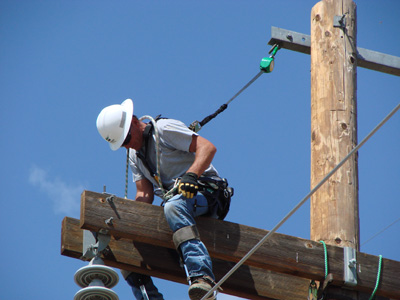 IEEE 1307 is a little-known work group that is part of a larger IEEE subcommittee known as ESMOL, which stands for Engineering in the Safety, Maintenance and Operation of Lines. Both IEEE 1307 and ESMOL fall under the umbrella of the IEEE Transmission and Distribution Committee. IEEE 1307 is also the title of a utility fall protection consensus standard that has existed since the early 1990s. In light of the recent OSHA changes to fall protection, it seems appropriate to spread the knowledge about this industry standard.

In the Beginning
In the early 1990s it became apparent that falls were one of the leading causes of injury and death in electric utilities. I’m not 100 percent sure how the ESMOL committee became involved with IEEE 1307, but I do know that in the early stages of the consensus standard, drop tests at various utilities were conducted and documented, and calculations and guidelines were developed. IEEE 1307 proved to be a great asset for utilities in the development of fall protection programs. Over the next 15 years or so, IEEE 1307 essentially went into maintenance mode, with only minor changes taking place over the years, but it still gave good guidance for utility fall protection programs.

Time for an Update
The IEEE 1307 work group is comprised of utility representatives, contractors and consultants, and an OSHA representative will sit in when available. For informational purposes, many of these work group participants also represent themselves or employers at meetings of NESC Subcommittee 8 and various other utility groups such as Edison Electric Institute (EEI) and the Southeast Power Exchange. One would think that, with all this cross-pollination of participants, the recent major changes to OSHA’s fall protection standards would have been revealed prior to the official release of the revised rules. This did not occur.

In 2011 the work group began to make major changes to the IEEE 1307 fall protection standard to align content with the purpose and scope of the then-current OSHA standard. A lot of hard work and dedication went into the revisions, and in 2013 the new IEEE 1307 was put into the balloting process for approval. For those not aware, the development, adoption and publication of a consensus standard is a very slow process that takes years to accomplish, and our group was proud of how efficiently we developed our new standard and got it up for ballot.

Let’s fast-forward to the release of the 2014 OSHA standards. A key point to the fall of IEEE 1307 is that it still allowed a climber to free climb with the stipulation that, at times, the climber would need to be 100 percent attached. In the preamble of the 2014 OSHA standards release, OSHA referred to IEEE 1307 as a good reference document, but stated that they wouldn’t adopt it as an official reference document for fall protection because it allowed for free climbing. The new OSHA standards dictate that climbers shall be attached at all times except in very rare cases. The employer must determine when these rare cases are allowed, such as when being attached is more of a hazard than not being attached. The employer that makes these decisions has an enormous responsibility, and my guess is that this rare-cases clause will rarely be used.

Getting back to IEEE 1307, talk about a knife through the heart. All that hard work and pride were left on the table, and the work group had no choice but to remove the newly developed standard from the ballot. At the time of the OSHA release, it appeared that IEEE 1307 may have outlived its need and may possibly just go away. After all, who needs guidance for something spelled out so clearly in the OSHA regulations?

Back to the Drawing Board
Once the shock of such far-reaching changes to climbing for utility workers was over, a vote was held at the 2014 IEEE summer meeting in Washington, D.C., regarding whether IEEE 1307 would be rewritten or forever shelved. To my surprise, popular opinion and the straw vote of the participants were overwhelmingly in favor of going back to the drawing board and keeping the standard alive. The plan is for work group members to once again work together diligently to bring IEEE 1307 in line with OSHA, providing useful information and guidelines to help utilities develop and maintain state-of-the-art fall protection programs. The first work group meeting was held the first week of December 2014. The ESMOL group met at the Winter Power Meeting in California the first part of January, where attendees reviewed and commented on IEEE 1307, bringing the document closer to completion. The goal is to have a standard ready for ballot and in the hands of those who want it by 2016.

Current Activity
At the time I’m writing this article, there is activity between EEI and OSHA to help flesh out many of the questions raised by the new OSHA regulations. I’m fairly confident that one of the issues being addressed is how to set up a properly rated anchorage that meets the 5,000-pound static load requirement for fall arrest on legacy steel lattice structures. These structures were never designed with fall arrest anchorages in mind, and as a climber, one must know where to rig because some steel is under tension while other steel is under compression. A fall onto a member under the wrong stresses can have dire consequences if too much force is applied at the wrong spot. Some legacy lattice structures are made of such lightweight steel that obtaining a 300-pound anchorage for positioning is questionable.

Other issues of concern are large steel and concrete poles. These structures are large in diameter, and the typical pole choker-style positioning strap cannot be used. This leaves the pole step as the only place to which to anchor, and we don’t know if it will hold you if you fall.

Hopefully guidance will be forthcoming to help us determine possible solutions to these and other issues created by the latest OSHA regulations. I believe that things will move fast, and in fact, information may be available prior to the printing of this article. Sitting here with my crystal ball – which, by the way, is usually broken – my prediction is that any clarification on fall protection issues will come through interpretation letters and compliance directives. What it comes down to is having an engineer study your specific structure type for the most appropriate anchorage. An engineered anchorage only has to be rated for a 3,600-pound static load instead of 5,000 pounds.

Conclusion
For those involved in trying to bring their fall protection programs into compliance by OSHA’s deadline, know that it’s not as easy as waving a magic wand. Equipment manufacturers are in full swing to develop new products to help climbers comply. Employers are busy putting together committees to figure out how to comply. Rest assured that the IEEE 1307 work group is going to work hard and fast to deliver a product that will help guide the future of keeping climbers safe while remaining attached at all times.

It is my best guess that before full compliance, an ongoing process will take place in which equipment manufacturers take the lead in developing easier-to-use equipment, climbing procedures are constantly adjusted to allow for productivity and, most importantly, falls from heights become a thing of the past. We must keep in mind that both our goal and OSHA’s goal is to ensure that no one hits the ground in the event of a fall, although all of us prefer that a fall doesn’t occur in the first place. As we move forward, staying mindful of this goal will help us to keep our minds in the game and our eyes on the ball.

About the Author: Ed Hunt, CUSP, is a foreman III lineman for Western Area Power Administration. He began his line trade career with the City of Longmont, Colo., in 1983, and then went to work for WAPA in 1992. He represents the administration on the IEEE ESMOL committee, NESC Subcommittee 8 and EPRI Live Working Task Force. Hunt is also active on many internal WAPA committees, with an emphasis on safety.

Editor’s Note: For more information and updates about IEEE 1307, readers can visit http://ieee-sa.centraldesktop.com/esmolpublic/.