The Road to an Innovative, Award-Winning Safety Program 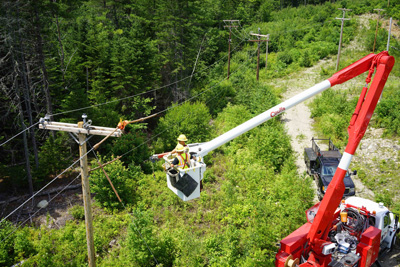 Monday mornings at Coutts Bros. – an electrical line construction and maintenance contractor – begin the same way they have for more than 50 years. The crew meets on the old Coutts family property in Randolph, Maine, before 6 a.m., coffee and lunchboxes in hand, wearing shirts and hats that sport a variety of company logos from the last few decades. Conversations are lighthearted; depending on the season, discussions range from the weekend’s Red Sox, Bruins or Patriots game to embellished fishing and hunting stories, complete with cellphone pictures to prove the tales are mostly true.

This family atmosphere has been at the heart of the company since it was incorporated in 1963 by the first generation of Coutts brothers, Stan and Bill, who initially ran the business out of their family barn – which is still in use as a garage – using a John Deere tractor. The company got their first taste of utility work when the brothers began using the tractor to haul, dig and set poles for the local power company. Eventually the tractor was upgraded to a bulldozer, and today Coutts Bros. manages a fleet of excavators, bucket trucks and assorted equipment used for utility maintenance and construction projects.

Safety Program Evolution
Throughout the years Coutts Bros. has been in business, their processes have evolved considerably, primarily with regard to safety. Those early morning conversations are cut short when a crew member sees that the clock has struck 6 a.m. – this means it’s time to stretch. “Chin tuck!” is shouted from inside the garage, and 30 heads drop with a thumb to their chins. The stretching program is one of many safety initiatives that Coutts Bros. launched three years ago as part of a comprehensive safety-focused effort.

“A morning stretch gets some oxygen in the blood, gets your body ready for work, and has been proven to reduce soft tissue and repetitive motion injuries,” said Jared Rossignol, the company’s safety director.

Though the stretching routine has become habit for Coutts Bros. employees, and Rossignol is now a regular fixture on the contractor’s job sites, both are relatively new additions to the third-generation family business.

Like many construction companies that succeeded in the 1970s and 1980s, the foundation of the business was hard work and tough employees. Over the years, Coutts Bros. earned a reputation completing difficult projects, regardless of what it took to get the job done. In the 1990s, the contractor’s employees earned the nickname “The Can-Do Crew” from a local newspaper due to their efforts during an ice storm that left most of Maine without power. But as the company grew and the construction industry continued to evolve, Coutts Bros. recognized that it was time to adjust their approach to safety.

“Not only do clients require our safety record and a safety plan for every project we bid on, the entire construction industry has been shifting the focus to safety as a first priority,” Rossignol said. “Coutts Bros. was passionate about being at the forefront of this effort.”

The company began their safety effort by hiring Rossignol as safety director. They also changed the way employees are trained by introducing a behavior-based process; underwent a safety training and evaluation process through Associated Builders and Contractors; and invested in unmanned aerial systems for high-voltage asset inspection, a move that is discussed in more depth later in this article. As a result of these efforts, Coutts Bros. was recently one of 12 companies to receive a National Safety Merit Award from Associated Builders and Contractors.

“We wanted to be clear to our employees that there is one thing that is more important than getting the job done: Everyone needs to go home in the same shape, equally as healthy or better than they were when they came in that morning,” said Scott Coutts, line superintendent.

As part of the third generation of Coutts Bros., Scott and his cousin Dylan Coutts have built a training facility and implemented a company apprenticeship program as part of their commitment to all employees.

“When we asked the guys how we could improve, they asked for a more formal training program,” Rossignol explained. “They also wanted a more formalized drug-free policy.”

Coutts Bros. quickly responded to both requests, joining the Construction Coalition for a Drug- and Alcohol-Free Workplace and developing a lineworker apprenticeship program approved by the University of Maine System and the U.S. Department of Veterans Affairs.

Addressing Challenges
The road to a successful safety program isn’t without bumps, and Coutts Bros. has certainly hit their fair share. As the company worked to shift their safety culture via the implementation of new initiatives, employee turnover surfaced as one of those bumps.

“Not everyone fit,” explained Scott Coutts. But, he said, “We’ve got a great group of people now, where everyone is on the same page. The crew has a ton of experience, and the guys all know everyone is looking out for each other.”

Cognitive bias is another challenge Coutts Bros. has strived to overcome. As many construction companies well know, this type of bias – whereby a person perceives the world based on his subjective experiences and makes decisions in an illogical fashion – is one of the greatest barriers to a progressive safety program. For instance, it can be difficult to convince an experienced worker to perform a specific task using an updated, more efficient method when he has been performing that task the same way for years with no negative results.

But at Coutts Bros., the company’s management, as well as the rest of the staff, is committed to doing things the best, safest way possible.

“It doesn’t matter if it’s the old way, the new way, the Coutts’ way or a practice we’ve learned from a client or competitor,” Scott Coutts said. “If it’s the best way to complete the task, that’s how we’re going to do it.”

An Investment in Safety Innovation
As referenced earlier, Coutts Bros. has invested time, money and other resources into unmanned aerial systems (UAS), often referred to as drones. The contractor inspects 6,000 to 10,000 transmission structures annually, most of which are climbed by lineworkers. However, each year there are a number of structures that lineworkers do not climb due to various safety concerns, including clearance requirements, deteriorated assets and even stinging insects. A UAS enables Coutts Bros. employees to perform visual inspections of these and other structures and shoot high-definition photographs from just yards away, making them far superior to ground inspections and those done via helicopter patrol. Additionally, because they do not have to climb any structures or utilize a helicopter, UAS operators are typically in a low-risk environment for the duration of an inspection.

As part of their commitment to safety, Coutts Bros. makes every effort to use the best equipment available on the market. The contractor uses certified forward-looking infrared – or FLIR – cameras on each of their unmanned aerial systems, and they work with qualified thermographers to handle the data as well as each UAS. Coutts Bros. also employs cameras with extremely high megapixel counts to negate the need for optical or digital zoom. High-megapixel cameras collect a tremendous amount of data that can be viewed in great detail. The degree of detail is such that an image captured from yards away can be viewed close enough in post-processing to see the condition of a cotter pin. With this capability, Coutts Bros. has detected cracked insulators, missing cotter pins, burning and pitting marks, and wire fray on transmission structures and in substations.

In closing, Coutts Bros. sees the results of their safety efforts every day in the actions and attitudes of their employees, in the results they have been able to achieve through the use of unmanned aerial systems and in their industry reputation. The company is proof that even a small utility contractor in New England can successfully change their safety culture and become known as an industry leader.

About the Authors: Brad Stout is the general manager of Coutts Bros. (www.couttsbros.com), a Maine-based utility contractor that provides electrical construction and maintenance services to utilities, municipalities, cooperatives and private sector companies throughout the Northeast. The family-owned business of 45 employees constructs and maintains substations, distribution systems and transmission infrastructure to 345 kV.

Jesse Gibbon is an unmanned aerial system and helicopter pilot at Coutts Bros., responsible for ensuring all aircraft are operated in a safe manner.