The Authority to Stop Work

Written by Bart Castle on June 21, 2013. Posted in Safety Management. 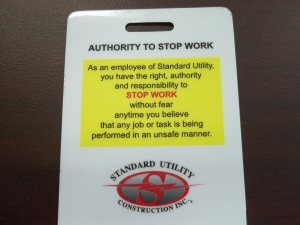 Since its founding in 1984 as an electric utility contractor company, co-founder Steve Standish has always considered Standard Utility Construction an organization concerned about safety. Specifically, Standard responded to a fatality in 2003 by developing formal safety processes and documents. These included assigning employees to full-time safety-related work; increased emphasis and time devoted to safety meetings and incident response; deepened training and even more extensive use of appropriate PPE, often before an item was formally required by regulation; working toward formal OSHA certifications for Standard’s safety efforts; and a review to make certain all company documents regarding safety contained language emphasizing that no employee had to complete work he or she believed was unsafe.

In essence, Standard had an effective safety culture. Or did it?

In January 2012, the in-depth analysis of an incident that left an employee seriously injured prompted Standish and senior leaders to conclude – regardless of their feelings about the time, effort and money spent since 2003 developing what they felt was an effective safety culture – that all facts indicated the Standard safety culture was not as safe as it could be.

Thoughtful consideration of the facts prompted senior leaders to conclude that the concept of “Git’r Done” was more clearly understood and familiar than the idea that every job, in every circumstance by every employee at every level, is to be done at the highest level of safety – period. While Git’r Done had been an old friend at Standard and in the industry as a whole, it was time to either give Git’r Done a significant makeover or boot it out of the organization entirely.

An Unexpected Discovery
Standard’s leaders decided that Git’r Done could stay on the condition that it be given a full makeover. Exactly how to complete the makeover was a significant question facing the company’s executives, and the answer was unexpectedly discovered while a Standard employee was speaking about completion of stage one of the OSHA Challenge – a cooperative program that provides employers and workers the opportunity to gain assistance in improving their safety and health management systems – with Ralph Riley, safety program manager for S & B Engineers and Constructors Ltd., Standard’s OSHA Challenge administrator.

The Standard employee noticed a card on the corner of Riley’s desk that authorized and obligated employees to stop work if they believed the work was unsafe. The card bore the signature of James Slaughter, S & B president.

“Mr. Slaughter distributed the first cards to employees in the field himself,” Beaver continued. “We work hard to make certain employees have the training, resources and time necessary to get the job done safely. Here at S & B we have the data to prove that the time taken to plan work safely prevents injuries, saves lives and is effective financially. In analyzing data the year prior to the card’s introduction, we found that 72 percent of our incidents involving injuries occurred during rework. The idea that safety and production are not compatible is not true, at least not for us.”

In discussing the challenges found when changing a construction culture, Beaver suggested that changing the old “production at any cost” culture typical in construction required proving to employees that management – including executives at the very top of the organization – would support employees who stopped work if it appeared unsafe. “Mr. Slaughter believes in servant leadership,” Beaver said. “As such, if we have an incident, we ask first, ‘What could we as leaders and managers have provided to this employee to have potentially prevented this incident?’ We did, and do, a great deal of coaching after an incident occurred. Constant communication is one of the big keys to having the card program remain effective.”

Card Introduction and Challenges
The Authority to Stop Work card was first introduced to Standard Utility operations managers, and then to all employees at the quarterly safety stand-downs in May 2012. Standish said he believed the idea “was the critical next step in the evolution of Standard’s safety culture.”

Standish also felt several specific challenges would occur while changing the culture at Standard. These included:
• A 20+-year practice of Git’r Done at Standard, which in many cases meant that production trumped safe work practices.
• Industry practice that mirrored Standard’s own practice of influencing employees to believe what happened within the crew stayed within the crew, which endangered the whole crew.
• Implementation of other programs that were not effectively followed through with in the past.
• Convincing employees that they would be protected from management retaliation if they stopped work.
• Getting managers used to the idea that any employee at any level could – and should – stop jobs for reasons that might have been common practice in the past, but were unsafe.
• Helping all employees understand that the implementation would likely involve mistakes, miscommunication and challenges, none of which meant the program would be scrapped.

Since the card’s introduction, all of these challenges have presented themselves. However, Standard’s senior leaders, including Greg Pinkerton, director of operations, insist the program means every employee should come to work at Standard confident he or she will go home exactly as he or she arrived – in one piece no matter the job performed.

Both Gary Sides, one of Standard’s earliest employees who now serves as a regional manager, and Keith DeMarco, a serviceman with more than 20 years of industry experience, believe the Authority to Stop Work process is good, but a very different way of thinking than they were used to given that Git’r Done has long been commonplace throughout the industry, including at Standard. Since the stop-work process was introduced, both men believe real progress has been and continues to be made. DeMarco suggested that working safely may be one area where employees with less time in the industry are leading the way.

First Stop-Work Event
Standard’s first work stoppage may at least partially bear out DeMarco’s thinking. The event occurred when Eric Canales, a four-year Standard employee, stopped a job during which conduit needed to be pulled in alongside work being done on a new residential home. Though working with an employee with 20+ years of service who believed the job to be safe, and initially getting resistance from his foreman, Canales chose to exercise his authority to stop the work. “My co-worker had a family and it was part of my job to see we both went home safely. That is why I stopped it,” Canales stated, when asked what prompted him to be the first to use the card at Standard.

Both Canales and his foreman, Scott Parvin, who initially suggested he go forward without stopping, said they learned something valuable from the stop. Parvin, initially skeptical about the Authority to Stop Work process, increased his trust in employees’ ability to discern hazards versus simply stopping unpleasant jobs. Canales’ respect for Parvin grew in the weeks and months following the stoppage as he witnessed that Parvin showed no signs of anger or other ill will toward him. Instead, Parvin chose to commend Canales for choosing not to work in a situation he felt was unsafe.

Though much remains to be done before the introduction of its Authority to Stop Work card can be deemed to have entirely changed the game, Standard is confident change has begun and will persist until Git’r Done is completely remade. “Our employees are worth every bit of the effort it takes. People they love count on them to come home,” Standish said.

Recently Standard learned that the Authority to Stop Work program has been adopted by the largest electric utility for which Standard does contractor work. Standard leaders are hopeful that in years to come, a dramatically made-over Git’r Done will mean lights burning, new services installed and everyone at electric utilities large and small going safely home to their families each night.

About the Author: Bart Castle is the director of risk management, safety and training for Standard Utility Construction. He has been involved in those fields for 20+ years; 10 of them have included work in the electric utility industry.