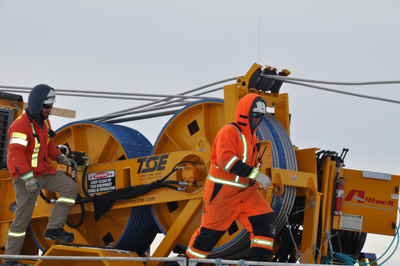 When you ask lineworkers what differentiates their work from general construction, it’s not surprising that they will typically say they work with big lines at high voltages. Lineworkers take pride in keeping lines up and fixing them when they come down. We know that lines do come down inadvertently, and we also know that the losses resulting from such incidents can be substantial. No amount of regulation will combat these problems, so that’s where best practices come into play. Best practices establish the most common methods to achieve operational success within the parameters of regulations, provide work techniques inclusive of the collective trade experience and debunk field-level work practices that counter those efforts.

Each year thousands of miles are strung, and many lineworkers have likely wondered how many lines have dropped due to misaligned or misapplied practices. In fact, we asked this same question at Allteck, which prompted research into the matter; our goal was to compile the best working knowledge about some stringing problems commonly encountered by workers in the field. The prevention strategies regarding this topic appeared limited, and most stringing information related to post-incident countermeasures, such as the bonded and grounded stringing site.

One issue that produced considerable debate during the initial portion of our research was the application of mesh grips – also referred to as “pulling socks” – versus preforms. Despite the fact that preform grip manufacturers roundly prohibit preforms for overhead pulling, the grips are commonly used in pulling applications. We received comments from seasoned line veterans in both Canada and the U.S. indicating there are a wide variety of application practices. Some of these practices are based on experience, while others continue to be used simply because that’s how certain companies and workers have always done it.

In an attempt to meet our goal of investigating stringing-related issues and common practices, last year we decided to conduct our own version of Discovery Channel’s “MythBusters.” Following is a summary of our findings.

The Problem With Mesh Grips
Evidence suggests that pulling grips most often fail when they are used to pull shield wire. It was assumed that the reason this occurs is because conductor surface is comprised of aluminum while shield wire is steel. The friction coefficient of the metal mesh on the softer aluminum conductor surface is greater than on the hard steel, and the tension at which the grip mesh penetrates the surface of the steel is much greater than the tension required to penetrate the aluminum.

During testing performed by British Columbia-based Powertech Labs, a properly selected mesh grip started to pull off from a steel shield wire at 1,500 pounds. The grip did not have two bands installed at its tail end per the manufacturer’s specifications. This test also simulated the bands being applied to the grip, but without adequate force to tightly secure them in place. When the grip was installed using the proper force to apply the bands, the same grip that had slipped then held to near full-breaking strength of 10,000 pounds. Lab testing verified the critical role played by two PUNCH-LOK bands properly applied to the tail end of a properly selected mesh grip.

Note that small-diameter steel shield wires – three-eighths of an inch to a half-inch – require the use of smaller three-eighths-inch-wide bands, fully tightened with a smaller tool. On the smaller strand, the width of the larger PUNCH-LOK band is greater than the width of the strand. It is the width of the buckle on the half-inch or five-eighths-inch band that keeps it from snugging uniformly tight over the grip. The bands prevent wiping off the grip when used back to back through a traveler or in cases where the wire may be reversed into a traveler. The tail-hold also provided by the two PUNCH-LOK bands draws the tail of the grip with the conductor under tension, promoting compression in the mesh and gripping force on the wire.

The Problem With Preforms
Using preforms in place of mesh grips is common, most likely because they are readily available. There are, however, a number of anecdotal failures associated with their use, although many industry professionals have reported that preforms have successfully been used for both conductor and shield wire stringing.

During the lab testing performed by Powertech, shield wire was rigged with a manufactured grip and bands at one end, and then secured with a preform on the other end as an anchor point. In several tests, the tail end of the preform began to unravel. In one test in particular, the tail end unraveled so much that the test was terminated prior to full tension. The mesh grip, however, held in place.

Rotational forces during stringing increase the risk of preform failure as well, even if in-line swivels are installed. Preforms are stiff by design and handle poorly on travelers and angles.

There is another important issue with preforms that will increase the probability of failure when used as a pulling grip. The failure risk is associated with distortion of the eye on the installed preform. The through-bolt in a swivel is not the same diameter/radius of an anchor eye that the preform is designed to be anchored against. Under strain against the swivel bolt, the preform eye will stretch and deform. As the eye distorts, the parallel asymmetry of the gripping strands is disturbed so that all of the strands split. The strands are then no longer in uniform contact against each other, and they are not in uniform contact with the strand or conductor. When they become misaligned, the holding strength rapidly diminishes until it fails.

It is important here to repeat that preforms are designed as a unit of material in a guy assembly and are not manufacturer-approved to be used as tools for stringing applications. These types of failures may complicate insurance claims. If you intend to use a preform in a pulling application for any reason, the pull details should be examined and approved by an engineer.

Critical Best Practice Items
Based on what we learned through research and lab testing, we devised this list of critical best practice items that we hope will help other companies work both more productively and safely.
• The proper size grip must be selected. Try to select a size that will fit within the midrange of the material to be pulled. Grips are also designed for other applications, such as conductors, shield/guy wire and rope. Consult manufacturer specifications for the best fit.
• Band application must be done properly, and two bands must be applied – one an inch from the tail end and the second another inch beside it. The bands must be secured in position with the proper punch or they will not hold correctly. Using more than two bands or installing them farther along the grip is not permitted as it lessens gripping action. Band size and the tension applied are also very important.
• Apply a layer of tape to the end of the grip that overlaps onto the wire. This protects the end of the grip from fanning out while going through travelers.
• An in-line swivel must be installed between the grip and the pulling line. This greatly reduces rotational forces.
• Rigging tension must maintain a safe 5:1 ratio for all components.
• Final sag is not permitted because this introduces exponential tension factors, damaging many components and leading to overload failure conditions.

In addition to the practices noted above, following are several more items for consideration.
• Select your tools and equipment wisely. Offshore manufacturers can be less expensive, but their products may lack testing and documentation. Ensure the specifications of the grip relate directly to the type of wire or rope being used.
• Consider using friction tape on wire of five strands or less, or on hard-drawn copper that has minimal surface contact between the grip and the wire. Friction tape is soft, pliable and sticky, much like hockey tape. Apply it to the surface of the wire where the grip will be installed. One layer should slightly overlap, which helps hold the grip in place by adding additional friction.
• While stringing during subzero weather, slightly heat the wire with a torch to remove any superficial frost prior to applying the grip or friction tape.

Benefits of Best Practices
Industry best practices are methods that, when applied in real-world scenarios, have proven to be more operationally effective than other techniques. In the electric utility industry, safety is one of the greatest benefits derived from best practices. Another benefit is that – unlike OSHA and other regulations – best practices offer a level of flexibility; they are continually changing as new information and technologies are brought to the table. In the spirit of staying abreast of industry changes and evolving best practices, questions and comments about the topics discussed in this article are welcomed and encouraged.

About the Author: Chris Grajek, CRSP, CUSP, has been Allteck’s director of health and safety since 2006. He leads a team of trades trainers and field safety coordinators for local and international construction and maintenance activities. Grajek is also involved with a number of transmission and distribution partnership task teams and provides instruction on a wide range of utility-driven training initiatives. He can be reached at cgrajek@allteck.ca.

Chris Grajek, CRSP, CUSP, has been Allteck’s director of health and safety since 2006. He leads a team of trades trainers and field safety coordinators for local and international construction and maintenance activities. Grajek is also involved with a number of transmission and distribution partnership task teams and provides instruction on a wide range of utility-driven training initiatives. He can be reached at cgrajek@allteck.ca.