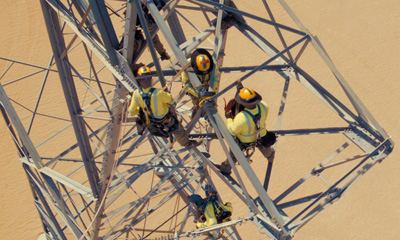 Rope has always been at the core of many operations and is the principal means of removing an injured person from a structure or manhole. In recent years, labor laws have revised and expanded expectations, particularly for worker fall protection on towers. The quest for methods to accommodate these rules has created opportunities for new applications of rope techniques, introducing wider use of rope access and rope descent technologies into the line industry.

Rope access describes rope-use techniques that have evolved from centuries-old rope applications incorporating maritime, construction and, in particular, mountain climbing or controlled descent methods. In the firefighting world, rescue using rope is referred to as “high-angle” or “technical” rescue. Rope access has been used for centuries in construction, and most readers today are familiar with scenes of lumberjacks, wind energy blade inspections, and dam and bridge inspectors suspended over the sides of structures.

In the line trade, we traditionally think of rope in terms of its use as a handline, which, in the event of an emergency, doubles as a rescue line. This rescue technique is still as relevant now as it was in the late 19th century, as the idea to plan your rescues is not a new one. Any differences between rope rescue today and rope rescue in the early days of power lines are primarily due to technological advances. One example of these advances is Buckingham Manufacturing Co.’s OX BLOCK, which is used for hurt-man rescue and self-rescue, as well as lowering, raising and snubbing loads.

To the employer researching rope access and controlled descent techniques for workers, it is important that line personnel be involved in the research process so that the techniques, tools and training that are adopted effectively match the needs of the workplace. Keep in mind that rope access is not a substitute for all work tasks – it is simply another tool. Both training and research are critical for employers and employees considering rope access techniques; this includes the review and assessment of tools and other items currently available on the market, including rescue-rated blocks and property-rated handlines.

Differences and Benefits
There are a few distinct characteristics that separate modern rope access from what was used in the early days of the line trade. First and foremost is the two-rope system. A typical two-rope system consists of a main or working line run next to a backup line. Two-rope systems provide a greater margin of safety and utility as the second line is there purely as a safety or rescue line. Any single failure of a carabiner or device on the main line will not cause a catastrophic system failure. If an incident or need for assistance arises, the second line is available and can easily be rigged by rescuers for a path to the injured and a means to lower a worker to the ground. On the tower, workers have a compact bag of rigging components. With training and practice, rescuers will have everything necessary for any rescue scenario from anywhere on the tower.

A benefit of rope access use on large lattice structures – and one that often is overlooked – is that a reduced amount of effort is required to climb a transmission structure. The most popular rope access technique used today involves sending a first worker up who ultimately sets the safety lines from which the rest of the crew will work.

Depending on which first-worker system is employed, there will be a minimum of 50 rigging connections to reach the top of a 300-foot tower. This scenario is unavoidable for the first worker, but once the vertical lifeline is set, the rest of the crew can get from the bottom to the top of the tower with two or three connections at transition points where a redirect sling has to be relocated. This method of tower access – in which one worker sets the anchor and backup lines – can significantly reduce the potential for crew error.

Setting the Line
There are a couple of criteria that must be taken into consideration when setting the line. First, the rope must follow the climbing path up the step bolts, so a redirect, composed of a sling and carabiner, must be added at the waist of the structure as the layback begins. Second, minimum approach distances must be considered, especially when crews are working on windy days or when storms may occur. To keep the lifeline from blowing around, redirect slings should be added at the same height as phases, and the bottom of the rope should either be weighted or, more commonly, clove-hitched to the bottom step bolt.

The primary difference between the line trade and other trades that use rope access is the use of capstan hoists to lift personnel. Many other trades generally do not have groundmen and equipment operators who are trusted members of the regular crew. The technological advancement that allows for the use of a capstan hoist for life safety is a product called a multipurpose device, or MPD. Traditionally, capstan hoist manufacturers and regulators did not allow hoisting of personnel because the drum on the hoist did not capture the lifeline. The hoist operator had to keep tension on the hoist line to keep the system engaged. The MPD is used in series as a redirect pulley between the capstan and the man being hoisted. Having a progress capture in the system means that even in the event of a capstan failure, the system will remain secure and life-rated. This tool has two key functions. First, it employs the use of a one-way pulley that maintains 90 percent efficiency compared to a traditional assisted-braking descender. Second, it can be used as a lowering device for a two-person load. As an added bonus, this configuration pre-rigs the system to lower so that the device can be used to rescue a hurt worker from the work location to the ground. To execute this style of retrieval, the groundman simply operates the handle of the MPD and lowers the worker in a controlled manner. This eliminates the need to put another lineworker in a hazardous situation, allows for expedient rescue and keeps the rescuer fresh to deal with any medical concerns that may arise.

An Alternate Method
Although rope access allows for quick and convenient access to remote locations, can reduce the likelihood of a climbing-related incident and offers a way to promptly rescue hurt workers, it may not be ideal for every situation. This is especially true when leverage or stability is required. Thus, rope access should be considered an alternate method to reach a worksite. And, as with any life-safety process, it’s important to make sure your team is properly trained before conducting operations.

As with any working techniques, structural stability must be verified. The forces exerted on a transmission tower during the use of rope access may not create any safety issues, but it is possible they can be exerted in directions the tower designers were not expecting. Consult the professional engineer of record for the structures you plan to work on.

About the Author: Brian Bourquin is director of training for Safety One Training International (www.safetyoneinc.com). He can be reached at brian.bourquin@safetyoneinc.com.