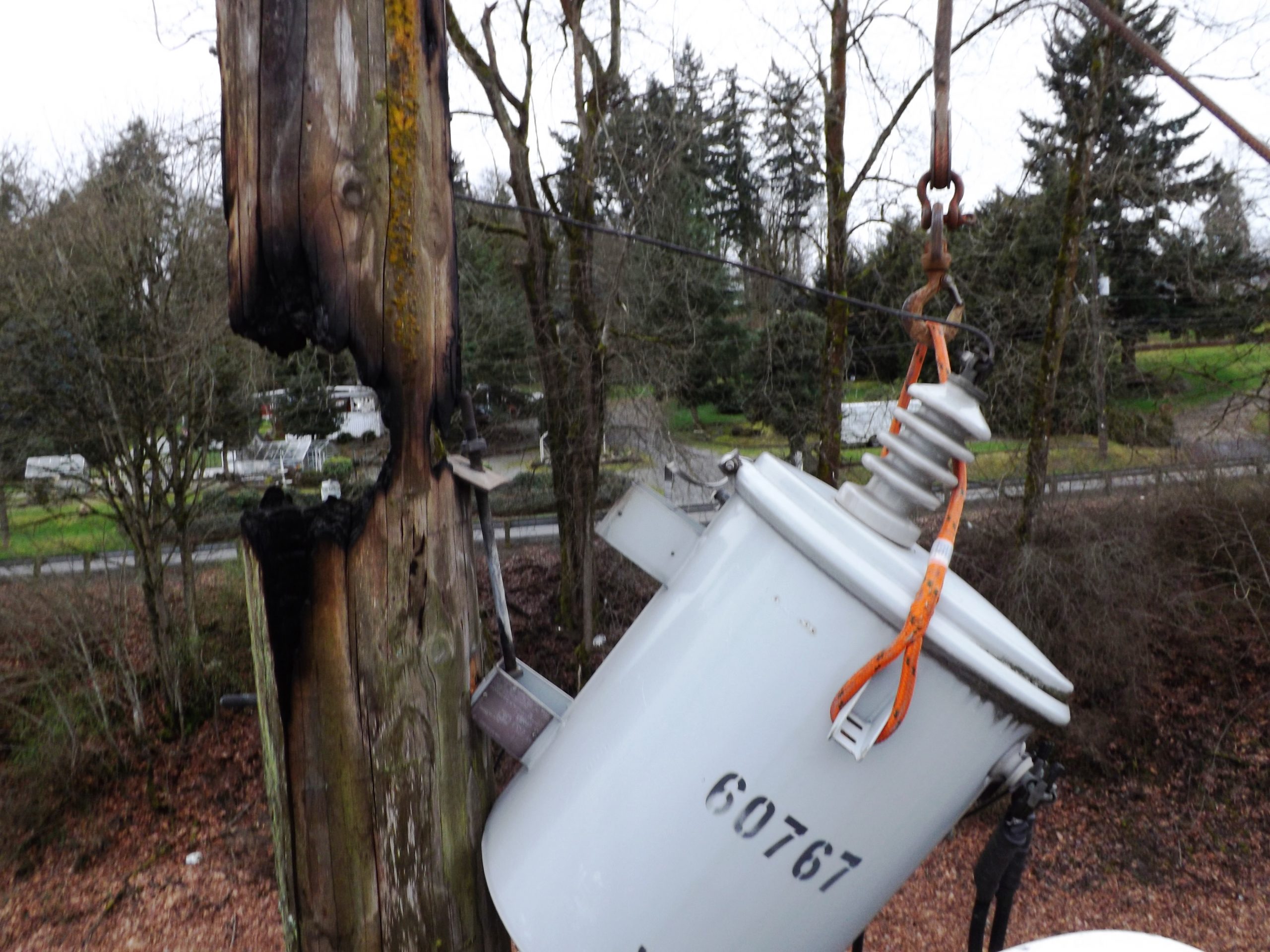 From time to time, most utilities with high-voltage systems have to deal with the problem of pole fires. While causes vary, fires always affect system reliability by damaging facilities and resulting in outages. Worse, it is hard to define the risk to workers dealing with a pole fire, especially when the fire’s cause is not easily determined.

The most common cause of pole fires on Tacoma Power’s electrical system is high-voltage current tracking across insulators and finding a path to ground. This tracking can build heat and result in a fire within the wood pole. In addition to the potential for fire, this situation can result in normally de-energized equipment becoming energized, exposing workers to unanticipated electrical contact. In some cases fires can weaken poles or hardware to the point of structural failure.

Tragedy Averted
In January 2013, Tacoma Power experienced a pole fire that led us to review our response policies and practices.

The short version of the story is that we were contacted by the Pierce County Fire Department, which had responded to a report of a smoking pole with no visible fire. The fire department had secured the perimeter and was limiting access to the area. A trouble crew, consisting of two line electricians, responded to the site and found a transmission pole with a 115-kV switch and 12.5-kV underbuild.

The initial assessment showed that the pole was smoking about 4 feet above the 12.5-kV lines. After the crew discussed the situation with the system operator, both determined that it was a routine pole fire and could be safely extinguished.

The trouble crew could not extinguish the fire with the first fire extinguisher and returned to the ground to get another. At that time, the fire started to grow in intensity, so the decision was made to remotely de-energize the transmission line using supervisory control. While the system operator was going through the process of de-energizing the circuit, the burning pole flashed over. The explosion resulted in two transmission phases falling to the roadway. The entire area was covered in broken porcelain insulators.

A few seconds after the first explosion, the conductors lying in the roadway flashed when the automatic recloser momentarily re-energized the downed lines. The line was then opened by the system operator.

The good news is that no one was injured in the event, including the firefighters and police officers who had positioned themselves to stay clear of the lines.

The incident review concluded that the pole fire was the result of a leaking transmission insulator. When initially analyzing the situation, the trouble crew thought the voltage driving the routine pole fire was 7.2 kV, when in reality it was 115 kV.

As a result of this event, Tacoma Power formed a team of line electricians, system operators, supervisors and safety personnel to review the incident, gather information on pole fires and make recommendations about best practices.

Changes to Improve Worker Safety
The team interviewed company employees who had the most experience dealing with pole fires, which revealed that most fires were viewed as routine. Many had common origins, such as a leaking insulator or cutout, and could be safely extinguished after the work site was made electrically safe. The team also gathered information from other utilities, and sought consultation from the Tacoma Fire Department, whose experience in fire suppression was invaluable in helping draft best practices.

Tacoma Power then made several key changes to the company’s pole fire practices and policies. First, we tried to eliminate the “it’s just a routine pole fire” mindset. Each pole fire response needs to be assessed based on site conditions and the intensity of the fire. Second, we determined that we will always disable the automatic reclosers for circuits on poles with reported pole fires. This precaution prevents the line from re-energizing in the event of structural failure. Third, we realized that in most cases, a pole fire cannot be safely extinguished if the electrical source driving the fire is not interrupted.

Considerations When Reviewing Pole Fire Policies
What follows are items to consider as you review your practices and policies regarding pole fires. Keep in mind that our information is based solely on Tacoma Power’s high-voltage system; you should consult industry experts when making decisions about protecting your employees from pole fires. Safety rules and requirements should never be compromised when responding to emergencies.

Worker Safety
Each pole fire should be individually evaluated, and decisions should be based on maintaining a safe work site for employees and first responders. Because these situations can change quickly, we now require automatic reclosers to be disabled when we are notified of a potential pole fire. Our system operators have the authority to de-energize lines remotely if necessitated by the situation.

OSHA’s electrical worker safety rules state that only qualified workers are permitted to work on or around energized parts or conductors. Due to the nature of pole fires and their proximity to energized conductors, all OSHA rules must be complied with.

Hazard Awareness for First Responders
Consider providing information to fire departments about the nature of pole fires and the unique hazards they pose to firefighters who may attempt to extinguish a fire prior to the arrival of utility employees. The serious risk of electrical injury cannot be stressed enough.

While Traveling to the Pole Fire
While traveling to the site of a reported pole fire, the responding crew should note the location of jumpers, switches, double dead-ends and other opportunities in the area that would enable electrical isolation if needed.

Working with the system operator to establish the pole configuration – such as circuit voltages, underbuilds, transformers and other power equipment that may be involved – can give the responding crew better information about the site prior to arrival.

If possible, determine if an outage exists, and if so, whether it is localized or widespread. This information can be useful in planning the route to the site.

At the Scene
Perform an initial assessment of the conditions and risks. Advise the system operator of the severity of the situation. Request additional assistance if needed.

If fire and police department personnel are on the scene, coordinate with them to establish and maintain a safe perimeter to keep unauthorized individuals at a safe distance.

Following established emergency protocols, de-energize affected lines as necessary either by manual field switching or remotely via the system operator.

The fire can be extinguished when the pole is electrically safe. High-voltage encroachment is not permitted when extinguishing pole fires. Workers, extinguisher equipment and fire suppression agents should maintain minimum approach clearances to lines that are not grounded.

Extinguishing the Fire
The two most common agents for extinguishing pole fires are ABC dry chemical powder and water. Each agent has advantages and disadvantages. Agents should be chosen based on the type and intensity of the fire.

ABC Dry Chemical Powder
This agent is a common dry chemical used to extinguish Type A, B and C fires. Type A fires include combustible solids such as wood and paper; Type B fires involve flammable liquids; and Type C typically consists of small electrical fires.

ABC dry chemical powder, which contains the active ingredient monoammonium phosphate, melts and flows over burning material and is effective in smothering fires. However, the agent will not soak into wood and may be ineffective when attempting to extinguish fires smoldering deep in poles or cracks. An ABC extinguisher can be identified by the label found on the tank, which is normally red in color and effective to about 10 to 15 feet. ABC fire extinguishers will completely deplete their charge within a matter of seconds. Users should be trained and experienced with discharging a fire extinguisher in a non-emergency training scenario before attempting to use one on a pole top. Note that ABC dry chemical powder is corrosive, can burn skin over periods of prolonged contact and, like any airborne agent, can displace oxygen and create risks for a worker spraying the agent into the air.

Water
Pressurized water extinguishers are typically larger than the dry chemical extinguishers and use air pressure to propel water a distance of up to 25 feet or more, depending on the pressure in the tank. The tanks are silver in color and labeled as containing water. They are for use only on Type A fires such as wood, and are quite effective, leaving no residual mess. However, remember that water and electricity don’t mix. Always follow the manufacturer’s requirements when using an extinguisher.

Fire hoses may be made available from firefighters responding to a pole fire. Electrical workers must take precautions if using a fire hose in the vicinity of high voltage. If the water stream becomes energized, ground personnel as well as electrical workers could be exposed to step and touch potentials. Also, water hoses add weight to aerial devices and could overload either the boom or bucket.

Follow-Up Actions
Pole fires are not everyday occurrences. Information collected from experiences with these types of fires can be used to plan and train for future incidents. Consider creating a protocol for both an after-action review and a written summary for distribution to workers and for use in training.

About the Authors: Jim Boyd, CUSP, is the transmission and distribution safety manager at Tacoma Power. He has more than 35 years of high-voltage experience through his work with investor-owned utilities, municipal utilities and a high-voltage contracting company.

Craig Lohrey is the transmission and distribution assistant manager for construction and maintenance at Tacoma Power. Craig has more than 35 years of experience in the high-voltage industry, including extensive experience in both public power and contracting.

Editor’s Note: If you’d like more information about this topic, Jim Boyd, CUSP, will present “The Challenge of Pole Fires” on November 5 at the iP Utility Safety Conference & Expo. Visit www.incident-prevention.com to register.