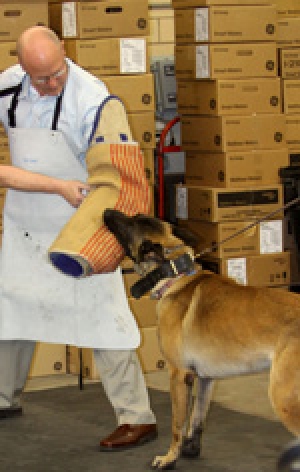 According to The Humane Society of the United States, there are approximately 78.2 million owned dogs in the country and about 40 percent of all households have at least one dog. Of course, the percentage of households with dogs is higher in suburban and rural areas than in cities, but the fact remains that dogs are nearly everywhere. Couple these statistics with the fact that most households with dogs also have electric service, and those of us who work in the transmission and distribution departments of electric utility companies have a potential problem. OSHA would consider dogs a recognized workplace hazard, right?

If we acknowledge that dogs can pose a workplace hazard to your meter readers, service technicians, lineworkers and other employees who may have to enter a yard or premises where a dog is present, then we have to know the significance of the hazard and how to mitigate it for employee safety.

Statistical Review
It’s hard to determine the significance of the hazards posed by encountering dogs in the workplace, but reviewing statistics is helpful. According to Bulli Ray (www.bulliray.com), a leading provider of occupational dog bite safety training:
• On a typical 500-household route, a meter reader, cable installer, delivery person or postal carrier will encounter 300 dogs, and most of them will be aggressive.
• Dog bites are one of the fastest-growing litigation opportunities today – more than $1 billion in settlements is paid each year.
• On average, 10 letter carriers suffer from dog-related injuries every delivery day.
• Medical expenses, workers’ compensation, legal costs, delivery curtailment, employee replacement and other costs associated with dog bite accidents are estimated to exceed $25 million annually for the U.S. Postal Service. The cost in employee pain and suffering cannot be measured.
• Any dog bite is serious. Puncture wounds easily become infected, leading to permanent scars. Based on the depth of the wound, it can cause nerve damage and long-term loss of feeling or function.

A survey by the national Centers for Disease Control and Prevention concluded that dogs bite more than 4.7 million people annually, and almost 800,000 bites each year are serious enough to require medical attention. Dog bites send nearly 334,000 victims to hospital emergency rooms per year – that’s 915 people per day. Bites to children represent more than 50 percent of the total number of cases. Twenty-six percent of dog bites inflicted on children – compared with 12 percent of adults – require medical care.

The Human Factor
Not only can dogs be found nearly everywhere, but another factor to consider is that humans, for the most part, like dogs. From the time we are small children, most of us have been exposed to materials that produce false beliefs about what dogs really are – animals. Most dog owners humanize their pets, a phenomenon we see over and over again in TV and movies. Remember Lassie, Rin Tin Tin and Benji? This humanization goes one step further when dogs are made to talk in animated productions including “Lady and the Tramp,” “Scooby-Doo” and “Underdog.” When we start thinking of dogs as part of our family – as people instead of animals – we are setting ourselves up for problems later on.

If you own a dog, it’s likely your dog believes it’s a member of a pack that consists of you and your family members. Unprovoked and unexpected dog attacks usually occur when a new person – such as a houseguest or a baby – or a new dog are introduced into the pack.

Instinctive Behavior
A dog’s behavior is always a product of one or more of the following drives:
• Defense. All dogs have a natural instinct to survive. Defense for a dog includes two options: fight or flight. A dominant dog will not hesitate to take the fight option, but most dogs are submissive and will choose the flight option. However, when a submissive dog is leashed or in a yard, the flight option is not available to them and they will fight instead. Always beware of a dog on a leash, in a fenced-in yard or in a kennel. Owners will often say their dog doesn’t bite, but what they mean is that their dog won’t bite them. It may not hesitate to bite you.
• Play. Some dogs want to be petted, chase a ball or run around. The strong play drive of these types of dogs is a safety hazard to humans. The dogs get so excited about playing that they will injure someone by knocking them to the ground or play biting.
• Prey. Dogs with a strong prey drive are usually the hunter/killer dogs. They don’t bark much, they stalk their prey and they lull their prey into a false sense of security. They usually attack from the rear without making a sound. A dog with a strong prey drive will allow an intruder to enter the house and then attack instead of barking to scare the intruder away.
• Food. Dogs with a strong food drive are always looking for food or begging for scraps. Dogs with this drive are usually not a hazard unless people are feeding them by hand or approaching the dog’s food.
• Sex. Dogs have a natural instinct to procreate. Enough said.

Hazard Mitigation
Since dogs will be around for the foreseeable future, we have to learn to deal with their potentially hazardous actions through effective training and behavior modification.

First, we have to dispel myths and other long-standing beliefs about dogs. There are a lot of people who think they know a lot about dogs because they have owned them their entire lives. The truth is that they might know the dogs they’ve owned, but not all dogs.

Once that’s accomplished, it’s crucial to give employees a list of desired behaviors that must be followed when they encounter dogs in the workplace. Because utility workers interact with customers in the public domain, good relationships are important. We have to be nice to the customer, respect their property and deal with them in close proximity to our work areas. However, we don’t have to pet or play with their dog.

A good occupational dog bite safety training course can give employees all the information they need to know and provide examples of canine behavior, postures and defense techniques. The cost of one training seminar will be less than the cost of one employee hospitalization or lost-time injury. While the following list is not comprehensive, here are Bulli Ray’s 10 commandments of dog bite safety, reprinted with permission, each followed by helpful tips:

1. Never run away from a dog. It’s a fact that you can’t outrun a dog, and you should never, ever turn your back on one. You can’t keep a dominant dog from attacking, but you can dominate a submissive dog by taking an aggressive frontal posture. The submissive dog will try to circle behind you to attack.

2. Be more aggressive than the dog. You have to let the dog know that you will not back down. Stay forward, stay tall and stay big. Dogs read posture and react to deep voices. Almost every dog knows the meaning of the word “no.” Use it loudly.

3. Use an object to steer yourself to a safe place. Put a stick, a garbage can lid, an umbrella or another item between you and the dog. If the dog bites, it will bite the object and not your body.

4. Keep your back against something. This keeps the dog from circling behind you and attacking, which is what most dogs prefer. If you back up against a house or a fence, you should then be able to move sideways toward an exit.

5. Find anything to put between you and the dog. Most utilities train their meter readers to feed the handheld device to the dog. Another good option is for an employee to remove their hard hat, grab the suspension inside and shove the shell toward the dog. Any barrier is a good barrier.

6. The most sensitive, vulnerable part of a dog is the paw. This doesn’t sound like a commandment, but it is important information that most people don’t know. Reaching for a dog’s eyes, head or nose is dangerous because of their proximity to the dog’s teeth, but grabbing a paw can get a dog to back off.

8. In an attack, face the dog from the side, not the front. A frontal posture is a dominant posture. This is what you show the dog to get them to back down. If the dog keeps coming, turn to the side to protect your vital organ area and to get a better stance for the impact. A side posture gives you a better chance of staying on your feet and makes your abdomen and neck areas less accessible to the dog.

9. Dogs are more likely to attack if the owner is present. Remember that dogs are part of a pack. The owner is usually the alpha member of the pack. Therefore, the dog will try to circle behind you and distract you by biting from the rear.

10. Make noise before you enter an area. One of the worst things you can do is startle a dog. Before entering any area through a door or gate, make noise – such as jingling your keys or yelling “power company” – to let the dog know you are there and to give you a chance to see the types and number of dogs present.

Many people associate dog attacks with the traditional breeds – including German shepherd, pit bull and rottweiler – or the exotic breeds – such as cane corso, Argentine dogo and Japanese tosa – of guard and attack dogs. But the truth is that any breed of dog can bite someone and cause serious injuries. I personally know people who have been mauled by golden retrievers, Saint Bernards, Chihuahuas, dalmatians, rat terriers and a variety of other breeds. Dogs are individuals and must be treated that way.

Training, education and behavior modification are the keys to occupational dog bite safety. Once your employees know the facts and see for themselves what a dog can really do, we can all be more confident that our behaviors around dogs will keep us safe.

About the Author: Ron Joseph, CUSP, is the service operations safety manager for Dayton Power & Light. He is a trained occupational dog bite safety instructor through the Bulli Ray Institute in Ocala, Fla.