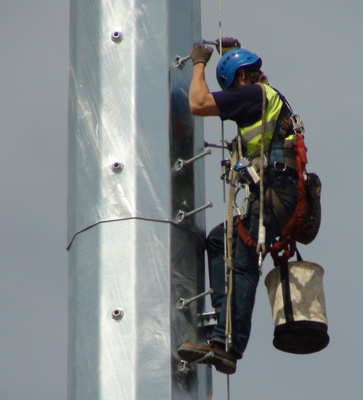 The growth of the wind energy generation industry in the U.S. has been phenomenal. According to the American Wind Energy Association, at the end of 2016 there were over 52,000 utility-grade wind turbines operational in more than 40 states, with a total capacity of 83,000 megawatts. The Global Wind Energy Council’s latest report shows that the U.S. has the second-largest wind power capacity, after China, with 16.9 percent of the world total, and employs over 100,000 people directly or indirectly. As the number of wind turbine towers grows, so does the number of people involved in their maintenance and repair. In 2015, the U.S. Bureau of Labor Statistics projected that employment of wind turbine service technicians would grow 108 percent between 2014 and 2024. There were approximately 4,400 wind turbine service technician jobs as of 2014.

Wind turbine tower heights also are increasing, with the tallest tower currently in the U.S. measuring 379 feet hub height, and even taller towers have been installed elsewhere in the world. While some towers are outfitted with service lifts, in the majority of towers personnel must climb fixed ladders to perform both routine and unusual operations. The increasing numbers and heights of towers mean more workers climbing ever greater distances.

Research studies conducted at the University of Wisconsin-Milwaukee (UWM) that have specifically investigated the renewable energy sector, including wind power generation, along with data from OSHA and the Bureau of Labor Statistics, have identified multiple risks to workers as a result of climbing fixed ladders. Strains and sprains, falls, overexertion and even fatalities were reported to be possible direct consequences of climbing and working at heights during both the construction and maintenance of wind turbines. Indirect risks also were identified, including potentially being electrocuted from contact with high-voltage cables and being struck by an object or caught between objects. Although power generation injury statistics are not separated by fuel source, 2015 Bureau of Labor Statistics’ data indicates that there were three fatal falls in the power generation industry, and 550 falls with nonfatal injuries. Data from the United Kingdom shows 163 total accidents in the wind power industry in 2016, including five fatal accidents. This data generally is assumed to vastly underreport the actual numbers, which may be 10 times higher.

Slips, Trips and Falls
Falls and other incidents resulting from fixed vertical ladder climbing often are cumbersome to analyze since there are many reasons why an injury may occur. Falling accidents commonly are referred to as “slips/trips/falls.” A slip occurs when a contaminant such as ice, oil or water covers the surface of the ladder rung and makes it slippery, causing the worker a momentary loss of balance. A trip, on the other hand, occurs when a worker’s foot comes in contact with an unexpected obstacle, such as a curb, tool or rock, causing a momentary loss of balance. And finally, a fall occurs when a worker loses his or her balance due to a trip, a slip, fatigue, dizziness or one of many other factors. Every abovementioned event has different risk factors, and therefore it is essential to identify the root cause for each fall-related injury.

Climbing Style
Over the past several years our research team at UWM has dedicated substantial efforts to the investigation of this problem and identified many factors contributing to falls and injuries in the wind power generation sector. For example, foot position was found to be important in determining the likelihood of slipping and subsequently falling. Slipping from a vertical ladder ascent or descent was five times more likely to occur when obstructions reduced the available toe space. During our observations of wind towers, the team detected several scenarios (see figures 1A, 1B and 1C) with multiple obstructions around the ladders that make proper foot positioning impossible. 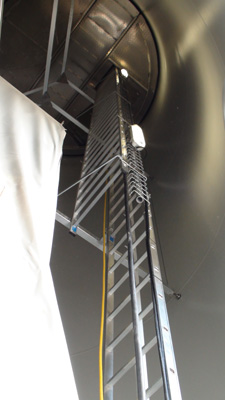 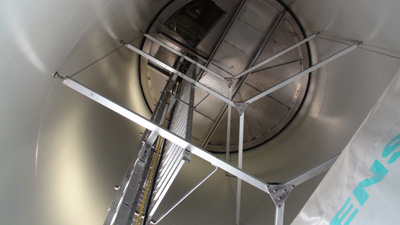 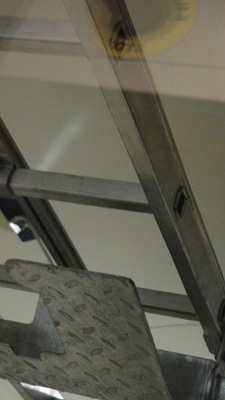 Design Variations and Restrictions
A major issue with wind power generation turbines is that there are large variations in the design of towers from manufacturer to manufacturer, and from one model to another. Examples of these variations include ladder installation clearance, the shape and size of ladder rungs, interior nacelle height, entrances and exits to the nacelle, and material-handling shafts. Several wind turbine models have a restricted nacelle height that doesn’t allow a person to stand and therefore requires technicians to crouch, bend and even crawl on their knees. Many tasks that technicians perform also require prolonged kneeling, followed by climbing down a vertical ladder that may be up to 300 feet in length.

Climbing After Kneeling
In a series of experiment-based research projects, we investigated the effects of prolonged kneeling on the biomechanical response of leg and torso muscles. The research findings demonstrate that prolonged kneeling may compromise balance due to lower leg muscle fatigue, loss of range of motion in the ankle and knee joints, and loss of blood flow to the lower leg. It was determined that the effects are evident after as little as 10 to 15 minutes of continuous kneeling. Adding to the problem is that a person is three times more likely to fall when climbing down a ladder than up a ladder, and experiments at UWM found that climbers utilize their safety harness more when recovering from a fall while climbing down a ladder, indicating that falls are more likely to occur during a descent.

Rung Shape and Hand Placement
Ladder rung shape and size also were found to potentially contribute to ladder slips and falls. Figures 2A through 2C illustrate various rung design features that were collected from a field study of wind farms. Narrow bar rungs pose much higher potential for a fall due to small contact area for foot-rung interaction and hand-rung interaction, and therefore are the least preferred. In general, square-shaped rungs provide more stability for the foot and hand than round-shaped rungs. The physical attributes of the ladder and its surroundings are not the only factors that lead to increased injury risk while climbing. Ladder rungs often are covered with oil or other contaminants that may reduce friction between foot and rung or hand and rung and contribute to slips and falls from the ladder. Some recent research findings indicate that hand placement and gloves with a high friction coefficient can reduce the risk of a hand slipping from a rung. 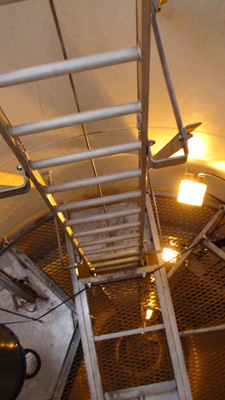 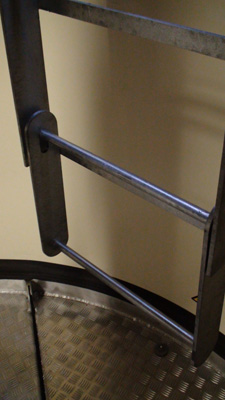 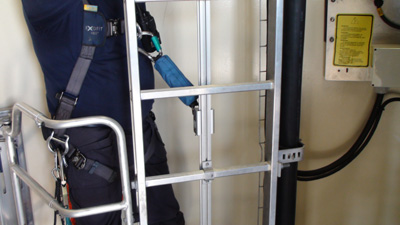 Age
Based on recent interviews with wind industry technicians and safety managers, it is evident that on average, a worker is required to climb up to the nacelle – as much as 300 feet – about three to four times a day. This is a fairly strenuous task that puts a lot of demand on the upper body, arms and shoulders, as well as the lower extremities. Age may become a big factor in determining a worker’s ability to perform the overall demands of the task and may result in fewer workers being able to perform the task. In one of our latest studies it was found that younger (18- to 24-year-old) and more senior (45- to 64-year-old) employees are 15 to 20 percent more likely to fall from ladders than their counterparts ages 25 to 44. The mechanism of falls in the younger group was mainly explained by the speed of the climb and experience. The 45- to 64-year-old age group had slower reactions, larger body mass and reduced strength.

Residential Towers
When climbing on the outside of towers, typically those that are residential, there is a new set of factors that can lead to injury risks. The climbing pegs are positioned in a way that requires special skills, significant physical strength and upper body exertion during climbing; awkward, asymmetric and unbalanced postures also are imposed (see Figure 3A). Despite the fact that a fall protection system always is in place at towers, and proper use will prevent a complete fall, there still are problems that can arise. Although the fall protection system will prevent a fall, the cable may catch, or the worker may end up hanging by the system, potentially swinging around and hitting the tower or climbing pegs, leading to soft tissue injuries. In addition, tools often are carried in a bucket attached to the worker via a rope or cable. This bucket can swing due to wind or even just the motion of climbing, potentially throwing the worker off balance. During securement of the fall restraint system (see Figure 3B), and while working on the nacelle (see Figure 3C), three-point contact cannot always be maintained, and unbalanced body positions are common. Finally, descending the ladder (see Figure 3D) brings the additional risk of lack of vision regarding where to step and therefore could lead to a higher incidence of near misses and injuries. 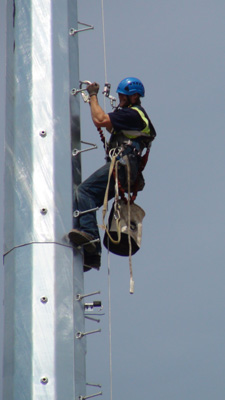 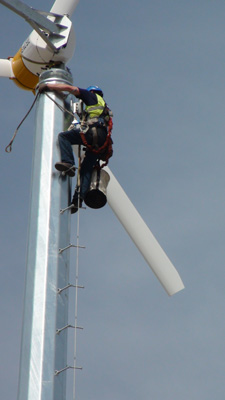 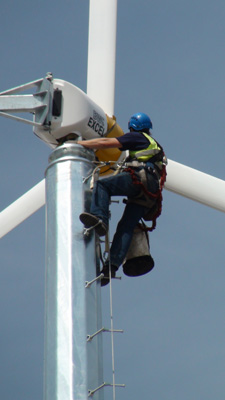 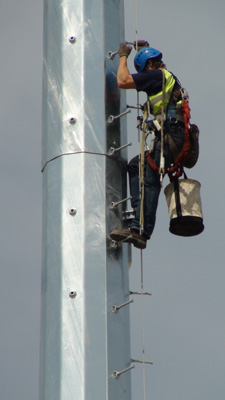 What Can Be Done?
Given that ladder climbing in wind turbine towers poses an array of hazards, what can be done to mitigate the risks? There are multiple OSHA requirements for the installation of fixed ladders that are intended to increase safety. The general industry standards found at 29 CFR 1910.23(d) govern wind turbine maintenance work and specify cage requirements and platform spacing. In addition, the minimum perpendicular clearance between ladder rungs and any obstruction behind the ladder must be at least 7 inches. On the climbing side of the ladder, the minimum clearance between the ladder center and any obstructions must be at least 30 inches, or deflection devices can be provided and the minimum clearance is reduced to 24 inches.

Other than the standards, which address only some of the hazards, fall protection systems are an obvious choice for improving safety. Proper usage is a must and requires specialized training. However, the towers have locations where fall protection systems cannot be used, such as while switching ladders at platforms, in the top sections of towers by the entrance to the nacelle or due to other space restrictions that commonly are present. Climb-assist devices also can help reduce fatigue by decreasing the effort required to climb the ladder, but be aware that these devices suffer from the same limitations as the fall protection systems regarding training and noncontinuous availability across the industry.

Risks can be mitigated in several other ways, including properly maintaining and inspecting equipment; removing contaminants from rungs; providing workers with better gloves and slip-resistant footwear; improving lighting; removing obstructions from the ladder climbing pathway; and restricting work during windy or other adverse weather conditions. Specialized industry-specific training can be effective in reducing or eliminating multiple risks, including those related to ladder climbing. Safety and ergonomics training developed at UWM under the U.S. Department of Labor’s Susan Harwood Training Grant Program is based on new research into injuries in the wind power generation industry. Similar training has been shown to reduce the number of injuries and fatalities in participating companies.

Despite the best efforts to properly mitigate the many hazards associated with ladder climbing in the wind generation industry, there remains substantial risk due to the nature and frequency of the task. Service lift installations in the towers may offer the best solution (see figures 4A and 4B). Many of the risks associated with ladder climbing are completely eliminated by the use of service lifts. The reduction in muscle fatigue alone can potentially increase worker productivity, allow for a more diverse workforce and improve retention. An additional benefit of service lifts is the ability to perform material transfer in a safe manner. Service lifts should strongly be considered for all wind turbine towers, and especially for new installations, as the benefits to both worker safety and productivity easily outweigh the additional costs. 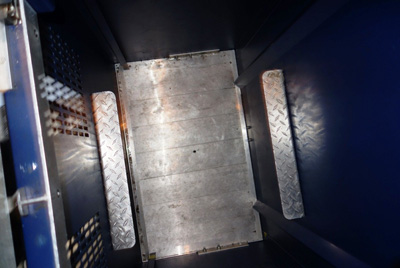 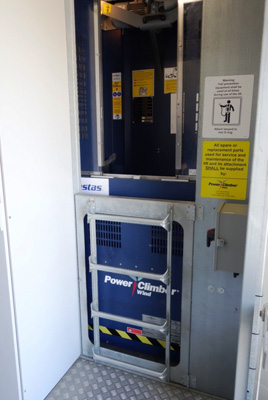 About the Author: Naira Campbell-Kyureghyan, Ph.D., is a professor and chair of the Department of Industrial & Manufacturing Engineering at the University of Wisconsin-Milwaukee. She also is the founding director of several laboratories and centers dedicated to researching joint injury and disorder etiology, as well as prevention countermeasures. Campbell-Kyureghyan can be reached at [email protected].