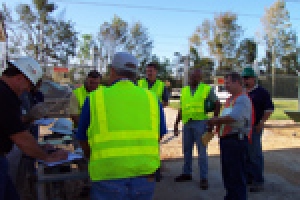 In iP’s earlier installments of the Supervisory Series (April 2011 and June 2011), we discussed the importance of career development for lineworkers targeted for supervisory responsibilities, as well as the supervisory skills required to be effective as a crew leader or foreman. In this installment, we will discuss one additional set of supervisory skills that are possibly the most critical for the new supervisor: human behavior and communication.

Human Behavior
Why do people do what they do? Is human behavior predictable? Human behavior, and people in general, are so complex; could there be answers to these questions? Surprisingly, there are answers. People are complex, but understanding why people behave the way they do has been studied extensively by behavioral psychologists for nearly a century. One group has created a model for understanding human behavior – the DiSC® profile – that works consistently well. This process of understanding human behavior has an application to powerline crew members working in the field and can be a powerful tool for crew supervisors.

The DiSC Personal Profile System
This tool is founded upon a model of human behavior that has four dimensions, as shown in the diagram “Dimensions of Human Behavior”:
• (D) Dominance: The need to be in charge and make decisions; called a Dominator
• (I) Influence: The need to influence others and be involved; called an Influencer
• (S) Steadiness: The need for stability and predictability; called a Stabilizer
• (C) Conscientiousness: The need to be correct and in compliance; called a Corrector 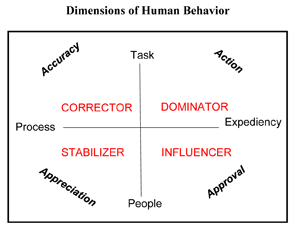 Everyone has these four dimensions within their own personal behavior. Each is definable and measurable using the DiSC profile instrument. However, the four dimensions do not have an equal concentration within each individual’s behavioral makeup. For instance, I may be more susceptible to the D and S dimensions and you may be more susceptible to the I and C dimensions. Consequently, everyone’s behavioral composite has varying concentrations of D, I, S and C.

You might say that makes us all different – and you would be correct. As you will see with this tool, however, I can understand how people are different and where their behavioral preferences lie. With this insight, I can reasonably predict someone’s behavior in any given situation. If I know how someone is likely to react or behave, that helps me find the most effective supervisory approach.

How the Model Works
Look again at the DiSC model. You will notice other words (shown in red) that are associated with each behavioral dimension within the quadrant. Each dimension has certain preferred attributes associated with it. In other words:
• Dominators tend to be concerned with the task and expediency – how fast the job gets done. Dominators are also action-oriented, as shown in this quadrant. They don’t want to talk a lot about the work, they want to get their hands on it and do it.
• Influencers are concerned about how fast something gets done, but rather than tasks, Influencers are focused on people. They also seek approval of those around them. Unlike the D’s, the I’s like to talk … and talk … and talk.
• Stabilizers are people-oriented, too, but they need to understand the process – how something will get done. They also need to feel appreciated for what they do and that everyone is pulling their own weight on the crew.
• Correctors are interested in the process, but they are primarily focused on doing things right. Accuracy and doing it by the book are important to them. Speed is not important to them, but quality is. One of their favorite questions is, “You want the job done right, don’t you?”

Let’s say I’m the foreman of a powerline crew and I know my lineman has a lot of S and C attributes in his behavioral makeup. Next week we have to do a particularly complex job that involves replacing a pole-top capacitor bank. We haven’t done that type of work in a while. As an S/C behavior type, I know that my lineman will need some time to study a job like this because doing it correctly is important to him. I also know that he’ll want to have everything in place – tools, equipment, PPE – and everything at hand to do this job right the first time. I’ll prepare my lineman by alerting him to this job well in advance, helping him get everything he needs lined up for the job and making sure he has time to study the manuals to feel prepared to do the work. I’ll encourage him to ask questions, however mundane they may seem to me. When the job is finished, I’ll compliment him in front of the crew on the quality of the workmanship.

This all may sound logical. Doesn’t every supervisor manage their workers this way? No. Most don’t have these insights into their own team members, supervising instead based on their own behavioral preferences. For example, let’s say as the foreman, my own preferences are D/I. So, what I’m thinking about the job coming up next week is probably … not much. D’s aren’t naturally good at planning ahead. They are fine with the I’ll-deal-with-that-when-I-have-to attitude. I’s like new things and a change of pace and just don’t feel time pressure. However, the S/C dislikes change and hates being pressed for time. If, as the foreman, I just charge ahead with what I’m comfortable with, my lineman feels neglected and upset that I don’t care about his needs. The job may get done, but a lot of unnecessary friction has occurred among the crew members.

Most successful crew leaders learn these things about their people over time, but wouldn’t it be nice to shorten the learning curve? The new foreman needs all the help he can get and dealing with human behavior will be the most complex part of his job.

Communication Skills
There is no doubt that communicating effectively is an art that you only get good at by practicing. With the DiSC model, however, it is possible to improve faster. Based on our earlier discussions, everyone has a behavioral style that can be understood. Each behavioral dimension previously discussed has a variety of attributes special to the D, I, S and C. Is it possible that each style may communicate differently? It certainly is.

The table seen here, “Communicating According to Style,” provides some suggestions about communicating. Let’s look again at an example of how insights into human behavior can help us communicate more effectively with our people. 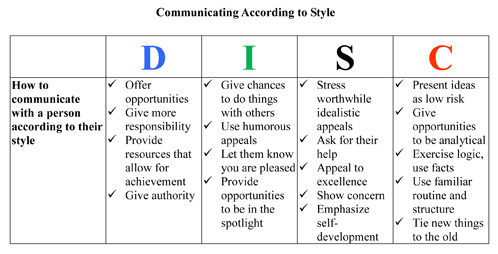 The first crew member I sit down with is my apprentice, Mike. I know that Mike’s behavioral profile is S/I. Both the S and I styles respond well to praise, so I’ll begin by finding something exceptional that Mike has done recently and thank him. This will help put Mike at ease. Because those with higher S concentrations are nervous about confrontation, lightening the mood is a good way to start. Both the S’s and I’s like to feel part of a good working team and I will emphasize how important Mike is to the crew’s team effort. He is in the apprentice training program and I’ll reinforce how important his efforts are, not only for his own career, but for the company’s benefit as well.

Performance reviews are not always a bed of roses. It’s time to talk about some issues I have with Mike’s recent mistakes. I know that I’s are easily distracted which I think is a problem for Mike. I remind him that the rework he has caused lately has disappointed me and cost the company money. This statement isn’t enough for most I’s. Mike may gloss over the problem if I don’t emphasize my concern in a more tangible way. I ask Mike to bring me a written statement tomorrow of what he will do differently to focus on his work without distraction. I tell him that, if I accept his plan, we will use it for the next 30 days, after which we will sit down again to see how it’s going. Now Mike is invested and more likely to succeed.

The important thing to note here is that, in the above example, I discuss everything that I need to with this employee. The manner in which I do it and the words I choose, though, are customized to Mike and the insights I have into his behavior using the DiSC model. Would my conversation have been different if Mike were a different behavioral style? Absolutely. We would deal with all the important issues, but I would adapt my discussion based on Mike’s unique behavioral makeup. Will my efforts at using this model to effectively communicate be perfect? No, but they will most likely be better, especially with practice.

Gain More Insight
Crew leaders and foremen have difficult jobs. The complexity of human behavior complicates their jobs in numerous ways, including how to effectively communicate with each crew member and the many others that they interact with to fulfill their everyday responsibilities. The DiSC model can help supervisors begin to make sense out of these challenges and provide new tools for their supervisory skills toolboxes. If you are interested in learning more about the DiSC model, including instruments and training, please join us at the iP Safety Conference & Expo in Louisville, Ky., where Institute for Safety in Powerline Construction staff members will present “Safety Attitudes and How to Deal with Them.” The conference will be held October 3-5 in conjunction with the International Construction & Utility Equipment Exposition (ICUEE). Visit www.incident-prevention.com/conferences.html for more information.

About the Author: Ronald J. Schenk, CUSP, is the executive director of the Institute for Safety in Powerline Construction (ISPC), an electric utility industry association focusing on safety and training for lineworkers. His career in the utility industry spans 21 years and includes 14 years on staff with an Engineering News-Record (ENR) Top 5 powerline contractor where he served as director of training for 1,800 lineworkers. For more information, call 866-880-1380 or email Schenk at ron@ispconline.com.