How S.A.F.E.T.Y. Brought Bluebonnet Through the Fires 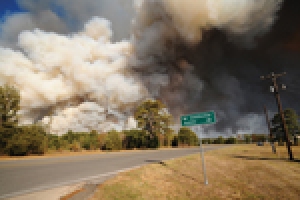 It was Labor Day weekend of 2011, around 2 p.m., when I received a call that there was a fire in my hometown. A big part of Bastrop County, Texas, was burning and thousands of people were being evacuated – friends, co-workers, neighbors and me. Details were scarce, but there were poles and transformers on fire and lines on the ground.

My employer at the time, Bluebonnet Electric Cooperative, believes in working and living its six foundation values: safety, courage, respect, reliability, community and love. Work got under way quickly, responsibly and safely.

Bluebonnet’s emergency action plan, which tells all Bluebonnet employees to shift into emergency response mode, was immediately initiated. During an emergency event, every employee has an important role throughout the restoration and response process.

S: Safety First
After the fires started on Sunday, Sept. 4, 2011, Bluebonnet crews were called in almost immediately to work side by side with firefighters and first responders to ensure the safety of both cooperative members and those who came to fight the fires.

“The Bastrop Complex fires burned 34,068 acres,” said Mike Fisher, emergency management coordinator for Bastrop County. “At the peak of activities, there were in excess of 1,200 responders and utility workers being coordinated safely and effectively.” Bluebonnet’s 279 employees worked more than 224,559 hours over a four-month period during the restoration and response process to return our community to a new normal after the Bastrop Complex fires. This was accomplished with zero incidents.

“Our control center was able to open breakers and fuses remotely to cut power at involved substations,” said Joey Tobola, a Bluebonnet superintendent of operations. “And our crews worked tirelessly to get in front of the fire to cut off power to the one substation that lost communication with the control center to make it safe for the emergency workers and residents. The fire around the Alum Creek substation was intense, but our guys were able to run in and open up the circuit, barely getting out of the gate in time. The fire had surrounded the substation.”

“Bluebonnet crews continued to work alongside the firefighters to ‘make safe’ by opening up feeders, OCRs and fuses,” said Brandon Johnson, crew training supervisor. “In addition, crews were cutting down lines, and removing damaged transformers and burnt poles to keep the roadways open and safe for the firefighters to battle the fires.”

As a Bluebonnet safety compliance coordinator, my job was to make sure our crews, the public and emergency responders were able to safely do their jobs. Throughout the event, I worked among the crews and emergency personnel to help ensure safety for everyone.

I drove through the burn zone to watch over Bluebonnet crews, notifying them of the fires’ direction and checking for downed lines and equipment. In addition, I maintained communication with the firefighters in the field who reported lines or poles blocking entrances and exits that could hinder their ability to work. Smoke and flames were everywhere and nothing was stopping the fires from crossing creeks and roads. The crews needed information at a moment’s notice if the fire was changing course and putting them in danger.

Within a few hours of the start of the fires, Bluebonnet evacuated its headquarters building and control center, relocating to a backup control center. The transition was seamless.

A: Assess the Situation and Create a Strategy to Safely Restore Power
Bluebonnet worked with the Bastrop County Office of Emergency Management and the Southern Area Type I Incident Management Team to assess the situation and create a safe strategy to not only save homes, but restore water, wastewater and power.

“The important thing was to get the community back to normal as quickly as possible,” Tobola said.

During the first 24 hours, our top priorities were to make safe, create detailed maps to identify the burn zone and create a strategy to restore power. Within 48 hours, our geographical information system technology enabled Bluebonnet’s mapping department to create an area map of the burn zone, including both road names and utility systems.

“This map became the Bastrop County Office of Emergency Management’s and Southern Area Type I Incident Management Team’s outline for creating a strategy to accomplish this enormous task,” Fisher said.

Using the detailed, map and following the model for fighting fires created by the Southern Area Type I Incident Management Team, Bluebonnet split the burn boundary map into three zones in order to divide and conquer the rebuilding and restoration process.

F: Follow All Safety Processes and Procedures
Bluebonnet is committed to the safety of all its employees, members and communities. It supports, encourages and educates employees and members about ways to protect themselves and the environment in which they live.

The safety training that prepared Bluebonnet to respond safely and quickly to such a massive event included:
• An emergency response plan: A restoration plan after an event.
• An emergency action plan and egress: How to be prepared for emergencies and fire protection is a basic principle of workplace safety.
• Work zone safety: Identifies the hazards presented by working on or near roads in work zones, and procedures to set up proper work zones and traffic control.
• Distribution line safety: Describes the purpose of grounding to minimize the danger of induced and static charges and ways in which isolated or de-energized lines can become energized.
• Lockout/tagout: Switching, tagging, testing and protective grounding of the system to reduce the dangers created by faults.
• Heat stress management: Prehydrate, take frequent breaks and use the buddy system to identify when a co-worker is in distress.
• Sixteen-hour rule: Limit the number of hours worked by an employee in a 24-hour period to avoid worker fatigue and critical errors when performing safety-oriented tasks.
• Tailboard meetings: Crews meet at the job site to discuss the details of the job; assign task responsibilities; distribute emergency contact numbers, 911 addresses and emergency procedures; identify hazards; and specify the personal protective equipment to be used.

Bluebonnet put additional safety precautions and communication plans in place to ensure employees’ safety and accountability during the fires and power restoration. Twice-daily meetings with the Bastrop County Office of Emergency Management and the Southern Area Type I Incident Management Team kept everyone up to date on how many people and crews were working in the burn zone. The meetings also allowed Bluebonnet to get firsthand knowledge of the progression of the fire and any heightened hazard areas. Bluebonnet zone leaders then took this information to crews through tailboard sessions at the beginning and end of each workday.

Additional precautions were made because of the imminent danger of still-smoldering and burning trees, houses, debris and stump holes. These precautions included multiple layers of personnel working within each of the districts. Personnel watched over the crews and stayed in constant communication with the numerous contractors, personnel, and emergency responders performing restoration tasks and fighting flare-ups.

E: Execute the Emergency Response Plan
Once Bluebonnet’s control center notified the cooperative’s executive team, it immediately put its emergency response plan into action. Bluebonnet’s emergency plan and disaster training were put to the test. Contractor crews for both overhead construction and right-of-way maintenance were called in to assist with quick rebuilding, debris removal and power restoration.

T: Technology and Communication are Important to Have in Your Tool Belt
Technology played an essential role throughout the event. It allowed Bluebonnet to quickly and seamlessly switch to an alternate control center. Advanced mapping systems guided crews into the burn zones by showing where the lines and poles were located.

“There were no longer homes, addresses or street signs to identify what section of the feeder they were currently working on to restore,” said John Riley, Bluebonnet apprentice lineman.

GPS technology in the trucks made crews’ locations available to the control center at all times. Mobile data software allowed line-design technicians in the field to electronically create a materials list and send an order for the materials to be ready the next day.

Using Internet technology, Bluebonnet posted a map of the burn zone on the cooperative’s website and overlaid it with a color-coded map estimating power restoration to different areas. The map was updated daily and provided the community with specific information and updates on Bluebonnet’s restoration progress. Bluebonnet’s communication department used Facebook and Twitter daily to constantly communicate updates about the fire and power restoration to the community. Keeping the community informed provided a level of comfort that was not available elsewhere.

Hundreds of members who had lost homes were requesting power restoration, and Bluebonnet assigned dedicated crews to continue working in the burn zone. All cooperative members affected by the fires were their No. 1 priority. To date, more than 700 meters out of 1,600 lost in the fires have been replaced, and members continue to contact Bluebonnet to get reconnected. Cooperative employees have worked more than 252 miles of line and replaced more than 1,000 poles in the burn zone.

Bluebonnet continues to follow its management best practices to protect the environment and the community it serves. It contracted with arborists and biologists to monitor and advise the cooperative on how to conduct the restoration process with the least amount of impact on the environment and wildlife. An estimated 1.5 million trees died or are expected to die. The cooperative has recycled 300,000 cubic yards of trees, yielding 120,000 cubic yards of wood chips for mulch.

Bluebonnet has overcome many challenges and obstacles since the forest fires of 2011’s Labor Day weekend. It has been able to accomplish this by striving to keep its workplaces incident-free and ensuring employees go home safely at the end of each day.

About the Author: Emily Wilkins, CSA, CUSP, owner of EW Safety Consulting, is a former Bluebonnet Electric Cooperative employee with 10 years of experience in the electric utility industry. She is an advisory committee member of the Utility Safety & Ops Leadership Network (USOLN) and secretary of the Texas Roundtable of Utility Safety Teams (TRUST). Wilkins is also the 2012 recipient of the Carolyn Alkire Safety Advocate Award, which is given to those in the utility industry who display a passion for safety.