Written by David Spooner on December 14, 2018. Posted in Worksite Safety. 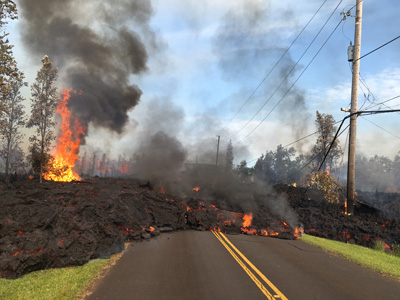 On May 3, 2018, Hawaii Electric Light Co., the company I work for, discovered we had a problem. Lava flows were popping up in the middle of a residential neighborhood in our service territory. This wasn’t the first time Hawaii Electric Light had experienced a volcanic eruption, but it was the first time one had begun in the middle of a densely populated area. We wondered, how would we keep our employees safe during this event? How would we keep the lights on in the affected area? These were the questions that had to be answered very quickly given the circumstances.

In the Hawaiian culture, Kilauea is the home to Madame Pele, the goddess of fire and volcanoes. As the legend goes, from her home in Halema’uma’u Crater at the summit of Kilauea, Madame Pele determines when and where the lava flows. She is the goddess who shapes the sacred land. Hawaiians say that she has a reputation for being as fickle as she is fervent. She proved many times during the May 2018 eruption that she was indeed in charge.

Health and Safety Concerns
From the first day of this new lava flow, Hawaii Electric Light’s management had concerns for the health and safety of our employees. Large cracks, also referred to as “vents,” were opening in the earth without warning. We knew that these ground cracks were sending out steam, but we also knew from the past that there was a high probability that sulfur dioxide and hydrogen sulfide – both toxic gases – could be present. These gases have a rotten egg smell and can float on the wind for long distances.

Very quickly, some of the activity around these ground cracks began to intensify, and large amounts of gas began to escape. The sound of the gas escaping from the vents is deafening; to me, it’s equivalent to a Boeing 747 at takeoff. In addition, small bits of lava – which has a temperature of roughly 2,000 degrees Fahrenheit – began to be tossed out from the vents, just like bacon that is spattering in a frying pan. We had to use extreme caution when approaching vents as the tiny lava bombs escaping from them had the potential to cause extreme injury to anyone in close proximity.

The County of Hawaii put Leilani Estates – the neighborhood where the lava flow began – under a mandatory evacuation. At the same time, Hawaii Electric Light was being asked to deal with the poles and wires that were falling due to the ground cracks and hot lava, which hindered emergency personnel and residents who were trying to evacuate the area. There also was a cell tower in the middle of the neighborhood that needed to be kept on if at all possible. In the first week after the lava began to flow, we sent employees in on a daily basis to manage some of these issues.

Over time, the small vents that had opened up in the beginning days of the eruption began to turn into full-fledged lava flows, and their numbers quickly increased, eventually topping out at 22 separate vents. Hawaii Electric Light was concerned that a lava flow or a ground crack could open up near employees working in the affected neighborhood, and that such an occurrence could cause them to become trapped with no way to escape the area. Our crews who were working in the area stayed on high alert for any changing conditions.

As the hazard level of the lava flows increased, eventually we were informed by the County of Hawaii that if our employees needed rescue near the lava flows, no one would be coming. Due to that declaration, we immediately stopped workers from entering the evacuation zone and began to implement our safety plan to address the situation. The safety plan was formulated in the first two weeks after the ground cracks began to open up in May, after consulting with a senior volcanologist from Hawaii Volcanoes National Park.

Lava Entry Zones
The first order of business with regard to implementing our safety plan was to designate three entry zones in the lava flow areas. These zones were developed by Hawaii Electric Light’s management with input from the County of Hawaii and volcanologists. Zone 1 was the most hazardous and very close to the lava flows. Zones 2 and 3 followed the borders of Zone 1, but these additional zones increased the distance from the flows. Large maps with the designated zones clearly indicated were placed in the baseyard so that employees could study them. As the lava flows changed and increased over time, the zones were expanded as needed, as were the maps in the baseyard. Each zone had requirements that employees had to adhere to in order to enter the respective area, as follows.

Lava Zone 2
Lava Zone 2 had all the requirements of Zone 3, plus one other stipulation: Every employee entering the zone was obligated to have a buddy or wingman, and the two had to stay together at all times while working.

Lava Zone 1
Zone 1 was designated as a no-entry zone due to unpredictable conditions and the hazards to employees.

With these safeguards in place, Hawaii Electric Light continued to do our best to keep as many of our customers as possible from losing power.

One Month Later
About a month after the lava flows began to pop up, what had started as small vents turned into large volumes of 2,000-degree lava. These lava flows destroyed everything in their path on the way to an entry into the ocean. In that first month, the U.S. Geological Survey estimated that 113.5 million cubic meters of lava had spewed out of the vents – enough lava to fill 45,400 Olympic-size swimming pools.

The lava continued to flow for about four months, but in early September, Madame Pele suddenly stopped all lava activity. Even though lava flows are not considered officially over until one year after all activity has ceased, the residents of areas near the lava flow whose property did not sustain any damage, or who were evacuated because of hazards posed by toxic gases, were eager to get back home and back to normal. Hawaii Electric Light worked with the County of Hawaii and residents to remove and replace damaged electrical wires and poles that had been destroyed by Kilauea’s eruption and the earth’s seismic activity. We performed safety assessments of customers’ equipment, and power was restored as long as it could be done safely. But even now, many questions remain about restoration, as some areas continue to be cut off by the large lava flows, barring access and leaving those areas with no utility infrastructure. These issues could make for an extremely long restoration effort.

Final Tally
In the end, the 2018 Kilauea eruption damaged or destroyed more than 900 utility poles and other electrical equipment. About 935 customers lost power and more than 700 homes were destroyed. Several major roadways and communities were covered by lava. The eruption also added about 835 acres of new land to the island of Hawaii. Interestingly, all new land created by volcanoes is owned by the state of Hawaii.

I am happy to report that no injuries to Hawaii Electric Light employees were reported during the lava flow. We had a few minor incidents when the winds shifted and gas began to drift over our crews. This prompted the use of respirators and an immediate evacuation, but nothing serious came of it. Proper training enabled crews to follow our safety plan and leave the area in an orderly manner. There were no close calls with any of our employees because of ground cracks or lava flows.

Finally, I wish I could tell you that we kept all the lights on throughout the duration of the lava flow, but I have to report that Madame Pele was just as the Hawaiians say – fickle and fervent. She chose what would be destroyed and what would be left intact. She was in command, and we could do little to influence the outcome. The flow has stopped for now, but what is certain is Madame Pele will return in the future. Aloha.

About the Author: David Spooner has worked in the utility industry since 1979, first as a lineman in South Carolina and now for a utility in Hawaii. His focus is keeping employees safe and helping them expand their leadership skills. He can be contacted via LinkedIn at www.linkedin.com/in/davidaspooner/.