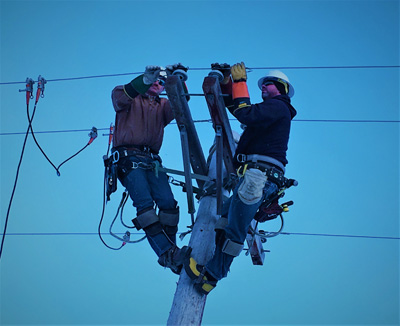 When the earliest linemen first began to ground lines for worker protection, they attached a small chain – known as a ground chain – to the conductors, with the end dropped to the ground. When I began to work on a line crew, I’m sad to say that my grounding practices weren’t much better than those used in the early days. I wish someone had better explained to me then the situations that could arise, the ways grounding could protect me and the best methods to accomplish it. So, in an effort to help out other lineworkers in the electric utility industry, I want to share in the following pages some of the important aspects of grounding that I’ve learned throughout my career.

Worker Protection
Ever since enforcement of 29 CFR 1910.269 began in 1994, OSHA has required grounding practices that will protect employees in the event that the line or equipment on which they are working becomes re-energized. The equipotential zone, or EPZ, is made to do just that.

If you read paragraph 1910.269(n)(3), the preamble discussion and Appendix C to 1910.269, titled “Protection From Hazardous Differences in Electric Potential,” OSHA’s intent seems clear. To summarize, install temporary grounds and bonds at the worksite in such a manner that keeps the worksite at the same potential and prevents harm to workers even if the line is accidentally re-energized or exposed to induced voltages. You can follow Appendix C as a one-size-fits-all approach or perform your own engineering analysis to create procedures. But keep in mind that if you create your own procedures, you must be able to demonstrate they will protect your workers.

It’s important to understand that equipotential grounding has two components:
1. Low-impedance worksite grounding to limit voltage rise on the circuit while raising fault current sufficient to operate the protective device.
2. Worksite bonding (EPZ) to eliminate differences in potential that the worker may be exposed to, thereby limiting current flow through the worker’s body.

Bonding may be interconnected with the grounding system or kept separate from it. In either case, the grounding function is critical. If it “fuses” or fails, the worker is exposed to deadly electrical hazards.

Worksite Bonding
A bonding mechanism is a device that effectively interconnects all conductive objects at the worksite. It’s not subject to the same sizing requirements of a protective ground since it’s not intended to carry fault current when not directly interconnected as one of the current-carrying components. It simply establishes and maintains the worksite to equal potential, helping to ensure worker safety regardless of a voltage level of zero volts or 5,000 volts.

The conductivity of the worksite components matters. A steel structure creates a natural bonding element for the worker. Jim Vaughn’s August 2015 article on personal protective grounding (see www.incident-prevention.com/ip-articles/equipment-operations/train-the-trainer-101-practical-personal-protective-grounding) articulates how every conductive element introduced into the worker’s area must be interconnected into the same system to prevent induction fatalities in transmission systems. Ground mats provide a solid bond on underground systems.

A semiconductive material such as wood is more problematic due to variations in materials and ever-changing resistance values. With a worker’s gaffs in the pole, the interior as well as the exterior must be considered. The best bond accommodates a good path for electrons to travel on the exterior and interior of the pole at the location of the worker’s feet to the depth of the gaffs. Though much industry testing has been done, controversy over bonding mechanisms such as cluster bars and pole grounds hasn’t gone away. Every utility and contractor needs to follow the principles laid out in Appendix C to 1910.269 or create their own procedures through their own engineering analysis.

Energized Grounded Lines
OSHA uses the term “energized grounded” for voltage rise on a grounded line. Appendix C to 1910.269 states that when working on a grounded line without the use of an EPZ, it’s not necessary to insulate according to full system voltage, but only that level to which the line can become energized.

Based on my review of a study conducted by the National Electric Energy Testing, Research & Applications Center, as well as conversations with industry experts, I have learned that some testing has resulted in 17-24 percent of the voltage, which was impressed upon the grounded object. One investor-owned utility has stated that up to nearly half of the voltage impressed upon an effectively grounded line will result. Since a vulnerable worker would never hold on to a grounded line that reaches 1700 volts (24 percent of a 7200-volt source), why would the same worker hesitate to protect against it? Many lineworkers who are so diligent at installing worksite grounds either lack understanding about this, as I did in the past, or just suppose it could never happen to them.

Current Flow Through the Body
Voltage difference across the body creates current flow through the body. Transmission and distribution systems possess thousands of times more fault current than the lethal threshold. The current that flows through a human body during electrical contact is equal to the voltage difference across the body divided by the body resistance. With 2000 amps of available fault current, even if a low-resistance parallel ground absorbs 99.9 percent, that still leaves 2000 milliamps for an unequal resistor (worker) in a parallel path, which is well over the lethal amount and even reaches the cardiac standstill threshold.

As demonstrated by Charles Dalziel’s research, shock duration is of great importance. Many utilities base their safe thresholds on quick lockout. One utility I am aware of falsely assumed quick lockout until energization occurred on a grounded line through a resistor and a worker making repairs couldn’t let go during a sustained shock. The 50-milliamp “safe” threshold was insufficient because a 20-milliamp shock at sustained levels causes lethal respiratory paralysis.

Worker Protection and Wooden Poles
As the environment changes from dry to wet and vice versa, the resistance values of a wood pole as well as a lineworker are ever shifting on the high-low scale. Worker safety is inversely proportional with these ever-changing values. If just one of the values goes low, an unprotected worker is at serious risk. If both resistance values go low, a worst-case scenario is created, leaving the worker at extreme risk should the line become energized without an EPZ or use of insulation.

Age, treatment and moisture all affect a wood pole’s resistance. The lower the resistance value, the greater the conductivity. When lacking an EPZ, the elevated conductivity increases the difference in potential between the feet and hands when the line becomes energized. However, when an EPZ has been established, this same low resistance can actually strengthen the EPZ and increase worker safety. The closer the bonding mechanism is to the worker’s feet, the stronger it becomes and the safer the worker.

NIOSH states that a dry human body can offer resistance up to 100,000 ohms, but sweat, water, humidity, rain and broken skin can lower it to 1,000 ohms. At 1,000 ohms, a 120-volt sustained shock can be as fatal as a 120-milliamp surge through the body. Though the voltage is low, the resulting steady current will likely cause ventricular fibrillation.

NIOSH also states that an electrical contact over 600 volts will puncture the skin at the entrance and exit points, further reducing the body’s resistance to 500 ohms, enabling current to navigate at ease through the inner moist tissue. For this reason, as stated in the preamble to the 2014 final rule on 1910.269 and 1926 Subpart V, “OSHA has considered the minimum resistance of an employee to be 500 ohms, not 1,000 ohms, as specified in the paper (59 FR 4406).”

A low wood-pole resistance is capable of producing a difference between the hands and feet greater than 600 volts without an EPZ. During electrical contact, the 500-ohm entrance and exit points can offer the death blow. As an example, a 600-volt difference would result in a vicious 1200-milliamp shock capable of causing ventricular fibrillation in just a few cycles.

Protecting Ground Workers
Since establishing an EPZ isn’t an option for ground workers when repairing downed conductors, other methods of protection must be explored.

OSHA states in Appendix C to 1910.269 that employees must not handle grounded conductors or equipment that can become energized to hazardous voltages unless the employees are within an EPZ or protected by insulating equipment.

Essentially, if an EPZ isn’t practical, use insulation.

Workers must protect themselves through use of insulating equipment rated for the voltage that can be impressed upon an effectively grounded line. Insulation does not eliminate the need for worksite grounds unless all requirements of 1910.269(l), “Working on or near exposed energized parts,” are met.

Dielectric Footwear
Since conductors will inadvertently contact the body while wrestling it on the ground, the effectiveness of rubber gloves can be limited. That brings us to dielectric footwear as a supplemental form of insulation.

In the preamble to the 2014 final rule on 1910.269 and 1926 Subpart V, OSHA stated that the agency “is revising its general industry standard on foot protection, 29 CFR 1910.136, to require employers to ensure that each affected employee uses protective footwear when the use of protective footwear will protect the affected employee from an electrical hazard, such as a static-discharge or electric-shock hazard, that remains after the employer takes other necessary protective measures.”

Here is an application example: A downed conductor is grounded at the worksite as the primary form of worker protection. The worker on the ground is wearing rubber gloves to guard against the voltage that the line could become energized to, but the conductor could contact uninsulated portions of the body. High-voltage-rated dielectric footwear now becomes a supplemental form of protection needed to eliminate the remaining electric shock hazard.

Sheath Continuity and Transfer of Potential
Continuity is required to be maintained on a concentric neutral, even when cutting a single-phase cable midspan. How can you bond across the neutral and also establish an EPZ with a ground mat in a ditch full of mud and water?

Total isolation of all energy and ground sources may the best option, but it must meet all of the criteria as stated in 1910.269(n)(2) through 1910.269(n)(2)(iii) and usually requires jacketed cable. Total isolation eliminates the need for an EPZ and removes the possibility of transfer of potential. The worker should use a systematic process to minimize human error since this procedure reaches beyond the boundaries of traditional grounding.

Summary
The EPZ is an important, required part of personal protective grounding. When impractical, an alternative form of protection could also save your life if the grounded line you’re working on becomes energized. Will this ever happen to you? Only God knows, but your family needs you to come home even if it does, and the EPZ and acceptable alternatives can help assure that.

About the Author: Dwight Miller began working on line crews 32 years ago and has dedicated his last 10 years to safety and training. He currently serves Ohio’s Electric Cooperatives as director of safety and loss control, where he is committed to promoting a culture where lineworkers think, integrity is held high and safety is non-negotiable.