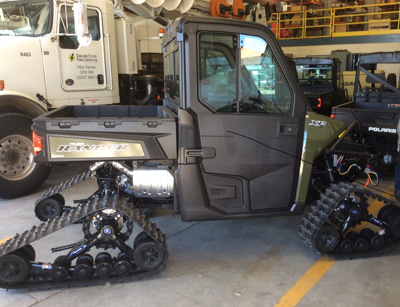 Sunflower Electric Power Corp. is a generation and transmission cooperative located in Western Kansas. We have approximately 2,600 miles of overhead transmission lines, which we patrol annually using vehicles. While you may have heard stories about Kansas being flat as a pancake, they are not true. Several areas of our service territory feature deep ravines, water crossings, washouts and rock outcroppings that make line patrols challenging and hazardous. In the past, patrol vehicles used by our line technicians were either pickup trucks or standard-equipped side-by-side all-terrain vehicles (ATVs). After enduring a few ATV-related accidents that caused damage to both workers and equipment, we knew it was time to evaluate our line patrol program to see what we could do to make it safer.

Our most recent injury, which occurred in 2016, resulted in facial injuries that required reconstructive surgery after an employee hit his face on the steering wheel of the side-by-side ATV he was operating. Following is a summary of the accident.

A line technician was patrolling by himself and came upon an area of grass that was close to 4 feet tall. He did not see the depression in the ground in front of him and dropped the front end of the ATV he was driving into a washed-out area that was approximately 4 feet deep and 6 feet wide. Upon entering the depression, the ATV came to an abrupt stop and the line technician’s face made contact with the steering wheel. This caused multiple fractures of his nose. The line technician was wearing the standard seat belt, which consisted of a lap belt and shoulder strap, but it didn’t lock up fast enough on impact to prevent injury. Fortunately, the technician was able to get himself out of the ATV and walk approximately one-eighth of a mile back to the main road, where his pickup was parked. He then called other crew members for assistance; they transported him to the local hospital, where he was treated for his injuries. Unfortunately, the technician had to have follow-up surgery to repair his broken nose.

Identifying Areas for Improvement
This accident and the other accidents I referenced in the first paragraph took place during a span of approximately three years, and they were thought to have occurred mostly due to the ATV operators using excessive speed and/or poor driving technique. Each accident was reviewed immediately after it occurred, but no formal root cause analysis (RCA) was ever performed. After completing a review of the most recent accident, a team was pulled together to complete an RCA of all line patrol events, including those that resulted in both bodily injuries and equipment damage. The RCA team consisted of members from Sunflower Electric’s safety, transmission operations management and line technician groups. The RCA focused on training, equipment, speed, terrain and PPE. The outcome of the analysis identified several areas for improvement.

Our line patrol practice at the time was to have one line technician operate a standard side-by-side ATV that was outfitted with a lap belt and shoulder harness. The line technician’s PPE consisted of eye protection and an optional helmet while operating the ATV. We thought no formal operator training was needed because “everyone” knows how to ride an ATV out here in Western Kansas.

The RCA identified the lack of a formal operator training program as an essential element that was missing from our line patrol program. Assuming that everyone knows how to safely operate ATVs was a mistake. In addition, the equipment being used did not provide adequate protection for the operator should they encounter rough terrain. The lack of a written standard operating procedure (SOP) that covers all aspects of the line patrol also was identified as a contributing factor to these accidents, along with the need for additional PPE and possible equipment improvements.

Implementing Solutions
We developed an SOP that includes several new procedural elements we feel are essential to enhance safety while executing line patrols. The first requirement is that two people must perform all line patrols while using an ATV/UTV. We feel this allows the driver to concentrate on one task – driving – and not trying to also perform inspections at the same time. One person may perform line patrols only if they are using a pickup truck to do so. While performing patrols using a pickup, the individual is required to periodically communicate with their supervisor during their shift: at the start of the shift to brief the supervisor on the planned route for the day; at noon to update their location and confirm everything is OK; and again at the end of the day to let their supervisor know they have completed their route and are back home safely.

From an equipment standpoint, we felt that the standard-equipped side-by-side ATV did not provide adequate protection for our line patrol technicians. We spent a considerable amount of time investigating equipment options and arrived at a decision to upgrade our equipment to a side-by-side UTV with a four-point harness system, a cab that includes a windshield and wipers, removable doors and a rear bed that provides space to carry some tooling. We added brush guards, a heater for winter patrol work and a strobe light to enhance the visibility of the unit while in the field.

During the RCA, our line technicians described the difficulties of traversing rough terrain in the remote areas of the system with the ATVs. The combination of tall vegetation, washouts, loose rock and deep mud conditions can be encountered during many of the line patrol routes. These conditions make travel very difficult and hazardous. The result of the line technicians’ input was a recommendation to install rubber tracks on one of the new UTVs for a trial period to see if this option would provide improved handling performance. The tracks are a pricier option for UTVs, so we did not want to outfit all of the units without trying them out first. Some of the line technicians were skeptical of the tracks because they slow down the unit considerably. The cruising speed with tracks is about 30 mph compared to the tire-equipped cruising speed of 50 mph.

Trial Period Outcomes
The outcome of the trial period was very favorable. The line technicians reported overall improved handling performance, including the ability to climb steep grades at a much slower but controlled speed; a lighter footprint, which causes less crop damage; the ability to cross wetlands, ditches and muddy terrain without getting stuck; and the ability to traverse loose rocky areas and uneven terrain in a controlled manner. In addition, the overall ride was much smoother than with a conventional tired vehicle, which made the patrol less physically demanding on the technicians. An added feature of the tracked vehicle was the ability to go through a recently burned-out area. The area had many sharp tree stumps that caused several flats on a tired unit but did not negatively affect the tracked unit.

Within the first six months of the proposed one-year trial period, all skeptics turned into believers. After hearing the stories about how well the tracks performed, all of the line technicians were requesting tracks for their UTVs. We adjusted our vehicle budget and diverted sufficient funds to cover the additional conversion kits so that we could retrofit more UTVs with tracks before the next scheduled round of line patrols were to begin. Five of our six units now have tracks.

The PPE requirements also were enhanced to include the use of a four-point harness system that was installed in the UTVs. This system – which securely holds passengers in place – is required to be engaged prior to putting the vehicle in motion. We believe this will eliminate the possibility of anyone hitting the steering wheel or windshield during an abrupt stop or change of direction. We also require the use of a DOT-approved helmet to be worn by all passengers. We have allowed the use of a half-helmet, which we believe is cooler and more comfortable during hot summer days.

Summary
In summary, we believe our line patrol program has been greatly enhanced through the use of a rigorous root cause analysis. The RCA identified several areas of our practice that were contributing factors to past accidents. We believe all areas of concern have been addressed, that we have a much safer SOP in place, and that we have supplied our line technicians with the appropriate tools, equipment and PPE so they can complete their work in a safe, efficient and effective manner. Since the equipment upgrades, training and PPE enhancements have been in place, we have not had any incidents. Kudos to the RCA team who completed the analysis and came up with the recommendations.

About the Authors: Rob D. Adams, CLCP, CUSP, is a safety technician for Sunflower Electric Power Corp., headquartered in Hays, Kansas. He can be reached at radams@sunflower.net.

Pete Prast, P.E., is the executive manager, transmission, for Sunflower Electric Power Corp. He can be reached at pprast@sunflower.net.