Confined Space Training: It Has to Be Done Right the First Time 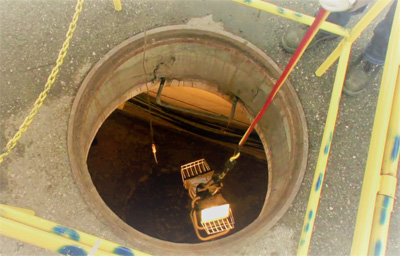 Over the last few decades, part of my work also has included training hundreds of workers in confined space entry. Typically training covers two major components: teaching trainees the regulatory requirements of the standard for confined space entry, and training them about their employer’s specific processes and procedures for conducting confined space entries in compliance with the standard. However, as Jarred O’Dell, CSP, CUSP, noted in his February 2016 Incident Prevention article, “Trenching by the Numbers” (see https://incident-prevention.com/blog/trenching-by-the-numbers), “This is a great approach but perhaps an incomplete one. Truly impactful safety training typically includes a third component: sharing of personal experience.” In this article, I want to share some of my personal experiences and goals as they relate to training workers on the topic of confined space entry, with the hope that I can offer some useful takeaways to other trainers and utility safety professionals.

A Major Motivator
I’ve always been passionate about teaching confined space entry, and my major motivator is this: If workers aren’t properly trained to enter confined spaces, they might not be able to go home at some point. I end every training session I conduct, regardless of the topic or skill level of those I’m training, by explaining to the trainees that the most important thing they will do each and every day is to safely go home to their families, their friends, their plans, their dreams – their lives.

I want my trainees to know that the reason we have confined space procedures, training, permits, direct-reading portable gas monitors and non-entry rescue equipment is because people can die in confined spaces. I also want them to know that many people who have died in confined spaces weren’t even the entrants. Nearly half of those who have died in a confined space situation were would-be rescuers. I want my trainees to care enough about safely going home at the end of the day that they will perform the necessary confined-space tasks correctly the first time, based on the training they have received, because I’ve found a way to make this training important to them on a personal level.

I started doing this long before I found out that trainers have a term for it; it is often referred to as WIIFM, or “What’s In It For Me.” Beyond understanding the gravity of returning home each day the same way they arrived for their shift, there are some skills and technical knowledge trainees must take away from confined space training. So, what is it that they need to remember long after they’ve successfully passed the test I give them at the end of that training?

They need to know what constitutes a confined space like the back of their hand. All three of the following criteria have to exist in order for a space to be considered confined. First, a space has to be large enough that an employee can enter it to perform work. Second, it must have a limited or restricted means of entry or exit. And finally, the space must not be designed for continuous employee occupancy. I expect that after they have been trained, each of my trainees will be able to look at a space, recall these three criteria and be able to definitively state whether or not the space is considered confined.

In addition, workers need to learn and remember exactly where to look in their employer’s safety manual or procedure book to find the criteria to determine if a confined space is a permit-required confined space. To make that determination, a worker should ask if the space has one or more of the following characteristics:
• Does it contain or have the potential to contain a hazardous atmosphere?
• Does it contain a material that has the potential for engulfing an entrant?
• Does it have an internal configuration such that an entrant could be trapped or asphyxiated by inwardly converging walls or by a floor that slopes downward and tapers to a smaller cross-section?
• Does it contain any other recognized serious safety or health hazard?

The previously listed characteristics contain phrases that are not common in many work environments. Thus, workers also need to know the definitions of phrases such as “hazardous atmosphere,” “engulfment material,” “internal configuration” and so on. When I explain hazardous atmospheres during confined space training and on the job site, I provide examples of the gases/toxins that are being monitored on our gas monitors. In our company, we monitor for high and low oxygen levels, combustible gas (methane), hydrogen sulfide and carbon monoxide. I also explain to employees the ways these gases/toxins can get into our confined spaces.

When I discuss engulfment with workers, I use quicksand or water as an example of the ultimate engulfment material.

For years I struggled to offer a good example of internal configuration, and finally I came up with this: Think of a long, narrowing funnel that is used to replenish or top off transmission fluid. Imagine crawling into it as it’s laid on its side. It becomes increasingly narrow and begins sloping downward. Eventually, you get wedged in the space with your shoulders, unable to move forward and unable to go back, trapped by your own body weight.

Other serious space-related hazards that I work to discuss in everyday language include heat, noise, water in the space, and energized electrical wires or cables.

Entrants, Attendants and Supervisors
Like any utility safety professional, when it comes to confined space entry, I want workers to strictly follow their employer’s confined space program. My current employer requires that any confined space entry be documented on the same company form that is used for permit-required confined space entries. This includes documenting gas monitor readings as well as the names of the attendant, entry supervisor and authorized entrants.

Not only do I want them to follow their employer’s program, but it’s also critical that employees are well-versed in the responsibilities of authorized entrants, the attendant and the entry supervisor. These duties can be reviewed in OSHA’s confined spaces standard, and they also should be included in the employer’s confined space entry procedure, but beyond that trainees need to know the importance of each of these roles and how interdependent they are.

It is essential that attendants understand how – and are prepared – to use non-entry rescue equipment. In addition, each attendant must understand that he is not to enter the confined space to perform entry rescue unless he is relieved by another attendant and has been trained and equipped for rescue operations.

Finally, I want every member of the confined space entry team to be familiar with the direct-reading portable gas monitor they are using. In most instances, either the attendant or the entry supervisor will conduct the pre-entry monitoring. In keeping with our company policy and OSHA’s Safety and Health Information Bulletin (SHIB 09-30-2013) “Calibrating and Testing Direct-Reading Portable Gas Monitors” (see www.osha.gov/dts/shib/shib093013.html), the gas monitor must be bump-tested before use each day. Monitor readings and bump test confirmation also must be recorded on the company entry permit.

Summary
Confined space entry is not a complex process, but it is not an easy process either. It requires an employer to put in place a proper program or procedures that include training employees in the nature of related hazards and how to adequately address anticipated hazards. To be effective, the training has to motivate the employees. For their safety, they need to remember what they’ve been taught beyond successfully passing the written test at the end of the training. Confined space training can become a matter of life and death, so – just like entering a confined space on a job site – it has to be done right the first time.

About the Author: Tony Barton is the safety training and development manager for Cupertino Electric Inc. in San Jose, Calif. He has more than 36 years in the safety profession, with over 30 years in the construction industry, and holds a master’s degree in safety from the University of Southern California.