Are You Taxing the Variables? 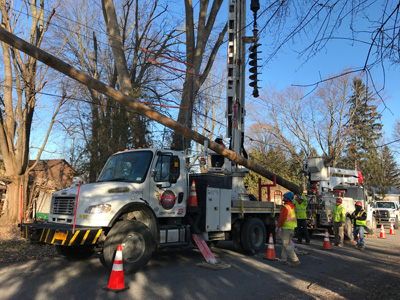 Planning is a critical part of our work in the electric utility industry. Inevitably there will be unknowns in each plan we put together; the more variables there are, the less control you have over your intended outcomes. So, it’s worth spending the time to identify and address those unknowns. In the remainder of this article, we will cover how to identify the critical elements and variables in your projects as well as how to weigh the consequences of those variables to help ensure the best possible outcomes for your plans.

A friend of mine who is a psychologist once shared a story from her childhood with me. She said that whenever she had a plan for something that appeared overly complicated, her father would say, “Be careful – you are taxing the variables!”

What did my friend’s father mean by that? To put it simply, taxing the variables occurs when there are too many variables that depend upon the success of other parts of your plan. Let’s say you have to check in for a flight at the airport. The flight leaves at 7:30 a.m. Boarding begins at 6:30 a.m. You live two hours from the airport and want to arrive two hours before departure. Leaving your house at 3:30 a.m. should get you there at 5:30 a.m., so you set the alarm on your cellphone for 2:30 a.m. That plan sounds simple enough, right? But what are some of the unknowns in the situation, those variables that may arise and interfere with your plan? For starters, the battery in your car has been a bit weak lately and it’s going to get very cold later today. Will your car start when you need to leave for the airport? You set the alarm on your cellphone for 2:30 a.m., but did you remember to put the phone on the charger, too, so that the battery doesn’t die? Oh, you just remembered it’s also a holiday weekend. Is two hours still sufficient to make it to the airport, or should you factor in extra driving time because of traffic concerns?

There will be unknowns in each and every plan you make. In mathematics, the more unknowns there are to solve for, the more complicated the equation. In chemistry, solving for the unknown composition of chemicals in a solution requires you to limit the unknowns using a litmus paper test. Performing the test determines if the solution is an acid or a base, thereby limiting your unknowns to half of the possibilities. The point here is that as the number of variables in your plan increase, the more complicated things become and the more likely something is to go wrong.

As it pertains to your work in the utility industry, identifying the unknowns in your plans is critical to personnel safety. Here’s an example to think about. When you are working a storm, you open the line at a switch point, test dead and ground to the common neutral, but you can’t use equipotential grounding. Let’s say the wire is down five sections up the road. All phases are on the ground and burned open, leaving a space between ends. What are some of the immediate unknowns that come to mind? Five sections back at the switches, you know the line tested dead. Are both ends of the downed wire also dead? You’ve grounded to the neutral at the switch point. Let’s say there also was a car-vs.-pole motor vehicle accident somewhere on the energized portion of the circuit. If there is a phase-to-neutral short, will those grounds re-energize the downed primary at your location? Could there be generator backfeed to the primary on the ground? Does another circuit run parallel that could cause induced voltage?

In the motor vehicle accident that occurred, the pole that was struck by the car is now cracked and tipping at the level of the communications cables. The guy wire holding the pole is broken. It looks stable enough, but how much shaking will it take before it breaks and falls? Will you follow the rules and “sound” test the pole? Let’s say another pole also was broken in half during the accident, but it’s still tied into the primary and hanging low under the weight. Are we certain the tie wire will hold? Are there any variables in terms of how tie wires are attached to the insulator? Does every lineworker tie the tie wire as well as you do?

Weighing the Consequences
Identifying the potential unknowns in a plan is a necessary safety precaution, but the work doesn’t end there. To properly evaluate a situation’s risk, you also must weigh the potential consequences of the failure to execute the work as planned. We mitigate risk based on probability and consequence. If we casually look at a potential risk and ignore it, logic states that we have already accepted the consequences of failure. Are you the worker who will suffer those consequences, or will it be one – or more – of your co-workers? For example, when we open a line, test to be de-energized, ground the circuit and handle it with rubber gloves because we are not at equipotential, is it 100% accurate for us to tell emergency medical services personnel or the fire department that it is safe for them to do their work? While the area may be safe for lineworkers who know the variables and risk involved, and who are wearing rubber gloves, is it really safe for rescue personnel?

Whether you’re planning a job or working a storm, identifying the unknowns and weighing the consequences of failure should always be part of the process. Say there is a broken pole on your job site. The plan is to set a new pole next to the broken pole. Now, the broken pole may be stable enough to perform the work, or it may not be. That means your plan is based on hope – hope that the broken pole will remain stable, and hope that nobody will get hurt if it doesn’t. Hope is not a good strategy.

During incident investigations, I’ve recognized when a worker has realized a variable on the project that went awry. After an incident, you often hear, “I was wondering if that would hold” or “We talked about the tie wire on the next pole but decided it would be OK” or “As I boomed up, I thought I might be getting close to the primary, but it was already too late.” There are many cases in which a variable is identified before the work begins, but its consequences are not properly weighed. If the failure of a variable in your job will cause work to halt, it is a critical component of your job and must be addressed.

Using the Job Brief
Critical pathways in our daily work need to be identified. These variables often are on the mind of at least one crew member. By asking every worker questions during the job brief, you can elicit some of the variables. Invite each crew member to speak about their role and any concerns they may have; this starts a conversation that has the potential to expose critical items. The entire crew can then weigh the consequences of any unknowns during a group huddle. The only prerequisite for this discussion is that the foreman must facilitate it – and it has to be a conversation, not merely a narration by the foreman. The foreman should begin by asking questions and then leave most of the talking to the crew members; a foreman’s primary responsibility is to listen and encourage worker identification of critical pathway events.

In closing, look at your own past accident investigations to see if the variables were identified and weighed appropriately. Encourage discussions at every job brief. Try not to assume an unknown will be OK. Listen for warning phrases like, “It should be fine,” “It’s probably OK” and “I think it will hold.” How we talk and listen to each other matters. We will hear about variables, risks and unknowns in those conversations. Only then can we weigh them.

About the Author: Bill Martin, CUSP, NRP, RN, DIMM, is the President/CEO of Think Tank Project LLC.  He has held previous roles as a lineman, line supervisor and safety director.