Are You Driving on Autopilot?

Written by Carl Cormier on August 10, 2018. Posted in Equipment Operations. 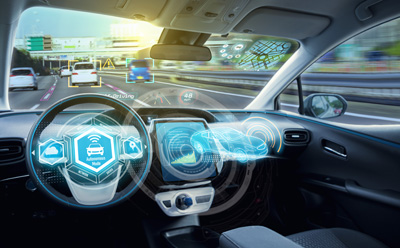 Vehicles have been evolving and manufacturers have been adding safety features to them since the first combustion-engine automobiles were manufactured in the late 1800s. By 1968, all vehicles were required by law to have seat belts, and since 1995, all passengers – adults and minors – have been required to wear them. Anti-lock braking systems became widespread in the 1970s, and the advent of airbags occurred in the 1980s.

Today, technology continues to constantly shape and change our world. It is integrated into our daily lives at work and in our homes, from personal electronic devices such as smartphones to features in our vehicles that are truly remarkable. In fact, we continue to see new and dedicated areas for testing and improvement in the automobile industry, including utility fleets. In addition, universities are devoting time and resources to studying and developing technology with the hope of educating drivers and ultimately providing safer vehicles.

The Statistics
But with all this investment in vehicle technology, are we solving problems or creating others? Are we safer now than we were in the past? Consider these 2016 statistics from the Insurance Institute for Highway Safety:

The good news is that although the U.S. population has been growing steadily since 1975, the rate of crash deaths per 100,000 people in 2016 is about half of what it was 40 years ago. The bad news is that the overall per capita death rate in 2016 increased from the 2015 rate.

That’s a problem, and we continue to have a problem. I see it daily as I drive and walk through parking lots. Every day I – and likely many of you – observe drivers behaving erratically, drifting out of their lanes, or slowing down for no reason and then suddenly speeding up. We witness drivers talking on their cellphones or looking down and texting. We also watch people walking and driving through parking lots while on their phones – and they never look up. These behaviors demonstrate the offenders’ lack of respect for themselves and the people around them.

Part of the problem is that, as technology has become part of our everyday lives, we have grown to trust and rely on it. For example, we often opt to send an email or a text message rather than make a phone call or visit someone in person. We trust technology with our finances, depositing checks using our smartphones instead of taking a trip to the bank.

I believe it is this sometimes-blind trust and the misunderstood role of technology in our vehicles that are making our roads more hazardous. Today we have a myriad of useful driver-assist technologies being used by a great number of drivers who mistakenly believe these tools will completely protect them from hazards on the road.

For instance, I’ve had drivers tell me that they no longer look in their mirrors before an intended lane change because their vehicle’s blind-spot monitor did not beep. This is obviously a problem because – although the monitor is a great tool – it may not detect motorcycles or fast-moving vehicles. Lane departure warning systems, which help a driver stay in his or her own lane, also are a great concept – except when the lane lines are covered or faded. These are just two examples of how overreliance on driver-assist technologies can potentially lead to real trouble.

Make no mistake: These technologies do work. However, because some drivers view these features as accident avoidance systems, they expect the vehicle and its technology to keep them safe and end up putting themselves at risk of easily being lured away by other distractions – such as their cellphone. This is an incredibly unsafe mindset that sets up drivers for potentially devastating events.

A Matter of Respect
The reality is that many drivers do not fully respect their vehicles, whether it is a personal vehicle or a company vehicle. I am not referring to an automobile’s level of cleanliness, but rather to how it is viewed; it’s important to always remember that driving a vehicle is a privilege, not a right. In addition, some drivers also often lack respect for other human beings while on the road. Vehicles are such an integral part of our lives that it is easy to overlook the fact that we can kill people – and ourselves – with them if we make a mistake or become distracted. We take driving for granted because it is such a consistent and mundane part of life, one that almost has become reflexive or second nature. It is something we can do with little to no thought.

Consider this analogy: You are at a gun range firing a few rounds. Would you even think about having your cellphone in one hand, sending or reading a text, as you are pulling the gun’s trigger with your other hand? Have you ever observed someone do this? I have never had anyone confirm this scenario in my years of teaching safe driving instruction. It seems crazy that you would hold a deadly weapon in one hand and a phone in the other. However, this is exactly what we do when we use a cellphone while driving. We are often more than willing to pick up a phone while steering and take our eyes off the road.

Again, the combination of a lack of respect for vehicles along with the mistaken belief that technology will keep us safe has aided in making driving more hazardous for everyone. As a result of all of the built-in technology in newer vehicles, drivers feel a false sense of safety. It is much easier to drive a vehicle than it has ever been, and therefore we are less engaged as drivers, making it seem acceptable to use phones behind the wheel. But the bottom line is that we still must actively drive the vehicle and pay attention to the road and everything that is going on around us while driving.

One driving concept that is extremely important is to look where you want to go. We must gather information from looking down the road, around the corner and at the lane next to us. We must be aware of what lies in every direction as we enter an intersection or a highway. Our eyes should be focused on what’s ahead of us and not on our devices. This is even more critical for drivers who are responsible for large vehicles – such as those used by utilities – that are more difficult to stop and maneuver than a light-duty car or truck. Because of their greater size and weight, there is less time to respond to hazards.

What Can We Do?
So, as safety professionals, what can we do to help our drivers?

We must remind them of the importance of paying attention while behind the wheel and to remain focused on driving so they can safely get to their destinations. We must create the proper company culture, one that values driving safely and makes drivers aware of what can happen in one quick, careless moment. We must provide better education about what technology can do for us, as well as its limitations. One fantastic online resource – https://mycardoeswhat.org – was developed by The National Safety Council and the University of Iowa and provides a simple guide to vehicle safety features. The site offers educational information about what specific icons and warning lights mean and how to use these safety features as intended.

There are so many safety features currently available that make it much easier than ever before to operate cars, trucks and equipment. We have backup cameras to aid in parking, vehicles capable of parallel parking themselves, and even vehicles that will pull in or back out of your garage without you in them. Yes, technology can be awesome in the literal sense of the word. And maybe someday soon we can be like characters in “The Jetsons,” riding around in completely autonomous vehicles. But in the meantime, all of us need to be engaged drivers, paying attention to and respecting our vehicles – as well as other drivers and their vehicles.

About the Author: Carl Cormier is a senior driving instructor and safety consultant for Driving Dynamics (www.drivingdynamics.com), a leading provider of advanced performance driver safety training and fleet risk management services throughout North America. He currently serves as a driver development trainer, instructing young race-car drivers on safety and driving techniques for various oval and road racetracks. Cormier also is a captain for the Davidson Fire Department in Davidson, North Carolina, where he is responsible for OSHA compliance as well as instructing and evaluating firefighters on emergency vehicle driving. Over the past four decades, Cormier has been a competitive race-car driver, participating in NASCAR, IMSA and SCCA events, and the INEX Legends series.