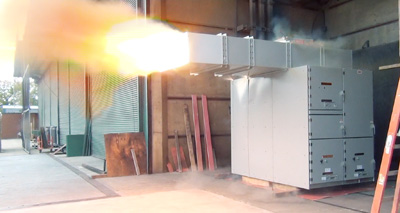 On April 11, 2014, OSHA issued the final rule regarding 29 CFR 1910.269 and 1926 Subpart V. The final rule included modifications that address minimum approach distances, fall protection systems and hazards of electric arcs. Since the publication of the rule, there have been an extensive number of articles published that detail changes to 1910.269 and 1926 Subpart V. Those articles focus on explaining the changes but most lack information about arc flash mitigating technologies.

This article focuses on current technologies available to minimize and prevent exposure of workers to arc flashes. Employers must ensure workers are provided the necessary protection against these flashes, as it can mean the difference between life and death. According to NFPA 70E, arc flash incidents occur five to 10 times each day and account for 400 fatalities each year. Additionally, the Electrical Safety Foundation International has reported that more than 2,000 workers are treated annually for flash-related burns. The severity of a flash and the related severity of injury primarily depend on the magnitude of the arcing current and the duration of exposure. A typical three-cycle circuit breaker will interrupt fault currents in 50 milliseconds. Exposure to a temperature of 205 degrees Fahrenheit for 100 milliseconds may cause a third-degree burn, which will cause skin to fall off and may result in death.

The technologies currently on the market to assist in the mitigation and prevention of exposure to life-threatening arc flashes can generally be classified into four categories: those that reduce fault currents, those that reduce arc duration, those that increase work distance and those that minimize personnel presence and exposure.

Reducing Fault Currents
It’s not simply the extremely hazardous nature of arc flashes that has spurred utilities, manufacturers and other organizations to find better ways to mitigate risk. In the utility industry, there has been an increasing focus on safety in recent years for several reasons. Power systems are becoming more complex. The amount of electrical equipment being installed in utilities, factories and urban area facilities like shopping malls is on the rise. Consequences from fatal faults and electrical failures are greater than ever. In addition, economic losses continue to occur due to electrical faults.

One type of technology available to address these issues works to reduce arc fault currents, which are electrical currents that flow through the air between energized conductors, causing a severe temperature rise that is four times hotter than the surface of the sun. The tremendous temperature of the arc causes expansion of the surrounding air and exposed metals. High pressure can cause eardrums to rupture and lungs to collapse. Material and molten metal can travel at speeds exceeding 700 mph, which is fast enough to penetrate workers’ bodies. Arc flashes can cause death as far as 10 feet away.

Fortunately, fault current reduction technology can be implemented in both newly designed systems as well as existing facilities. Most electrical distribution systems include power transformers. For a new design, the lower the size, the lower the fault currents it allows. In addition, the higher the impedance of the transformer, the lower the incident energy becomes. These two factors are controlled by the designer of the system. Keep in mind there are also a number of other factors to be considered for optimum design.

For existing systems in which the size and impedance of the transformers have been decided, there are several technologies to limit the arcing current. The essence of these methods is to reduce fault currents as quickly as thousandths of a second. Electronically triggered current limiters are one of the foremost applicable technologies. However, the same technology may cause nuisance tripping and loss of production. One of the most intelligent and unique devices on the market is the Is-limiter, produced by ABB Inc. The device is set to trip based on a specific value of current and its rate of rise. The Is-limiter acts in 0.0006 seconds, reducing the exposure to workers.

Another retrofitting device, the Ultra-Fast Earthing Switch (UFES), is actually a combination of devices consisting of detection and release electronics and corresponding primary switching elements, which initiate a three-phase short circuit to earth in the event of a fault. At fewer than 1.5 milliseconds, the extremely short switching time of the primary switching element, in conjunction with the rapid and reliable detection of overcurrent and light, ensures that an arc fault is extinguished almost instantly upon occurrence. This action achieves the highest possible level of protection for personnel and equipment.

Reducing Arc Duration
The longer the duration of an arc, the more potential it has to cause thermal damage to workers and equipment. Electrical systems are typically equipped with protection components, which include a brain (relays and sensors) and an interrupting device such as a circuit breaker or fuse. The duration of an arcing event consists of the relay or fuse operating time plus the circuit breaker or fuse interrupting time. By reducing an arc’s duration, worker safety will be greatly enhanced and equipment damage will be reduced. Among the tools and methods used for reducing arc duration are:
• Energy-reducing maintenance switches. This type of switch is used during switchgear and motor control center maintenance periods. In maintenance mode, the switch will change relay settings, minimizing delays in interrupting fault currents.
• Bus differential schemes. Relays are used to protect electrical systems and isolate the minimum portion of an electrical distribution system where the fault occurs. This is referred to as system coordination. The bus differential scheme is established to interrupt an arcing current without delays due to system coordination. The timing for the action of the differential relay can range from 12.5 to 25 milliseconds.
• Zone selective interlocking. This scheme employs a wired connection between relays and trip units. It allows quick overcurrent clearing without drastically affecting system coordination.
• Light detection relays. These relays provide a fast detection time – 2.5 milliseconds – and activate interrupting means to clear arcing faults. Light detection relays can be employed with the UFES in order to detect and interrupt an arc in approximately 4 milliseconds. Its operation includes a point sensor relay, which can be placed in a switchgear compartment or a fiber-optic sensor that can be installed across several switchgear frames. The light detection relays are adjusted to avoid normal illumination levels so they will detect and react to an arc flash event.

Increasing Work Distance
The OSHA final rule introduced higher restrictions on minimum approach distances (MADs). A MAD is the distance between the worker and where arcing can possibly start. Within the MAD, workers must be qualified to perform work and equipped with PPE, including a face shield and head protection when required.

To help increase work distance, several manufacturers now offer remote racking devices, which enable racking – connecting or disconnecting – of circuit breakers at a safe distance from electrical equipment. A remote racking device typically consists of a motor operator device that can be attached to the front of the switchgear and remotely operated so the worker will not be exposed to arc flashes associated with the subject operation. In addition, the system can be designed to include remote control of other functions.

Minimizing Personnel Presence
There are several ways to reduce personnel presence in areas where an arc flash could occur. To start, post warning labels in all of these areas. The labels must specify, among other items, the incident energy in calories per centimeter squared and the category of PPE that is mandatory for the incident energy level. Remember that anything above 1.2 cal/cm2 requires PPE.

Employers should also consider implementing arc-resistant equipment, which is designed to protect utility workers from the gases and other products of an arc flash.

Conclusion
For the safety of their personnel and the public, utility managers must continue to educate themselves and affected employees about OSHA’s final rule. The technologies available today to reduce worker exposure to arc flashes are growing in number and offer greater protection than ever before. And because they can be used with new systems or retrofitted into existing systems, it’s worth the time spent to investigate all the options.

About the Author: Samy Faried is a field application engineer and regional business development manager at ABB Inc. A licensed professional engineer, he has more than 30 years of experience in electrical power systems, including utility generation, transmission, distribution and industrial systems. Faried was previously an adjunct professor at Brown University, Boston University, Northeastern University and the University of Central Florida. He can be reached at samy.faried@us.abb.com.