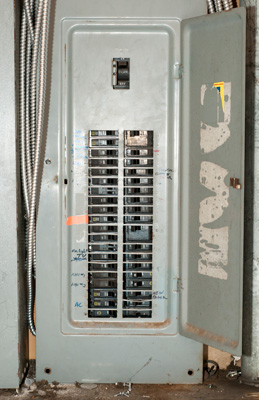 In the electric utility business, we have highly trained employees who are proud that they have learned the skills to be able to safely work around high voltage. However, a phrase we hear too often is “Hey, it’s only secondary,” which implies that secondary is not as hazardous as primary, lightning or fault current. We’re not going to debate that in this article, but we are going to discuss – and bust – some common myths about working with 120-volt circuitry and equipment, as well as myths regarding lightning and fault current exposure.

Myth 1: Circuit breakers are better than fuses.
If you utter this statement and are merely talking about convenience, you may have a cogent argument, but convenience does not outweigh safety. If you are merely talking about cost, you may again have a cogent argument, but the cost argument doesn’t win when it comes to safety because how do you put a price on a human life?

So, why might a fuse be better than a circuit breaker? All fuse manufacturer representatives will assure you that fuses in general operate faster than breakers. They may operate in less than a quarter of a cycle compared to three to four cycles for many circuit breakers. If you are in series or parallel with fault current flow, you literally are being cooked from the inside out. Reducing the amount of time the circuit is allowed to operate is a better protection strategy than allowing current flow to go on longer. Additionally, fuses typically are better at interrupting an avalanche of fault current from an incoming service. Breakers and fuses have maximum amp interruption capacity ratings, meaning if a breaker or fuse is installed on a circuit with a higher fault current capability than the breaker, the breaker or fuse can simply melt or arc across and fail to operate. The least-protective fuse interrupts 10,000 amperes of incoming energy, while a typical branch circuit breaker interrupts 5,000 amperes.

Myth 2: If you turn on a light switch with wet hands, you will get electrocuted.
While there is a possibility you might get electrocuted, you probably will not. That’s not to say you won’t get shocked; you must understand the difference between shock and electrocution. A shock occurs anytime current flows through your body, via any path, for any duration and at any magnitude. Electrocution is a shock that kills you by interfering with bodily processes. It only takes as little as 50 milliamps to send an adult heart into ventricular fibrillation; death is imminent within four to six minutes of ventricular fibrillation.

Myth 3: Golfers are more likely to get hit by lightning than other sportsmen.
This is a popular myth because it is easy to believe a golfer, standing on a course holding a metal golf club, could be struck by lightning. But consider how much more likely it would be for a bolt of lightning to strike a boater or a fisherman on the water holding a fishing rod. Golfers have clubhouses they can retreat to if the weather gets bad; fishermen only have their boats. If you have to be on the water during a thunderstorm, don’t fish with a pole in the air. Lightning is always looking for a low-impedance path for current flow to neutralize the accumulated charge on the bottoms of the storm clouds.

Myth 4: Aluminum is a bad choice for wiring.
This myth sprang up in the late 1960s when aluminum wire was being used in branch-circuit-sized conductors. Insurance companies got involved when it was determined there was an inordinate number of fires in homes wired with branch-circuit-sized aluminum wiring. After gathering lots of anecdotal evidence, the insurance companies called for a stop to the use of the wiring. The evidence pointed to the fact that because of aluminum’s high expansion/contraction coefficient, whenever an aluminum wire was tightly terminated under a brass binding terminal on a duplex receptacle or other device, and then current was run through the circuit, the aluminum would expand more than the termination provisions. This caused an extrusion or flow from under the binding terminal over many loading opportunities. When the current stopped and the conductor cooled down, it would not flow back under the terminal and would thereby lead to a loose connection. Loose connections anywhere in the electrical system are known as high-resistance faults. The loose connection increases in impedance and acts like a load, dropping voltage and creating heat and ultimately fires if allowed to persist.

Consequently, branch-circuit-sized aluminum conductor was systematically outlawed in the U.S.; you can’t buy it now if you wanted to. Yet feeder-sized aluminum wire was given new momentum because the aluminum industry did three things to deal with the high-resistance short issue. First, they changed the alloy to make it more durable. Second, they specified connection only to AL-rated termination provisions. And third, they gave us joint compounds to inhibit corrosion. Now feeder-sized aluminum wire – #8 AWG and larger – often is preferable to copper, even though it has a somewhat higher resistance, because it is cheaper, has a lighter weight and is just as flexible. So, with all the fixes by the industry, aluminum is not the bad guy in feeder sizes or for services.

Myth 5: Fault current is always looking for ground.
If you talk to many electricians, you likely will hear this myth, but it is especially prevalent among non-electricians. Essentially there are three reasons breakers trip and fuses blow: overloads, short circuits and ground faults. These three simply are different paths for fault current to follow. In the case of an overload, the current follows the normal path, out on the hot and back on the neutral. Overload is a product of current and time. If there is too much current flowing in the normal path over a designed time period, the breaker will trip. In the case of a short circuit, the fault current flows in the normal hot-to-neutral path, but it is absent the normal limiting effect of the load, so too much current flow trips the breaker. The third case, a ground fault, occurs when fault current does not follow the normal hot-to-neutral path. A ground fault circuit interrupter breaker has sensors in both the hot side and the neutral side of the circuit. As long as the current flow on the hot side is equal to the current flow on the neutral side, the condition is normal and the circuit breaker acts as a normal current load breaker. If current leaves the circuit by way of some other path – such as a conduit, panel or person – the circuit across the two sensors becomes unbalanced, instantaneously opening the breaker. It usually takes less than 5 milliamps to open a ground fault circuit interrupter breaker, well below the injury threshold for a person.

Myth 6: If you want more light, all you have to do is use a higher-wattage bulb.
While it is true that a higher-wattage bulb will provide more lumens, installing one in a lamp is not all you have to do. All fixtures and lamps come from the manufacturer with the maximum wattage they are UL-listed to accommodate; this is typically 60-watt incandescent. If you were to use a higher-wattage bulb, the fixture may not be able to dissipate the heat generated by the higher wattage, which could result in a fire. If you want more light, use an unfrosted (clear glass) lamp, or try using an LED lamp that generates less heat while providing more lumens. As a bonus, the lamp life will be substantially improved.

Myth 7: A GFI is the same thing as a GFCI.
It’s true that a ground fault interrupter and a ground fault circuit interrupter respond to the same fault condition – a ground fault – but they are used in significantly different ways. A GFI usually is found at the main service or a feeder panel, is set to trip with a time delay and trips at 30 milliamps or more, thereby only protecting equipment from ground fault conditions. On the other hand, a GFCI is employed at the branch circuit level and trips at 4 to 6 milliamps in a fraction of a second, thereby protecting people.

Summary
There are self-appointed experts all around us, and some of what they espouse may be conventional wisdom or old wives’ tales. It helps to have some insight into the rationale behind the actual safety issues, which can be garnered by reviewing manufacturers’ recommendations, UL listings and labeling criteria, among other things. Next time someone you know assures you they know what they’re talking about, be sure to do your homework.

About the Authors: Dave Johnson, CUSP, is a consultant for the Institute for Safety in Powerline Construction (www.ispconline.com). After serving in the U.S. Army, he completed a four-year apprenticeship in the electrical industry, eventually becoming a journeyman and a master electrician in the state of Utah. For approximately 20 years, Johnson has provided apprenticeship training, safety training and adult education for schools and private companies across the Western U.S. Over the past 10 years, he has specialized in NEC update training and OSHA safety training with the Mountain West OTIEC.

Mack Turner, CUSP, is the executive director of the Institute for Safety in Powerline Construction (www.ispconline.com). He has more than 25 years of experience in the electric, gas and communications utility industry, specializing in safety, risk and leadership disciplines with a focus on positive cultural change. Turner also is president, board chairman and a founding member of the Utility Safety & Ops Leadership Network (www.usoln.org), the sponsoring organization of the Certified Utility Safety Professional credential program.