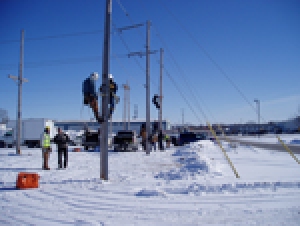 Alliant Energy (AE) management and International Brotherhood of Electrical Workers (IBEW) union personnel began looking at the 100 percent fall protection issue about four years ago. AE is comprised of two utilities: Wisconsin Power and Light (WPL) and Iowa Power and Light (IPL). Union workers are represented by five IBEW locals. Internal statistics regarding falls during climbs on wood poles showed numbers in the teens over the last few years and a trend of near misses and minor injuries.

Easing into 100 Percent Fall Protection
Believing that fall protection straps would probably be required devices in the future due to best practices or regulation changes, and that this would be a big cultural change for climbers, a joint management and union team was formed to look into the issue. AE energy delivery business units have multiple “Blue Hat” safety positions in different departments depending on their expertise. The Blue Hats help implement, promote and enforce safety rules and policies. The electric-related Blue Hats – one from WPL and one from IPL – were asked to participate in the joint effort. Management safety professionals, technical trainers and the two union Blue Hats conducted a brief trial on three fall protection straps.

The decision was then made that, after training was completed, all new apprentices hired would be required to use fall protection straps when climbing wood poles. This decision was shared with all climbers and included information about the type of straps apprentices would be required to use. The same straps were offered to all climbers to use voluntarily; a few seasoned climbers took advantage of the offer. With time, the apprentices and seasoned climbers proved they could become proficient in using the straps.

Fall Protection for All Climbers
In the fall of 2010, management and union representatives addressed the issue of 100 percent fall protection for all workers as part of the overall philosophy of zero injuries to employees.  Knowing this would be a volatile issue with some workers, research was done on how other companies had rolled out the use of these straps to see what worked and what didn’t. Based on that information, the following plan was put together.

As part of an agreement between union business agents and company management, a team was formed that included six union members representing climbing positions, the Blue Hats, and five management safety and technical training employees. The team’s goal was to research the latest equipment and develop a training and implementation plan for all climbers. The union representatives researched different IBEW locals to get fall statistics, to see if they had a 100 percent fall protection program and to learn which equipment they used.

Manufacturer representatives were contacted regarding various climbing straps and asked to attend the training and trial session at one of the AE training centers in Marshalltown, Iowa. At that session, the climbers were instructed on the features and uses of the various straps. Rigorous climbing on various equipped poles – such as poles with conduit, U-Guard and pole steps – was performed. Climbers intentionally “cut out” to see how the straps performed. The team narrowed the selection of straps down to three. One fact that the research with other companies showed is that giving climbers a choice of straps made implementation a more positive experience.

Body Belts
In order to add a measure of safety, the decision was made to change over to a four D-ring system that accommodates separate connection points for the climbing strap and a secondary lanyard that make up the total fall protection system. Two types of body belts were selected: a four D-ring “backsaver” type belt for the climbers who had this style belt and a D-ring-equipped “gut strap” for those climbers who had a traditional climbing belt. The manufacturer’s representative and various team members measured climbers throughout WPL and IPL. The belts were then ordered and sent out to the various employees.

Rollout and Training
The next phase to be addressed was how to roll out the program and train everyone. The Blue Hats went to their respective workers in WPL and IPL and asked for volunteer trainers for each region. Twelve trainers were selected for each company. A train-the-trainer session was held, using manufacturer representatives and trainers, for the 24 trainers at the Marshalltown and Fond du Lac, Wis. training centers. Trainers spent the day receiving instruction and then had climbing practice with each of the three climbing straps.

To roll out this training to all climbers across the large service territory, various locations built a three-pole training and practice setup. The poles were equipped with pole steps – or bolts to simulate steps – as well as U-Guard, secondary wire, neutral wire and crossarm equipment to practice climbing on, around and over. The trainers met with four climbers for a four-hour session and instructed them on the features and uses of the three straps and secondary lanyards. At that time, each climber was asked to choose one of the straps. The trainer compiled a list for that location and straps were then ordered.

When the straps are delivered to the individual employee, that employee is given dedicated training time for the first few weeks to practice using the strap and secondary lanyard.

Commitment to Use the Equipment
The last phase of the implementation process is a pending agreement to be made between the union business managers and company management that, after a certain grace period for practice and getting comfortable with the climbing strap, the use of this equipment is mandatory and a condition of employment.

To date, the implementation is going well. Employees are finding at least one of the three straps offered to their liking. The success of this program has a direct relationship to the company and union’s commitment to employee safety. They are working together to choose and then train on the best available products, with a commitment to proper training and use of the products.

About the Author: Kevin Severson is a senior safety consultant for Alliant Energy. He has 33 years of electric and gas utility experience, with 17 years as a lineman and 16 years in the safety field.